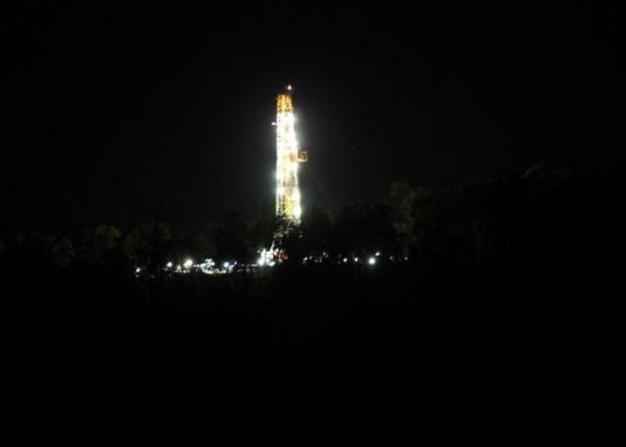 A study released by a team of Penn State scientists found evidence that groundwater near a shale gas well in Bradford County, Pennsylvania, was tainted from chemicals used in hydraulic fracturing and drilling for natural gas. The study suggests the chemicals traveled through sideways cracks in the ground.

The study was published in the Proceedings of the National Academy of Sciences.

One of the authors, Susan Brantley, distinguished professor of geosciences at Penn State, said the results were the first to show chemicals used in drilling migrating through rock formations. And they went a good distance—1 to 3 kilometers.

“We really laid out all the data and showed that it did move through the rock at shallow and intermediate depths, and it moved a long way,” Brantley said.

The study used well water data collected on behalf of three families which sued Chesapeake Energy, after the company drilled a series of faulty wells near them in late 2009. They settled with the company for $1.6 million, but refused to sign non-disclosure agreements.

Shortly after the wells were drilled, the homeowners began complaining about bubbling and cloudiness in their water. Some had foaming in their water “like shaving cream,” Brantley said.

The Pennsylvania Department of Environmental Protection (DEP) investigated; it found natural gas had migrated into the groundwater and cited the company.

Based on these and other violations, Chesapeake agreed to a consent agreement with the DEP in May, 2011, agreeing to pay a $700,000 civil penalty and to donate $200,000 to the DEP’S Well Plugging Fund.

Eventually Chesapeake tried to fix the problems by further cementing the wells.

As part of their settlement with Chesapeake, the three families agreed to sell their homes to the driller. Crucially, they refused to sign the non-disclosure agreement, which would have prohibited them from sharing the results of their water tests with anyone, including scientists.

After the final settlement, Garth Llewellyn, a hydrogeologist with Appalachia Hydrogeologic & Environmental Consulting, which conducted water tests for the plaintiffs, contacted Penn State scientists to see if they would analyze the water. Llewellyn was the lead author of the study.

“There was clearly other issues here. There was unnatural foam discharging from these wells,” said Llewellyn. “We wanted to investigate further.”

The Penn State scientists, which got support for the study from the university and National Science Foundation, found chemical compounds similar to those found in fracking wastewater. They also found 2-n-Butoxyethanol—2BE—a chemical used in drilling fluid and in the hydraulic fracturing fluid for some of the wells drilled by Chesapeake.

The EPA has identified 2-BE as a possible “indicator of contamination” from fracking activities.

The study found nearby gas drilling activities were “the likely cause” of the contamination.

In an emailed statement, Marcellus Shale Coalition spokesman Travis Windle said the industry has improved “through important technological advancements” in the years since the wells in question were drilled.

The authors admit their conclusions have limitations. “It is not possible to prove unambiguously that the (chemicals) and 2-BE were derived from shale gas-related activities,” the paper states. The paper added that no chemicals “were detected above regulatory drinking water standards.”

Brantley said even if the water didn’t exceed drinking water standards, what came out of the private wells was alarming.

“I’m a geologist—I don’t think you would want to drink this water—if for no other reason than it was foaming,” Brantley said.

Brantley said it was unlikely that the contamination came from deep underground in the Marcellus Shale, since the salts that are so prevalent in that formation were not present in high concentrations. One possibility is that a leaky storage pit may have been the source of the contamination, or it came from the faulty wells that Chesapeake drilled.

The steel and cement casing for the wells only went down about 1,000 feet. Below that, the wellbores were open rock. Brantley believes it was through this open part of the wells that the chemicals may have escaped.

She added that it appeared that safeguards put in place since the wells were drilled may make this type of contamination less likely. In 2011, the state increased its casing requirements, including provisions that required companies to better protect groundwater and prevent gas migration into coal bed seams.