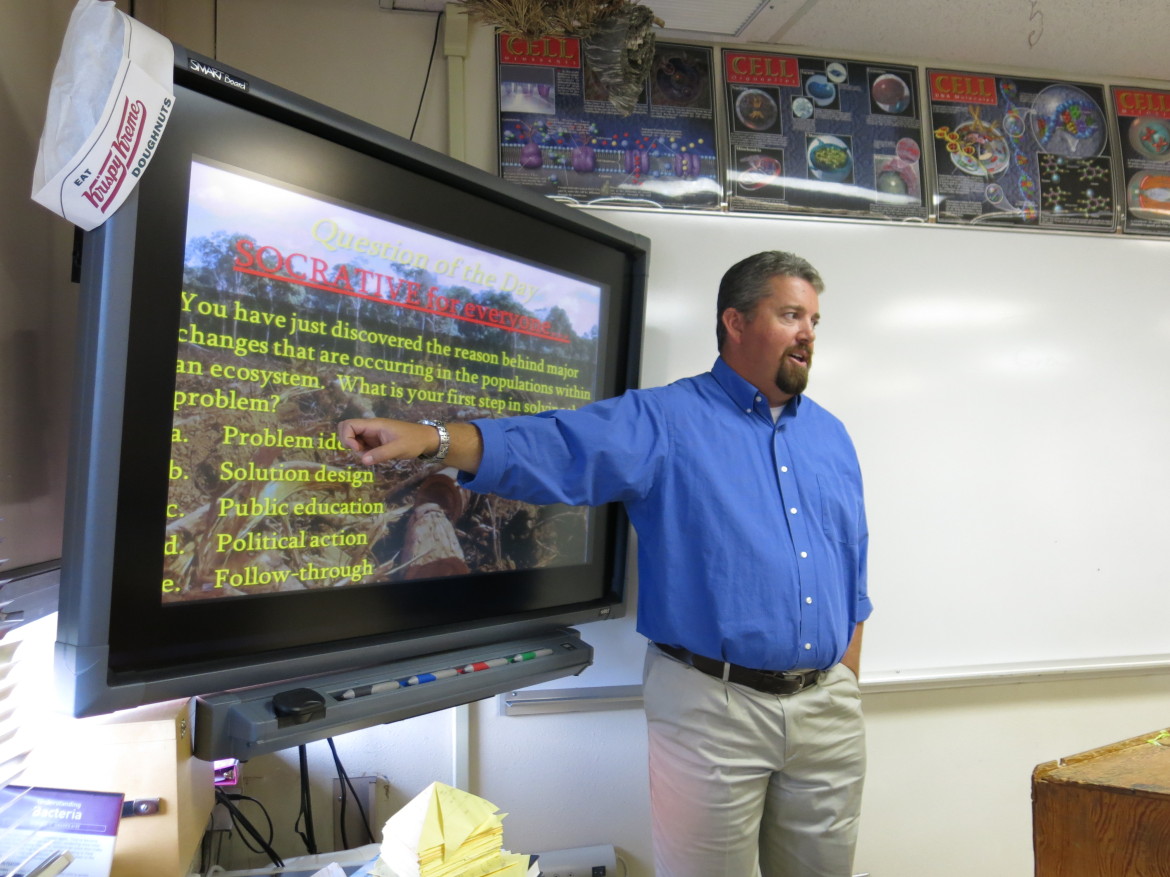 Natalia Macker, who is running to represent District 22 in the Wyoming State House, said something shocking during our recent interview:

Nothing about these beliefs is inherently extreme, but for someone hoping to win an election in Wyoming, saying those words with a tape recorder rolling is really, really unusual. Natalia Macker, candidate for Wyoming’s state house, door-knocks with her family near their home in Hoback Junction.

As election day approaches, candidates are using the controversial issue of climate change science in the classroom to mobilize their bases.  This is especially true in Wyoming, because with just over half a million residents, elections are generally decided by just a handful of votes.

The issue revolves around something known as the Next Generation Science Standards, a framework for science education created through a 26-state collaboration of teachers, scientists, policy analysts and business leaders.  So far, 12 states, plus the District of Columbia have adopted the standards. Wyoming, however, has put the issue on hold, through a footnote in this year’s state budget that took away funding “for any review or adoption” of the NGSS. Macker’s challenger, incumbent Marti Halverson, objects to a small but controversial part of the NGSS.  The part that attributes climate change to energy development:

“Human activities, such as a release of greenhouse gases from burning fossil fuels, are major factors in the current rise in Earth’s mean surface temperature (global warming).”

Halverson emphasized several times during our interview that she thinks climate change is real.  But she doesn’t believe there is proof that links it to human activity.

The existence of climate change and it’s cause are both points of national contention: in the White House, on the streets of New York, and in elections all over the country.  But in Wyoming, the controversy is particularly fraught due to the state’s reliance on its massive energy industry for revenue and jobs.  In 2013, coal mining generated over $1 billion in revenue for the state, and Wyoming’s school system runs almost entirely on mineral royalties. I visited Pinedale High School, in western Wyoming, where energy development affects almost everyone: The natural gas industry employs one out of every two workers in the county.  The day I visited, students in Michael Gregory’s sophomore biology class were learning about the relationship between energy and the environment. They were brainstorming human impacts on the environment and how they could be fixed.  One groups of girls suggested global warming.

Gregory said his students are curious precisely because they live in an area where energy is king:

“You can tell the kids are trying to form an opinion because they understand the importance of it to their families,” Gregory said.  “It forces them to consider the overall impact a lot more than students in other places would if you brought the same topic to them.” For some historical context, I called Glenn Branch, Deputy Director at the National Center for Science Education, a group that advocates for the NGSS.  He compared the current debate over climate change in the classroom to the age-old debate over evolution:

But in an energy state like Wyoming, climate change is about more than just (pseudo) science.  Lawmakers and candidates alike have a complicated line to walk, balancing economic, environmental and educational priorities.

Update: On Monday March 2nd, Wyoming Governor Matt Mead signed a the bill that reopens discussion of the Next Generation Science Standards. The state’s board of education plans to take up NGSS at its March meeting.

Update: On Monday January 19th, the Wyoming House of Representatives voted to repeal the ban on funding the discussion of adopting the Next Generation Science Standards.  That bill now goes to the Senate.