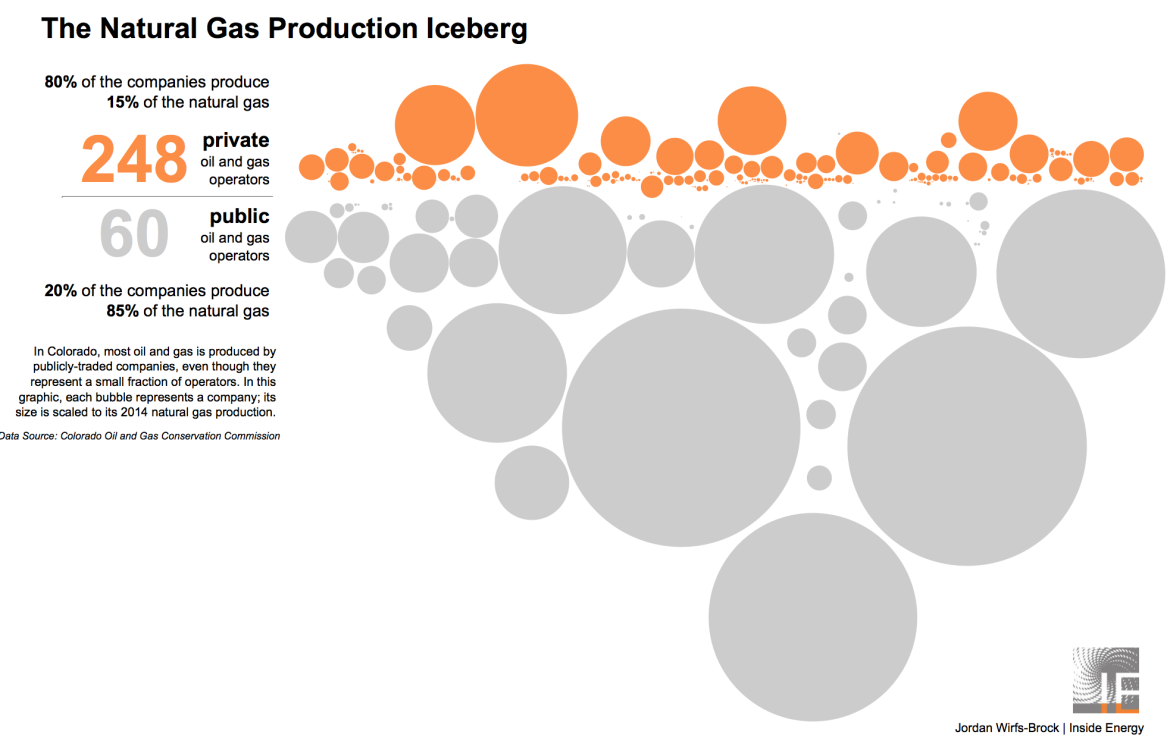 But we have very good reasons for going down this rabbit hole. Ever wonder about oil and gas’ private side? We do…

As $75 a barrel oil prices shift from news to the new normal, we’ve been hearing a lot of questions about what this means for everything from your personal finances to the global economy.

In the midst of this, it’s important to understand the fundamental difference between public and private companies:

We can see in real time how oil prices affect public companies like Anadarko or Royal Dutch Shell through their stock prices. But private companies are a black box. The oil and gas industry is a major player in the U.S. economy, so how much of that industry is in that black box?

For now, we are going to focus on Colorado, Inside Energy’s home base, which ranks sixth and seventh in the country in natural gas and oil production, respectively. In 2014, 313 operators produced oil or gas here, based on data from the state oil and gas commission. Of those,

The vast majority of oil and gas operators in Colorado are privately owned. But when we look at production, the private/public ratio flips: One-fifth of the companies are making more than four-fifths of the oil and gas. Let’s start with natural gas. Year to date, Colorado has produced 1.2 billion Mcf of natural gas (one Mcf equals the volume of 1000 cubic feet of natural gas) – enough to cover roughly 17 days of U.S. natural gas use – which is split like this:

And what about crude oil? So far this year, 46 million barrels of oil have been produced in Colorado. (For comparison, last year the state set a record with 64 million barrels – enough to cover roughly three days of U.S. oil consumption.) And here’s how that production breaks down: In Colorado, the private oil and gas sector is basically the opposite of the TARDIS: smaller on the inside than on the outside.

There are a lot of privately owned oil and gas operators, but they aren’t producing a lot. So, in Colorado at least, the black box is big, but it doesn’t hold very much. For any Doctor Who fans out there, private oil and gas companies are basically the opposite of TARDIS.

This private versus public question, as any good question does, gives rise to others:

As Inside Energy continues to investigate the money behind oil and gas, we’ll look at these questions as well as others. Is there something you’d like us to explore? Send us your questions on Twitter @insideenergynow or email us at info@insideenergy.org.