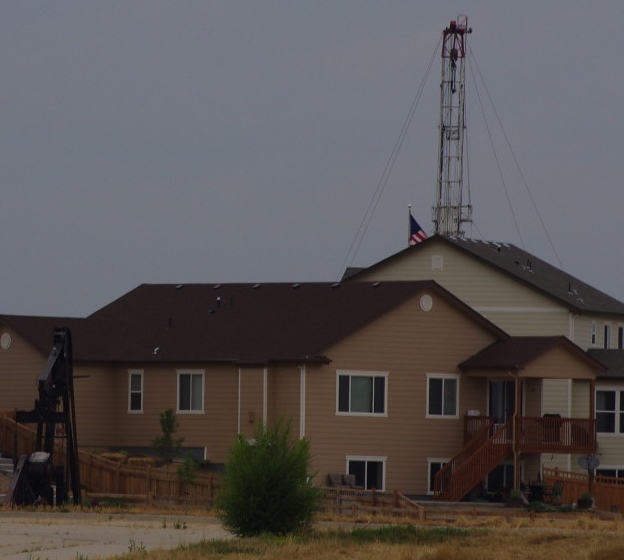 A pump jack sits in front of a house in northern Colorado. A drilling rig sits behind it.

A month ago, something happened that many never imagined possible: Voters in Denton, Texas passed a ban on fracking.

In New York and even in Colorado, fracking bans weren’t particularly shocking. But Texas? As the oil and gas industry navigates this latest energy boom, it’s facing a new and sometimes fraught relationship with the American public.

On the front lines are people like Alex Hohmann, a 30-something, fresh-faced engineer who currently holds the title of Stakeholder Relations Manager for Anadarko Petroleum. In previous jobs, he designed systems to more efficiently tap oil reservoirs, but now, he’s responsible for the much squishier task of getting neighbors’ blessings for Anadarko’s drilling projects in northern Colorado.

“It’s tantamount to Relationship 101,” he explained. Part of the job is talking to neighbors before drilling happens, fielding their phone calls about bright lights and loud trucks while it’s happening and coming up with solutions that allow the company to profit, without ruining the lives of people who live nearby.

That may not sound revolutionary, but for the oil industry it is. For most of oil history in this country, securing mineral rights and having government permits in hand were considered all the permission companies needed. But as friction with communities in places from Texas to New York suggest, that’s no longer the case.

Hohmann says companies ignore that current reality at their own financial peril.

Social license is a technical term coined two decades ago by Jim Cooney, who was then an executive at one of Canada’s largest mining companies.

Cooney was racking his brain for a concept to describe why projects from Peru to Angola were getting delayed and shut down by protests. The companies lacked “social license,” he told the audience.

“Proposed the term almost as a black box, to indicate that there was something else out there that wasn’t covered by your government permits,” he said.

The term caught on. Today, it’s common parlance in the international mining sector. Banks ask for a social license plan before issuing loans, mining companies talk about strategies for acquiring social license and academics write papers about how to know when you have it. Acceptance of the idea didn’t come easily though, according to Cooney. He remembered being at an industry conference when an executive from the world’s largest mining company stood up to share his thoughts on the concept.

“He says, ‘It tastes terrible, it sticks in my throat but I figure I’ve got to swallow it for my own good.’ I like to say it was with that degree of enthusiasm that the mining industry crossed the line and adopted sustainable development.”

All signs point to social license being no less of a bitter pill for the oil and gas industry, although some are taking steps in that direction. Earlier this year the American Petroleum Institute issued its first ever community engagement guidelines. David Miller is the group’s director of standards.

“The more you communicate, the more transparent you are, the more open you are to having those conversations, the better off everyone will be,” he said.

Not everyone is on board with that message though. Behind closed doors, some in industry are talking a different game. At a recent meeting of oil and gas executives, a lobbyist was secretly taped telling the crowd to prepare themselves for “endless war” against the opposition.

“Fear and anger have to be part of this campaign,” he said.

“The perception has been that society needs them more than they need social approval or anything from society,” he said.

But as oil and gas move in closer and closer to communities and frustration builds, that attitude may need to change if the industry doesn’t want to get shut out of its lucrative drilling prospects.