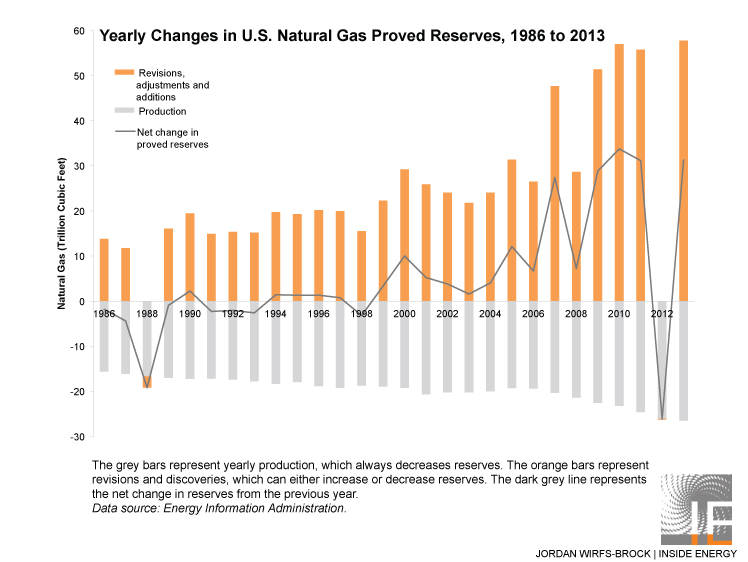 Reserves. I’m not talking about The Fed. Or football players on the injured list. Or the four U.S. towns with that name (in New Mexico, Montana, Kansas and Louisiana). I’m talking about our energy supply.

How much natural gas, oil and coal is in the ground and how long can it meet our needs? The answer lies in reserves, our supply of non-renewable energy. The Energy Information Administration recently published its latest report on oil and natural gas reserves, announcing that natural gas reserves are at a record high.

Based on data from the EIA, here’s how U.S. natural gas reserves have changed over the past 30 years: So why the big spike in reserves?  And how does that relate to production?  If you know anything about the state of U.S. energy, you know that natural gas production has spiked in recent years.

If production is spiking, how can reserves be going up, too?

To answer this question, we need to understand what reserves are. When I first heard the term reserves, I assumed it simply meant how much oil, natural gas, or coal is left in the ground. Not so. The EIA uses several terms to describe different sub-sets of the oil and gas supply. The ones you’ll see most often are:

Remaining in-place means all oil and gas left in the ground, regardless of whether we can extract it.

Totally technically recoverable (TTR) resources are oil and gas that we can extract using current technologies, whether or not it makes financial sense to do so.

Proved reserves  are oil and gas that, according to the EIA, “that analysis of geologic and engineering data demonstrates with reasonable certainty are recoverable under existing economic and operating conditions.” Let’s unpack that: Proved reserves are estimates of how much oil and gas we can access with current technologies and under current economic conditions. When you hear people talk generically about “reserves,” they are usually referring to  proved reserves.

All of these concepts are estimates. They change constantly as geologists discover more oil and gas, business conditions change, and technology advances. To understand this better, let’s focus in on U.S. natural gas reserves and how they’ve changed over time as a case study.

Proved reserves have doubled since 1999 from 176 trillion cubic feet (or Tcf, a standard unit of measurement for natural gas) to 354 Tcf. If we could freeze the world at its current state – same natural gas prices, same companies, same number of rigs, same technology, same geology, same level of production – but let the clock tick forward, how long until the proved reserves would be exhausted? At the end of 1997, when the reserves’ time horizon was at a 30-year low, we were producing natural gas at a rate that would have exhausted the proved reserves by the end of 2006. But our reserves haven’t gone to zero. Instead, they’ve grown.

How? Every year oil and gas companies extract between seven and 12 percent of proved reserves. But that gets offset by discoveries of new gas formations or extensions of existing ones. As the capacity of companies increases or decreases, the estimate gets adjusted up or down.

Over the past several decades, here’s how proved reserves have changed – with production and adjustments – year-to-year based on EIA data: Natural gas reserves have been increasing since 1999 as wide adoption of hydraulic fracturing and horizontal drilling techniques opened up shale and tight gas plays. A notable exception is 2012. That year, average natural gas prices fell by a third, driving reserves estimate down for the first time in 14 years even though new formations were discovered.

Why do reserves – and how we define them – matter? Our energy future isn’t simply a matter of geology: It’s a matter of economics, technology, and geopolitics. These factors influence, and are influenced by, reserves. Plummeting oil prices can launch a chain reaction: An individual oil and gas company’s reserves aren’t worth as much, which lowers the company’s value and hinders its ability to borrow money, which slows its ability to actually produce oil or natural gas.

Which is why reserves, and the distinction between proved and unproved resources, aren’t just esoteric pieces of energy trivia. And why Nature’s recent article and editorial on the discrepancies between natural gas production forecasts (not the same as reserves, but related) is causing such a stir and inspiring critical rebuttals from the EIA and researchers at University of Texas.

Inside Energy will be continuing to untangle this topic, including examining the unproven piece of the reserves pie and evaluating how accurate past energy predictions turned out to be. So stay tuned.