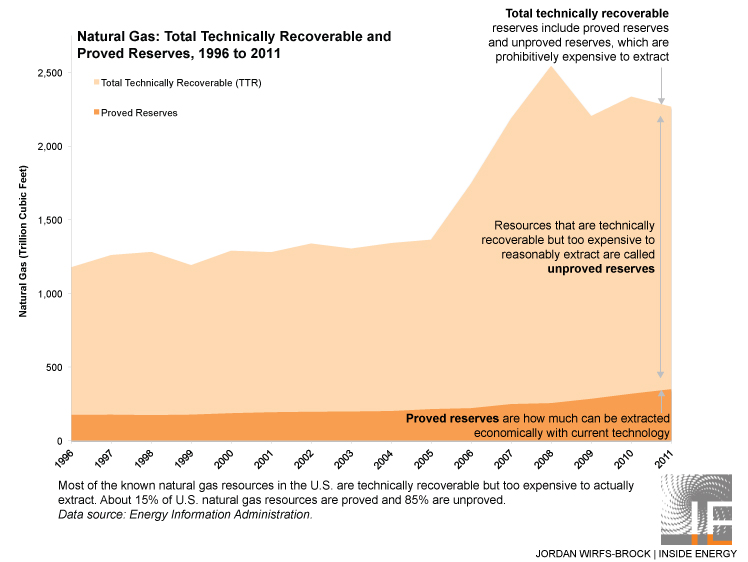 Just when you thought you’d wrapped your head around energy reserves, the plot thickens.

Last time, we learned how it’s possible for “proved” U.S. natural gas reserves to be at an all time high, even as production has risen every year for more than a decade. Wouldn’t we expect reserves to be more depleted today if we’ve been using more and more of a resource each year over the last decade?

But when it comes to oil and gas, proved reserves are only part of the picture — and a small part, at that.

The vast majority of natural gas left in the ground is “unproved.” This means that we cannot readily access it because the infrastructure is not in place, or it doesn’t make financial sense, or the presence of natural gas is assumed but not confirmed. Only a small sliver — about 15 percent — of technically recoverable natural gas in the U.S. is proved. The rest, around 85 percent, is unproved.

Like proved reserves, unproved reserves change over time and have also spiked in the past decade. Here’s how proved, unproved, and technically recoverable natural gas resources have changed over time based on data from the Energy Information Administration: The EIA’s 2012 estimate for technically recoverable natural gas in the U.S., 2,266 trillion cubic feet, would last between 80 and 90 years at current production levels — if, of course, that estimate is accurate and if we develop the infrastructure to access it. Note that those ifs are not trivial.

The further we look beyond what the wells can actually reach at this very instant, the murkier estimates get. Think of the line on the graph above showing technically recoverable resources as fuzzy, not solid: There’s way more natural gas in the ground than we can access right now. However, it’s more appropriate to look at unproved natural gas as a question mark rather than a stockpile.