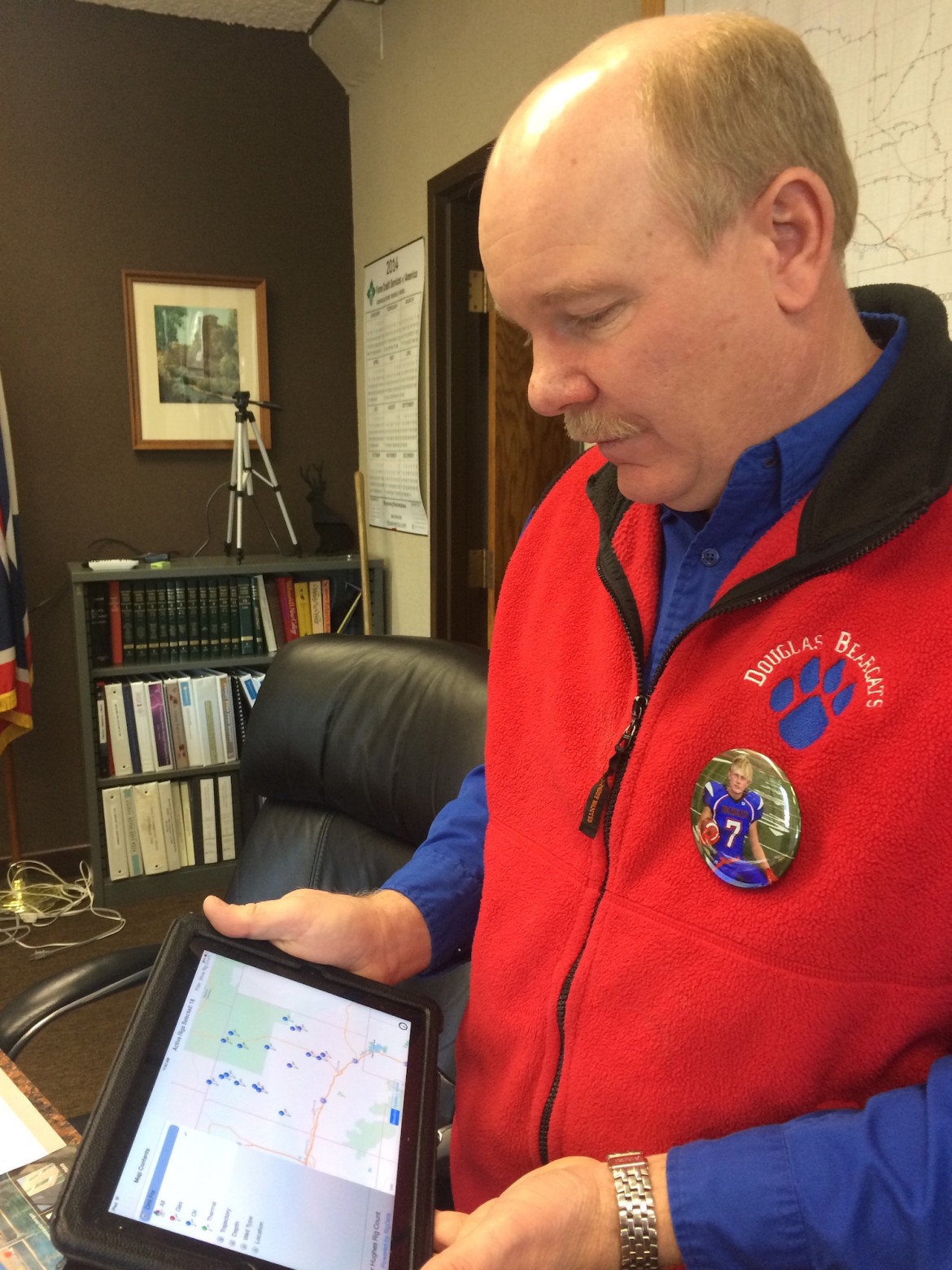 Jim Willox, chair of the Converse County Commission, doesn't like the word "boom" to describe the energy development happening in eastern Wyoming. Here, he shows off a map of oil rigs operating in Converse County. Jim Willox, chair of the Converse County Commission, doesn’t like the word “boom” to describe the energy development happening in eastern Wyoming. Here, he shows off a map of oil rigs operating in Converse County.

It’s almost two o’clock in the afternoon and the lunch rush at The Depot restaurant in Douglas, Wyoming is just beginning to taper off.

“It’s very, very busy. We have a waiting list a lot of times at lunch. Busy place,” owner Linda York says, practically shouting over the din of the remaining customers.

A waiting list, for lunch, in a tiny town in eastern Wyoming. York never imagined that kind of demand when she opened the restaurant four years ago, but as oil production has taken off in the surrounding areas, so has York’s business.

There are lines at the gas stations in town and help wanted signs in windows. It’s not North Dakota, but Douglas feels busy…bustling. That other b-word — “booming” — you won’t hear many people using it, including county commissioner Jim Willox.

But a boom? Willox would rather you didn’t call it that. He says it has a negative connotation — of things spiraling out of control. Think about the headlines you read about the boom in North Dakota: housing shortages, crime, dangerous roads. So Willox doesn’t like the word, but what is a boom, really?

Economist Rob Godby says, that’s actually kind of a difficult question. “There’s no real formal definition. You kind of know them when you see them,” he says. Broadly speaking, a boom is just significant growth in a single sector of the economy. That growth causes other economic activity to distort in order to accommodate it. “It’s almost like a virus that spreads through the economy affecting more and more sectors,” Godby says.

In small economies, the effect is magnified. Converse County, which includes Douglas, is home to just 14,000 people, and its economy has traditionally been based in coal mining and agriculture. These days, it’s clear that oil is the new economic driver — from the huge trucks carrying water and sand for fracking, to the overflowing RV parks. Most people think of booms as bringing an influx of new people and capital, but Godby says one of the most defining characteristics of a boom is that it swallows up the existing economy.

“What previously wasn’t associated with that sector now becomes also dependent on that, whether it’s the local McDonalds restaurant or the local machine shop.”

Short-term, that’s a good thing; but in the long-run, Godby says dependence on one sector leaves those businesses — and the entire economy — vulnerable, because then even a small change in that sector, like a slide in oil prices, can bring the whole thing crashing down.

“Booms tend to be very temporary and no one wants to really believe that,” Godby says.

Which might be part of the reason why people like Jim Willox don’t like the word. He wants Converse County to prosper in perpetuity — not just for a little while.

“People in Converse County remember the 80s, when things were not good,” he says. “And we know that we’re in a pretty good time now. And neither extreme is where we want to spend a very long time, but we’re here, and so we deal with it.”

But finding the fine line where you get the benefits but don’t suffer the negatives is difficult — especially in small economies where everyone is benefiting from the boom.

“Somebody trying to slow it down is in a sense…they’re really worried that they’ll kill the goose that lays the golden egg, and so they’re very cautious about control,” Godby, the economist, says.

He notes that it’s this tension that keeps the cycle going, over and over. It’s the reason those bumper stickers exist: “Please Lord, give us another boom. We promise we won’t waste it this time.”