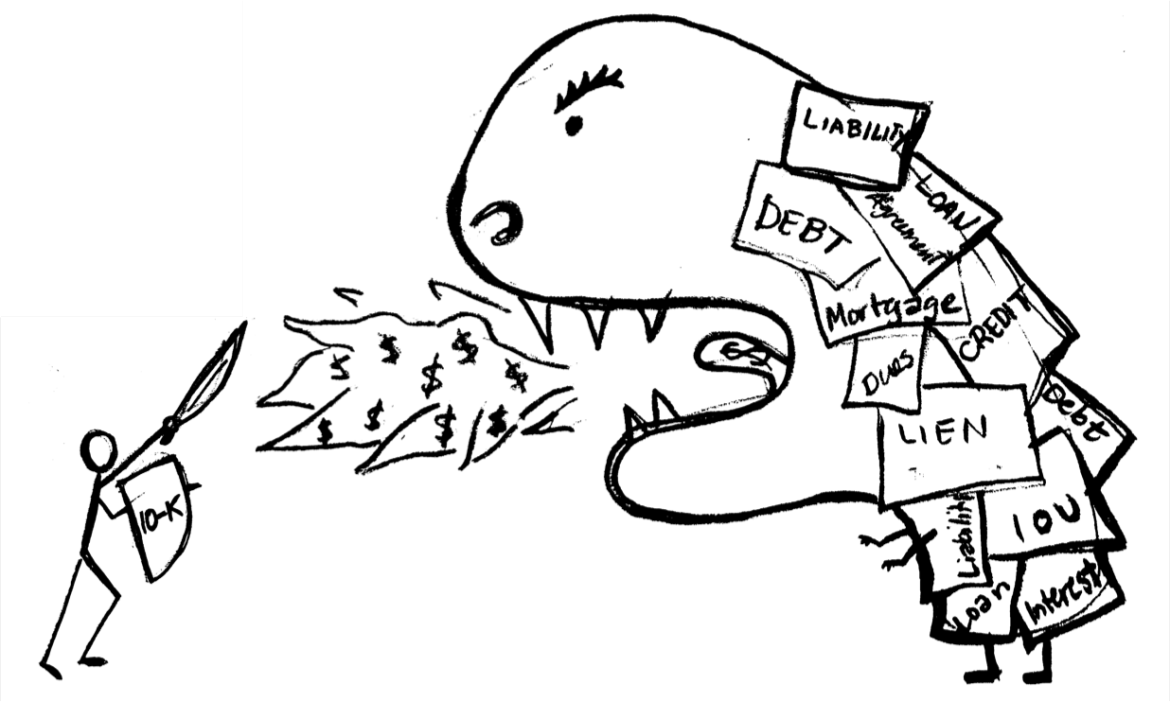 Understanding how debt plays into the web of a company's finances was a beast - nay, a monster. We faced the Debt Monster with only 10-Ks to protect us.

Oil prices have dropped fast enough and long enough – 57 percent since June 2014 – that the initial price dip has become a veritable plunge, inspiring analysts and journalists to scrutinize the financial stability of oil and gas companies and the banks that fund them. Much of this scrutiny – including Inside Energy’s coverage – has been focused on the companies’ mounting debt loads.

Why does this matter? The health of the oil and gas industry, and of the banking system that has bankrolled it, are a key part of U.S. economic recovery. The more we learn about energy financing, the more we realize debt is just the beginning of the story. So we wanted to know:

To monitor the financial health of oil and gas companies, what else besides debt should we keep an eye on? Understanding how debt plays into the web of a company’s finances was a beast – nay, a monster. We faced the Debt Monster with only 10-Ks to protect us.

In answering this question we learned two very important things. First, the financing and operations of a company are a unique and intricate web. Therefore, it’s difficult to come up with a single, comprehensive measure of financial health that lends itself cleanly to cross-company comparisons. Second, journalists are not accountants: Our goal with this investigation is to illustrate and decode several important financial indicators for some of the most prominent oil and gas companies operating in Colorado.

To do this, Inside Energy examined the financial statements of ten oil and gas companies operating in Colorado: nine of the largest publicly-owned operators based on oil production volume, as well as one other company, Linn Energy. Why Linn? Analysts at Debtwire, in an email teasing their Distressed Watchlist for December 2014, identified it as potentially financially unstable. For operators that are the Colorado arm of a larger national or international company, we analyzed the financial statements of the parent company.

Choosing indicators to look at beyond debt
We aren’t the only ones combing through oil and gas company finances. Banks – who finance debt and stand to gain or lose money depending on whether that debt is paid back – are looking too. Loan agreements often contain stipulations, called debt covenants, that companies must meet to demonstrate their financial stability. The requirements are negotiated within the context of the current economic climate, and vary from bank to bank and loan to loan. We gathered data on three measures common in debt covenants:

We also looked at two other metrics that investors often watch:

We gathered these indicators for 2010 through 2013 from the annual financial statements that companies file with the U.S. Securities and Exchange Commission. (If you’re brave enough to dig into the statements yourself, you might find this how-to from the SEC useful). It was a complicated, time-consuming, brain-numbing process that involved digging, wrangling and financial detective work. (But heck, as much as we were cursing our boss for giving us this assignment, we got paid to do it). We checked, double-checked, and sometimes even triple-checked the data. You can view the full results here.

An overview of the ten companies
The ten companies that we investigated and any potential red flags are summarized in the table below. Each indicator has a generally accepted threshold; if the ratio ticks above or below that threshold, potential lenders and investors see a red flag.

Debt burden growing across the board
We began our analysis by looking at how the total debt of each company changed over time. With the exception of Encana, every company reported an increase in debt. Some increases were small, but some were sizable, like in the cases of Linn Energy and Whiting Petroleum. Three of the companies we looked at –  Nighthawk, Synergy and WPX Energy – had no debt in 2010. At the end of 2013, all companies reported some amount of debt.

Get the data: CSV | XLS | Google Sheets | Source and notes: Github
The fact that a company or person takes on debt isn’t necessarily bad news. It could be because the company is expanding, or strategically aiming to take advantage of certain tax benefits. For comparison, if you take out a student loan to get a college degree, or take out a mortgage to buy a house, that could improve your financial stability in the long term. In order to invest in those long-term gains, you need to take on debt in the meantime. The same applies to companies.

Figuring out whether increasing debt is problematic requires a deep understanding of what else is happening in a company. The other indicators we chose – current ratio, debt-equity ratio, interest-coverage ratio, EBITDA and cash flow from operations – serve as a launching point for that deeper analysis. To thoroughly judge the financial health of a company, even more would have to be taken into consideration.

Current ratio raises red flags for several companies
The current ratio measures the ability of a company to pay off its immediate financial obligations. The higher the ratio, the more easily the company can pay. At the end of 2013, two companies, Linn Energy and WPX Energy, had current ratios that were below the red-flag threshold. Three other companies – Whiting Petroleum, Bonanza Creek Energy and PDC Energy – had current ratios less than one at some point between 2010 and 2013 that have since rebounded.

Debt-equity ratio climbing but still in a safe range
The debt-equity ratio measures how leveraged a company is – that is, how much of its financing comes from debt rather than from shareholders. The higher the ratio, the more the company relies on debt to finance its operations. Several companies– Encana, Linn, Bonanza Creek, WPX Energy– had increasing debt-equity ratios over the past few years. None of the debt-equity ratios were alarmingly high, though we will keep an eye on Encana’s.

EBITDA and cash flow from operations
Both of these indicators give insight into the operational performance of a company – in this case, operations are oil and gas production – but in slightly different ways. Investors need to know whether a company is actually generating money from its business, so they look at the size, timing and trends of its cash flow from operations. EBITDA adds another dimension by giving a quick read on profitability: It’s a rough way to evaluate how effective a company’s overall decisions are, including the cash flow piece of the puzzle.

Unlike the other indicators, which are ratios, EBITDA and cash flow from operations are absolute dollar measures that are difficult to compare across companies of different sizes. What is important here is the pattern for each company over time: Is EBITDA going up, going down, or staying steady? Is cash flow positive or negative? In general, a higher debt load is concerning when EBITDA and cash flow are volatile and even more so if they are decreasing.

Some companies – Bonanza Creek, Whiting Petroleum, and Synergy– had steadily increasing EBITDA and cash flow from operations, which is a good sign that their operations are bringing in money. WPX Energy, however, saw its EBITDA drop to a negative value and its cash from operations dip 40 percent.

What we found: Diversity among companies’ financial health
While debt increased across the board for these ten companies, the extent to which that should alarm us varies. Three companies – Noble Energy, Synergy Resources, and Whiting Petroleum – took out more debt but also enjoyed improvements in profitability and cash flow from operations, and are clearly not overburdened by the size of their debt.

Others, however, are in worse shape. PDC Energy and WPX Energy not only increased their debt, but also saw both cash flow from operations and earnings decrease from 2010 to 2013. This means that their debt load is now more burdensome. Furthermore, both companies have alarmingly low interest coverage ratios, which may signal that they’ve maxed out on their ability to access more debt financing. Since it’s too early to see the full effects of the oil price plunge on financial statements, we suspect that these companies were not in great shape even before prices started to slide.

There are two companies – Encana and Linn – for which we’re eagerly awaiting the latest financials, because any negative impact from lower oil prices could potentially tip the scale on their overall health. Linn Energy still has positive cash flow and EBITDA, but they’re walking the line with their debt load. Although Encana was the only company whose debt slightly decreased, its debt-to-equity ratio more than doubled, and its EBITDA decreased by more than half – generally, pretty bad signs.

What’s clear here is that two companies can be moving in the same direction on one indicator, like debt, but in different directions on another. Which means that looking at any one of these indicators in a vacuum doesn’t say much. The indicators we chose in addition to debt certainly help to flesh out the picture; but to make a thorough analysis of how an oil company will weather the oil price plunge, one would need to dig even deeper.

Looking ahead: The full fallout is yet to come
We’ve already seen some fallout from the 2014 oil price slide. One small producer in Texas recently filed for bankruptcy. Layoffs have been announced at companies around the country, which Forbes estimates total at least 15,000 nationwide. While production is still going strong, the wind seems to have been taken out of the sails of the U.S. oil and gas boom. We expect that over the next year or even many years we will continue to see the effects of the 2014 oil price slide on companies: mergers, buyouts and possibly bankruptcies if companies are unable to pay back debt.

Inside Energy is just beginning to peel the oil and gas finances onion – an onion with many, many layers. We plan to keep following these 10 companies as they release financials for 2014 and the first quarter of 2015. What would you like us to investigate next? Leave us a comment below with your suggestions or questions.