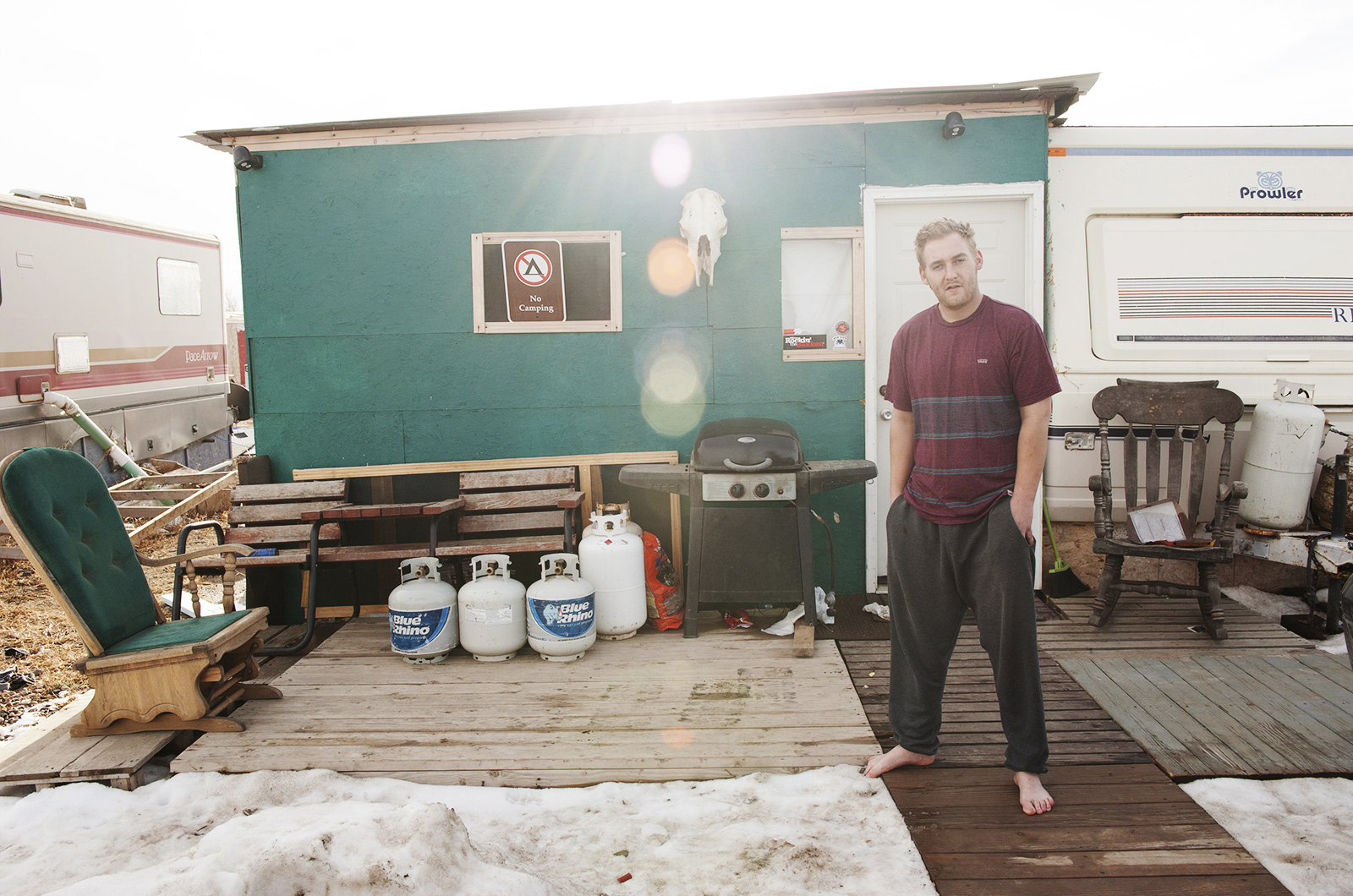 Jimmy Vonk, a roustabout in the Bakken oil field, stands outside his RV and mudroom in Fox Run RV Park in Williston, North Dakota. Vonk's mudroom contains a living room area with a couch, television and video games, and a small bedroom. 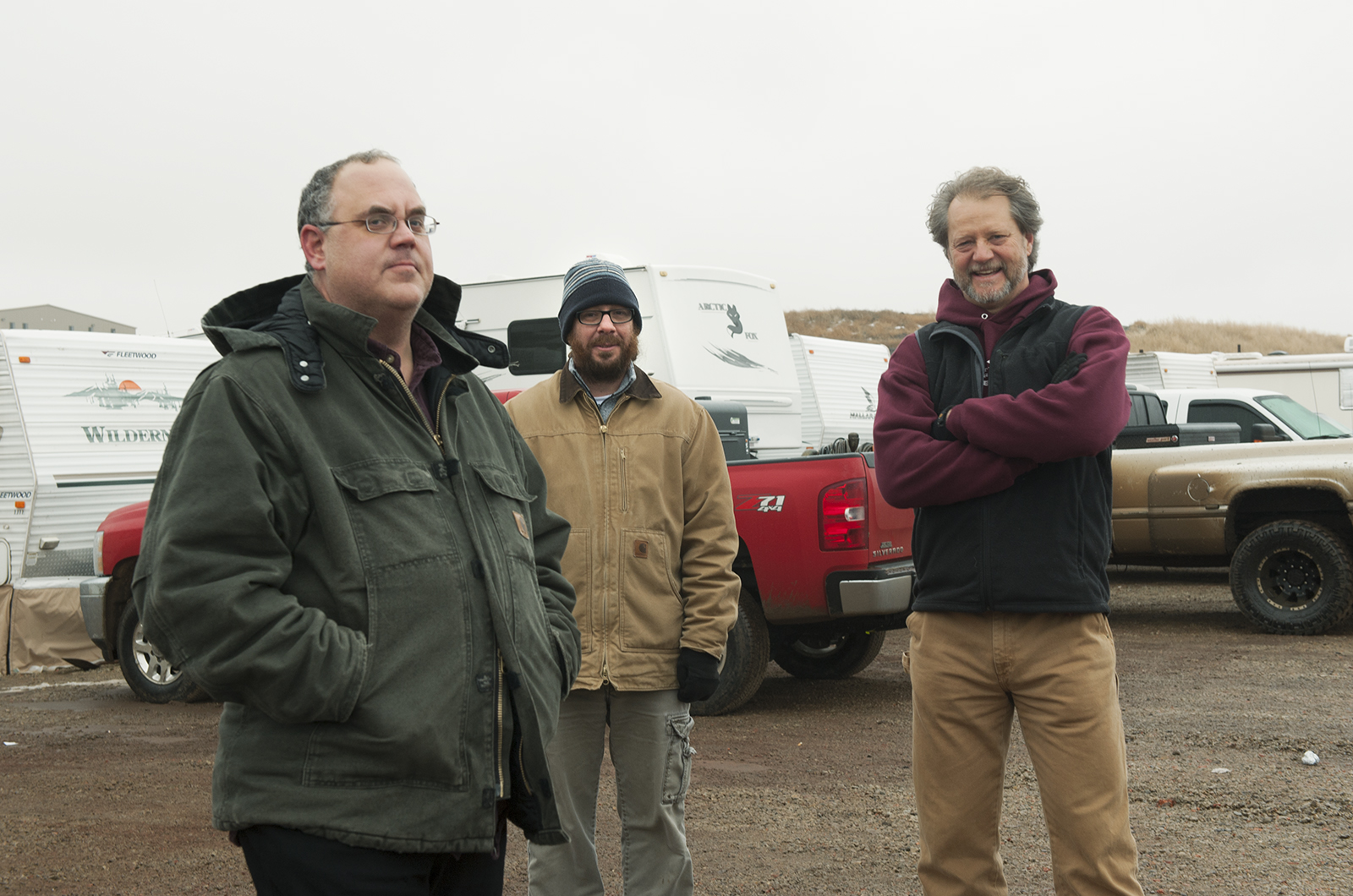 University of North Dakota researchers Bret Webber, right, Bill Caraher, center, and Richard Rothaus travel the Bakken documenting RV parks and other forms of labor housing in the oil patch. The group is particularly interested in how people personalize their space, making structures meant for temporary residency into permanent homes. 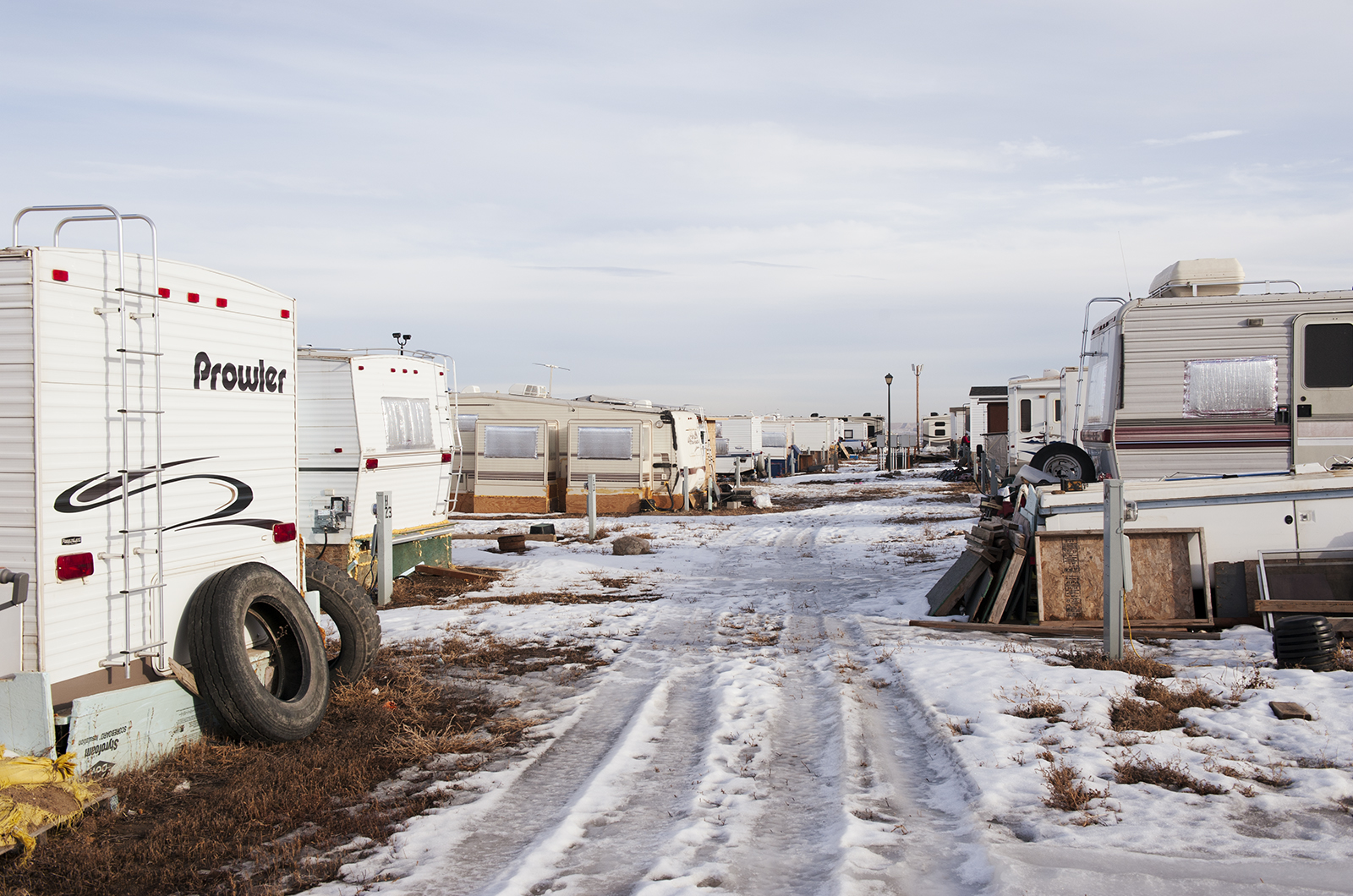 Fox Run RV park in Williston, North Dakota, is home to hundreds of workers brought to the Bakken by its oil boom. RV parks are a cheap option in Williston, where apartment rents can rival Manhattan, but living in one full time requires a lot of work during North Dakota's fierce winters. 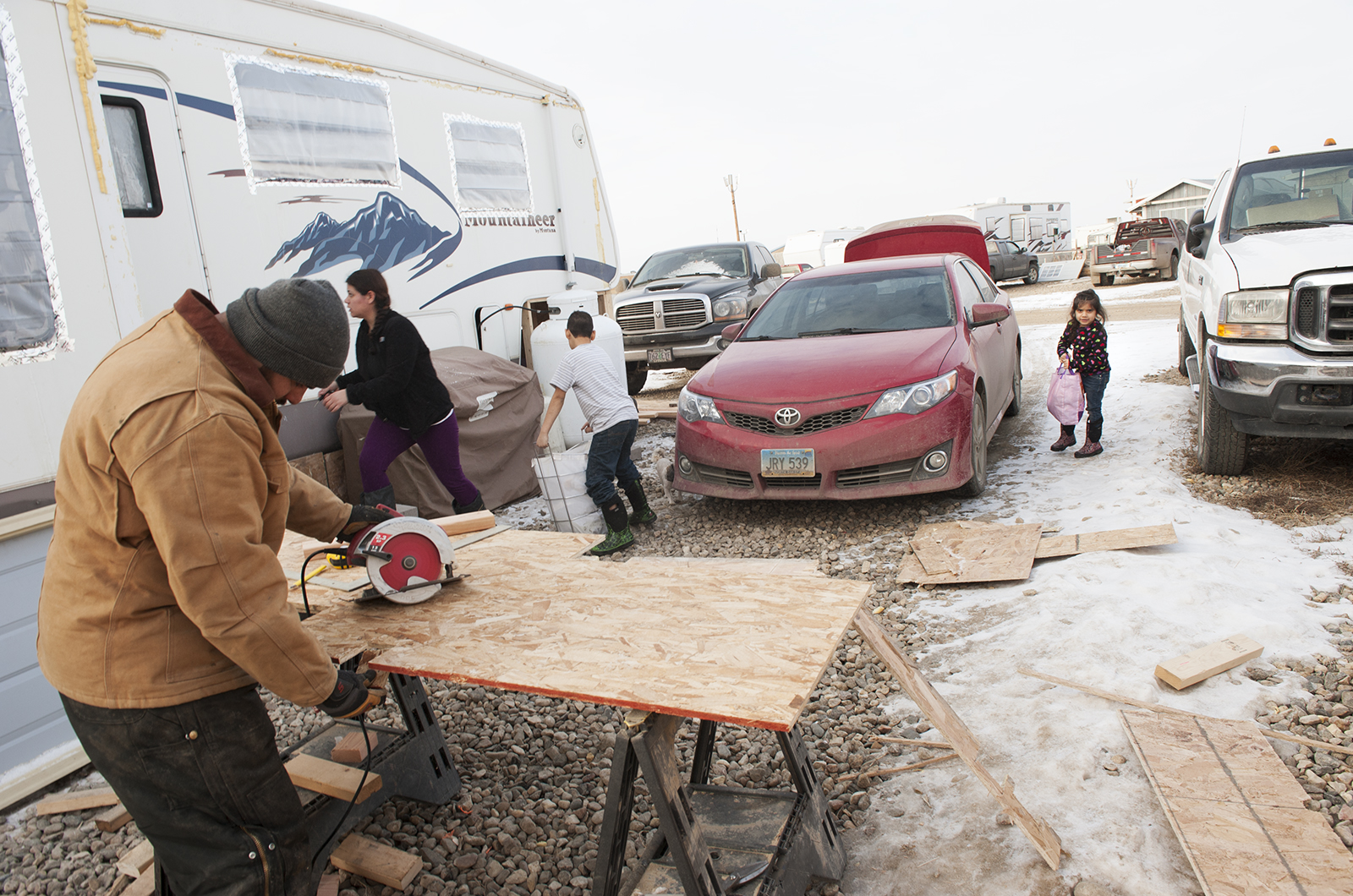 Javier Moran, left, cuts plywood to build a "skirt" surrounding his family's RV while his wife and two children prepare to use the Fox Run RV park's laundry room in Williston, North Dakota. Skirting, often built with plywood and insulated with foam, is key to keeping RVs warm during winter. 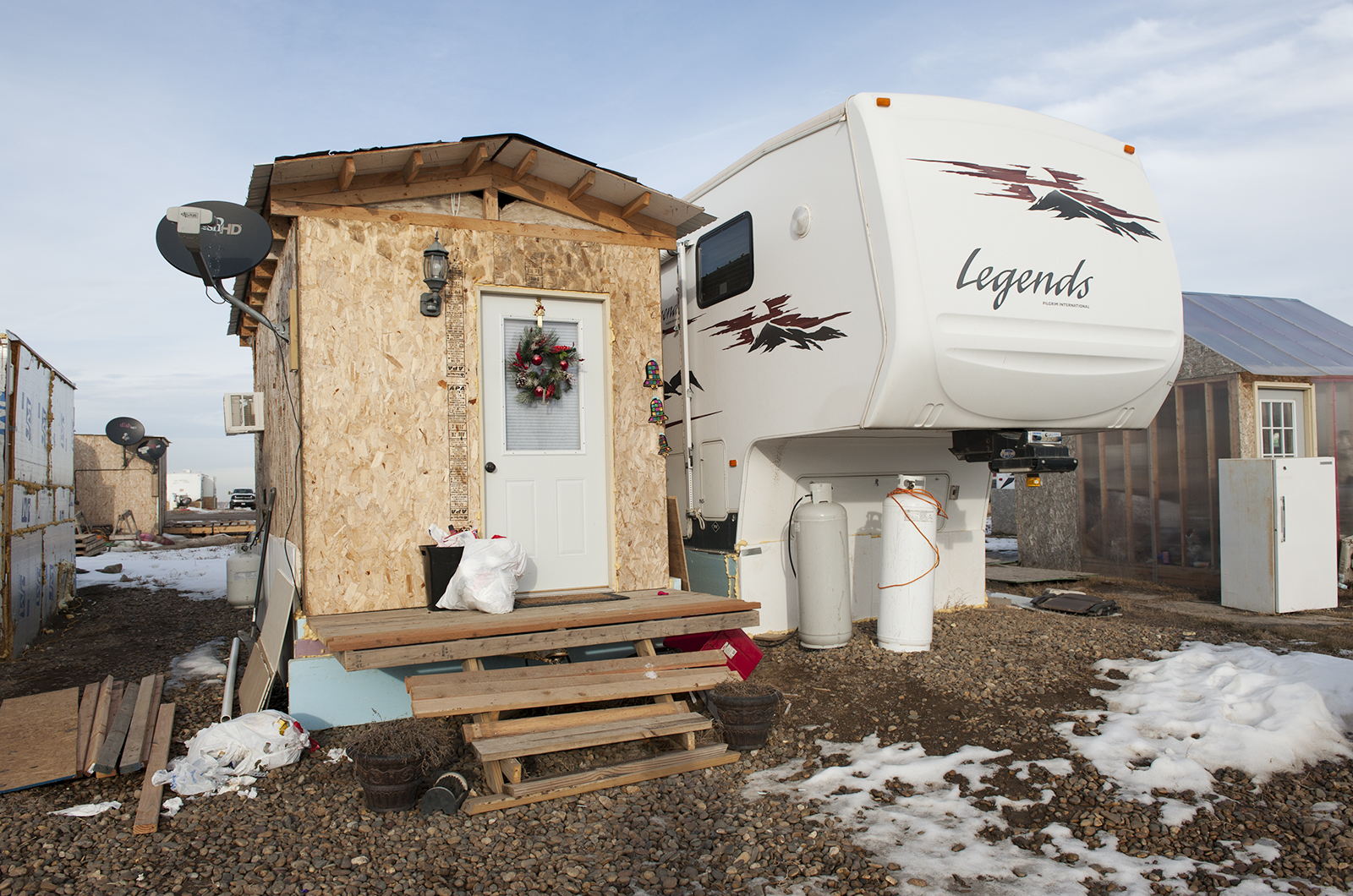 Long term residents in the Bakken's RV parks often build mud rooms like this one in the Fox Run RV Park in Williston, North Dakota. Mud rooms provide extra room for oil field workers to remove and store dirty clothes and equipment. Some people also use them as additions to their living space. 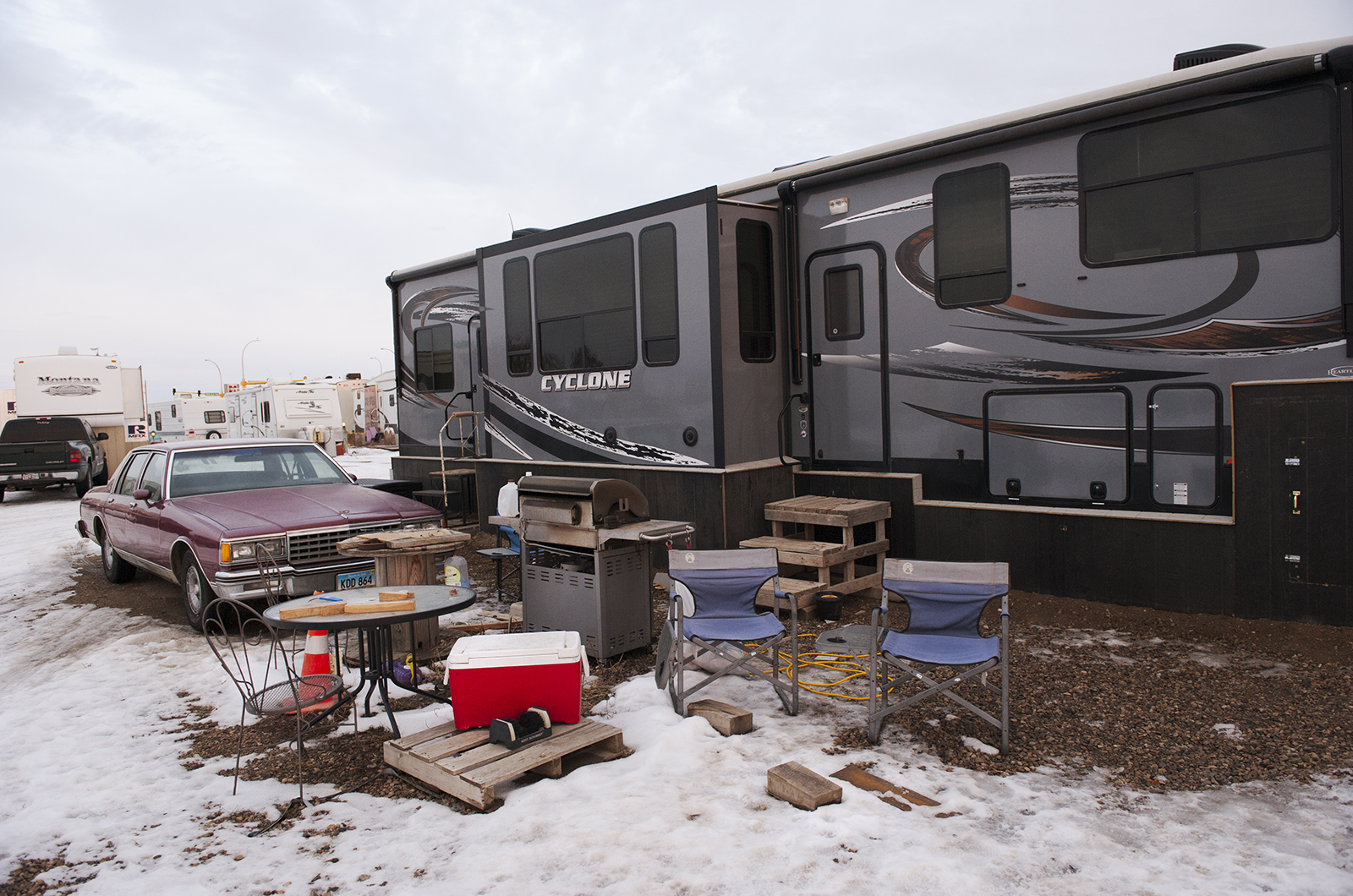 Throughout the Bakken, cooking grills and patio furniture are found outside RVs like this one in Stanley, North Dakota. 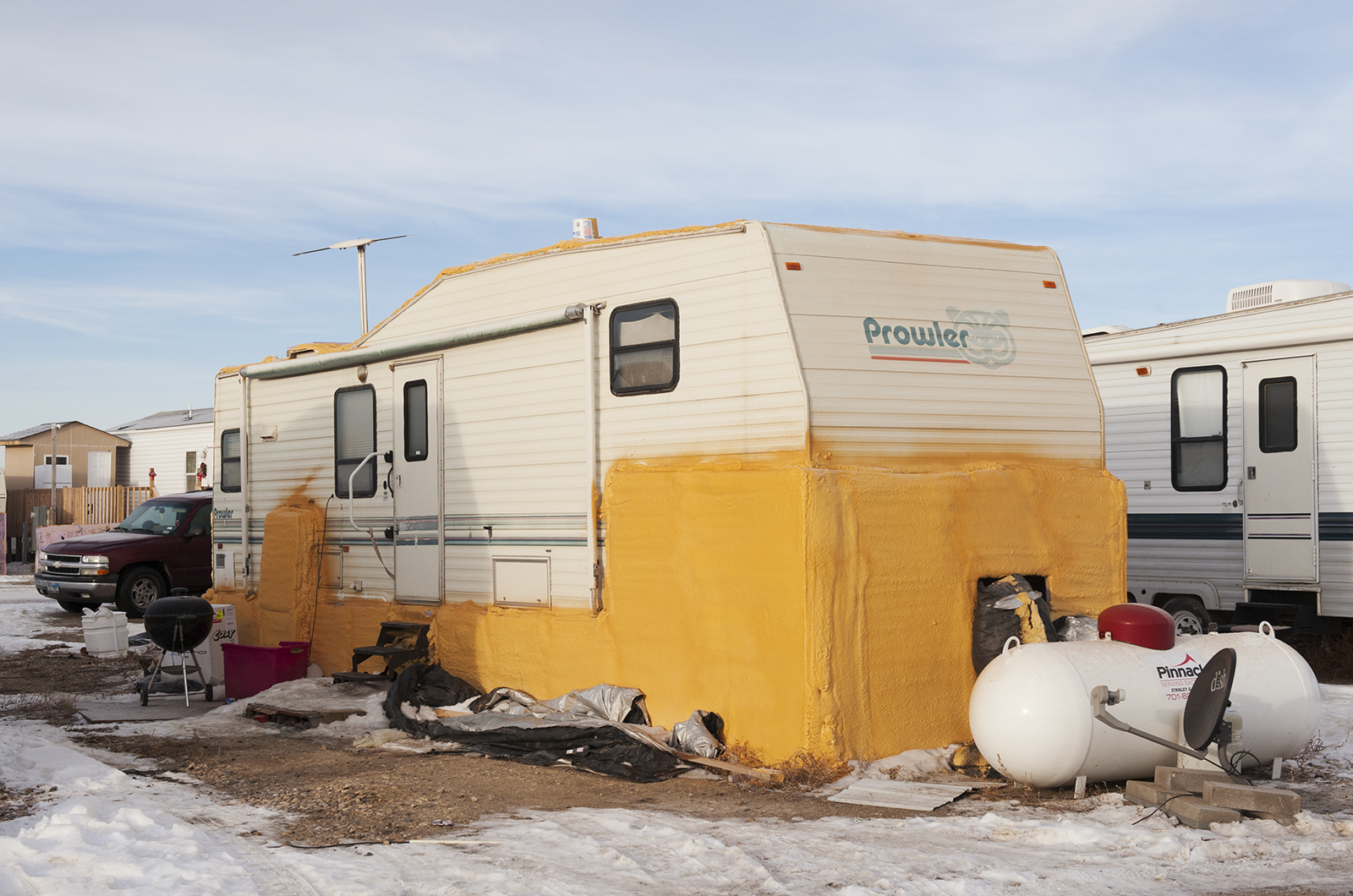 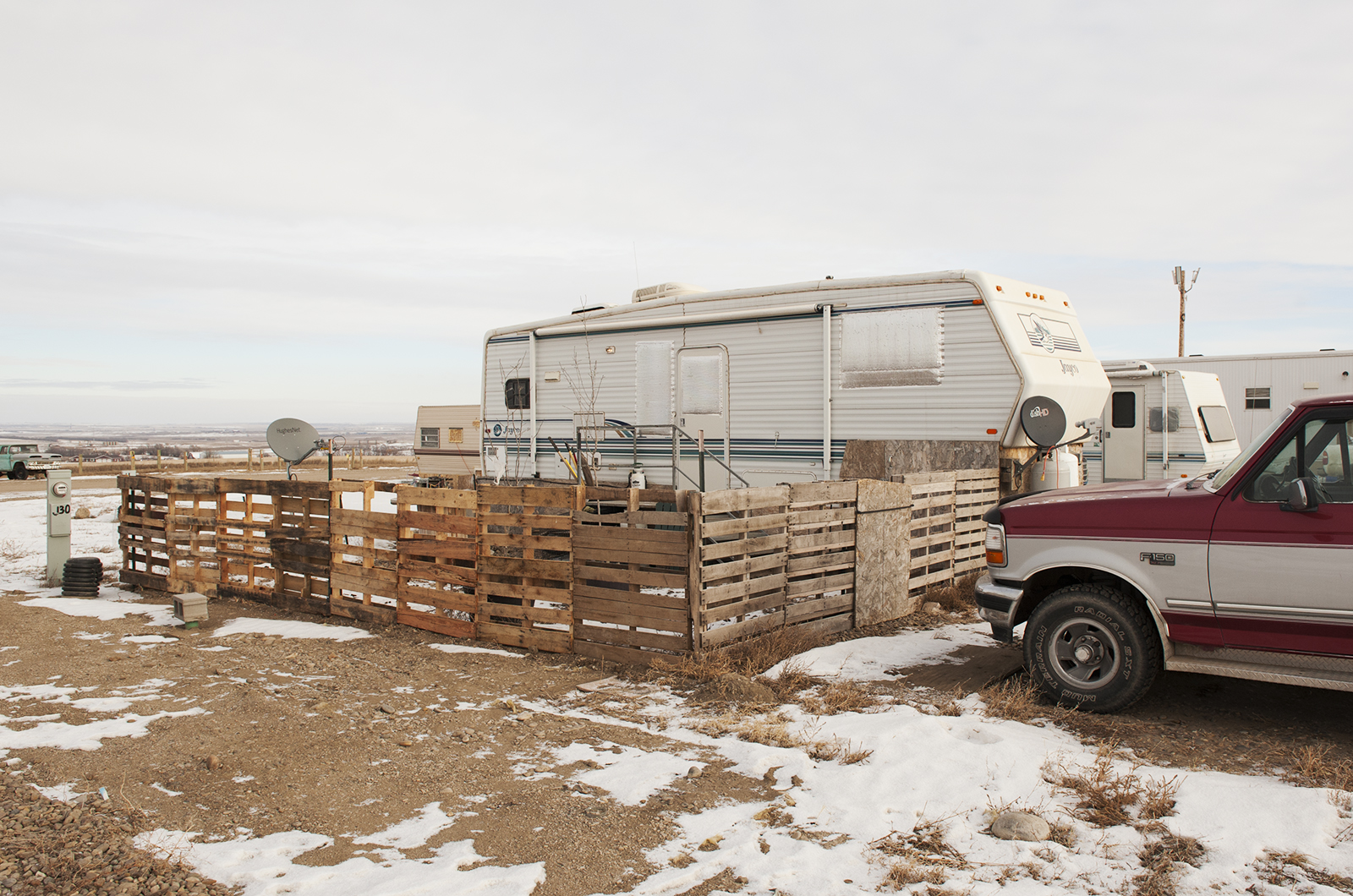 "I'm obsessed with shipping pallets," says University of North Dakota researcher Bill Caraher. The simple wood platforms are often used in the Bakken to create stairs, walkways, and fences like this one in the Fox Run RV Park in Williston, North Dakota. 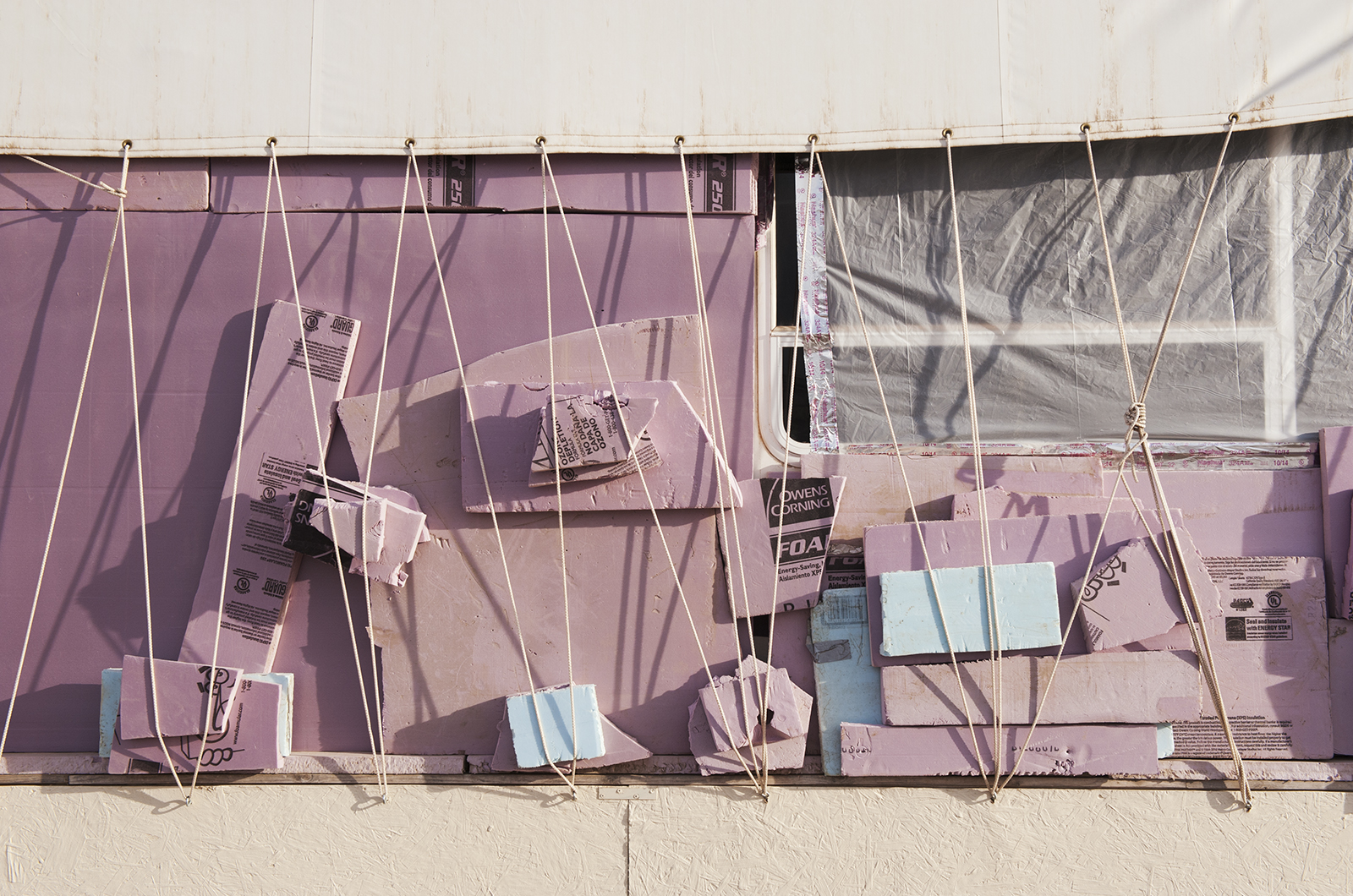 There is no one way to insulate an RV for a North Dakota winter. One owner in the Fox Run RV Park in Williston, North Dakota tied excess chunks of foam to the side of their trailer and covered windows with plastic to help beat the cold. 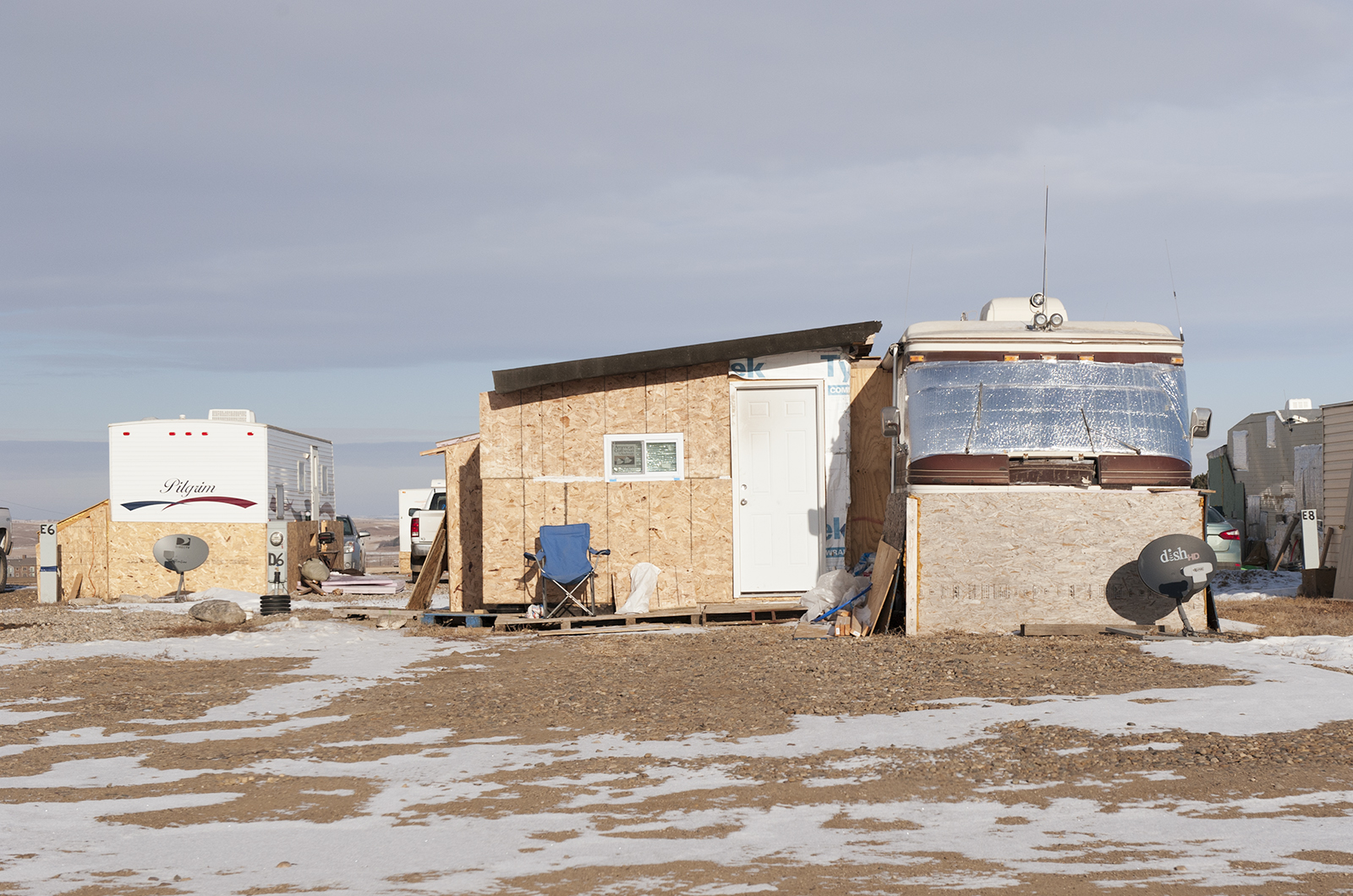 For permanent RV residents in the oil field, space is at a premium. Some enterprising owners build mud rooms that rival the trailers they are attached to in size, like this on at Fox Run RV Park in Williston, North Dakota. 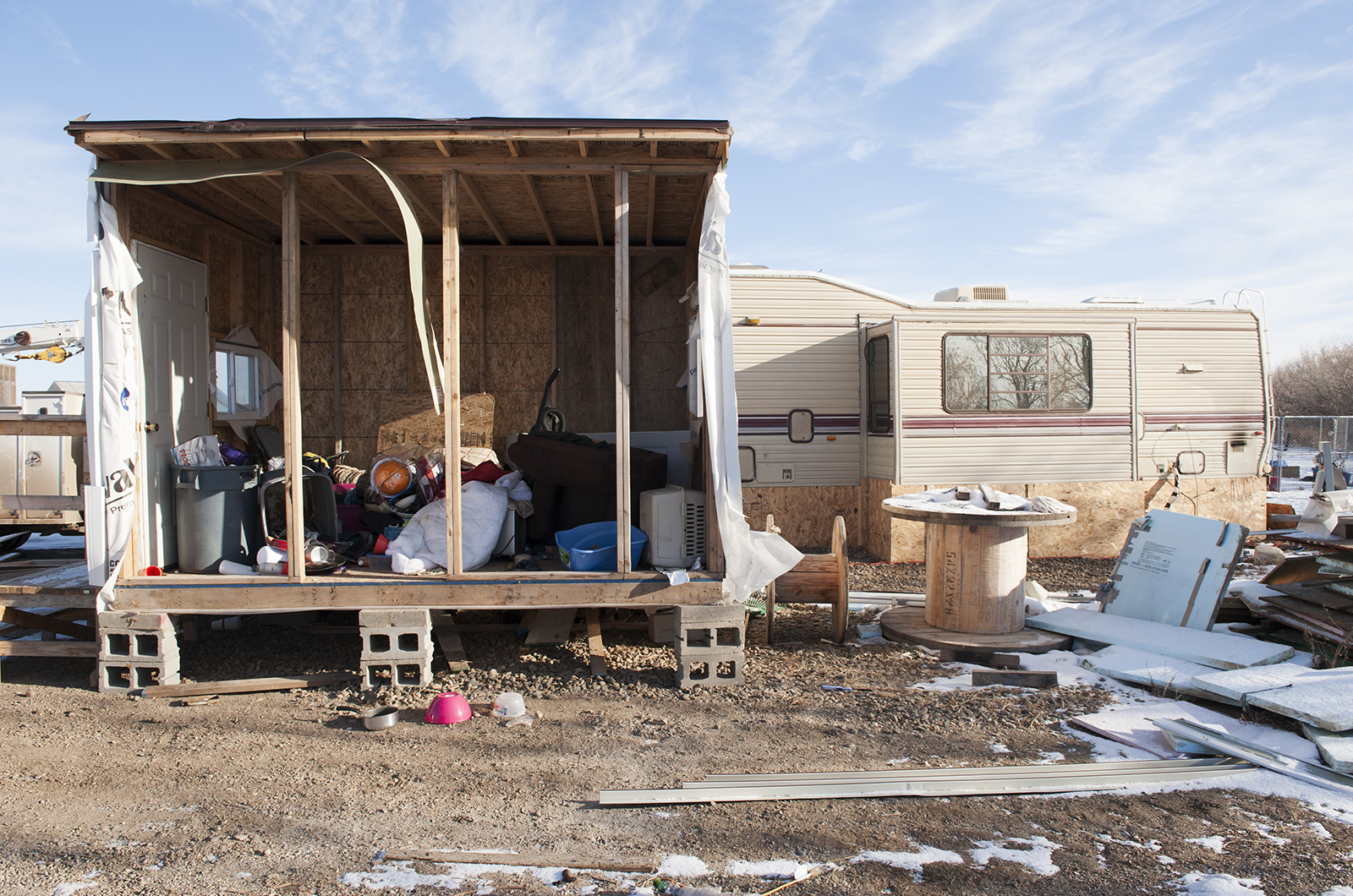 Two researchers from the University of North Dakota, Bill Caraher and Bret Webber, say this housing boom-bust cycle is just part of a long history of settlement on the northern Great Plains. As part of their on-going North Dakota Man Camp Project, they visit dozens of RV parks across the Bakken multiple times a year, interviewing residents and taking note of changes.

In December, I spent three days riding shotgun with them as they did their winter research.

“Ok, this is our favorite RV park in the entire Bakken,” Caraher said, excitedly, as we turned off Highway 85 into Williston Fox Run. The park sits on a windy hillside north of Williston, the town at the center of the Bakken oil boom.

We drive through rows of RVs with elaborate enclosed porches, or “mudrooms,” garden gnomes, yard sculptures and dog runs. Caraher and Webber reminisce about a man cave someone had built onto the side of an RV that was here last time:

“It had heat, it had full electrical, they had a big flat screen TV in it, it was spectacular.”

What they love is residents’ innovations. They’ve transformed these campers meant to be used by families for two weeks each summer into year-round oilfield housing. We pass a trailer surrounded by a fence made of scrap wood and Caraher blurts out, “I’m obsessed with shipping pallets.”

But on their early trips to the Bakken they weren’t so impressed. They were actually somewhat horrified by the living conditions in some of the parks. To show me what he means, Bret Webber walks me to an alley between two rows of RVs and points at the dog turds, exposed wires and garbage strewn about the dirty snow:

“My first reaction was: people should not be having to live like this. Especially because there’s a lot of money being generated by the activities that these folks are being involved in, and yet look at the quality of living.”

But as Webber spent more time in the man camps, his perspective changed. First, he realized this temporary housing made a lot of sense for the oilfield workers like Kevin Andrews. He and his wife Dee Dee moved from Oregon to live in the North Dakota Indoor RV Park, an oversized storage unit with RVs behind each bay door. Living here saves them a lot of money, and they don’t have to make permanent investments in a place they don’t intend to stay.

“We’re saving up for a nice piece of property with trees and a river and once that’s paid off we’ll go home,” Kevin Andrews said.

Webber’s second realization was that building lots of permanent housing can be too much of a gamble for oil patch communities. So, when one town, Watford City, started investing in a lot of housing and apartments a few years into the oil boom — something he initially thought all towns should do — Webber worried.

“My first reaction was: I hope they’re doing the right thing here because this is a risky investment.”

Towns that over-build when times are good can get stuck with the bill in a downturn. It’s called the “too much mistake,” a term coined by North Dakota historian Elwyn Robinson way back in the 1950’s. That cycle of fluctuating population and housing needs, the researchers say, is not unique to this oil boom. It’s also a part of the area’s original industry: agriculture.

Like many Great Plains states, North Dakota’s economy has always been one that exports raw materials, from wheat to cattle to oil. All three are dependent on outside markets, markets that, as Webber said, “are constantly experiencing price fluctuations over which the local farmers or oil workers have absolutely no control.”

Early homesteaders left during drought, or when commodity prices dropped. This northern prairie is littered with empty, weathered farmhouses, abandoned by owners who left for better opportunities elsewhere. Oil workers do the same, as we’re starting to see with prices dropping. The difference? When the oil workers move on, they take their mobile homes with them, leaving nothing behind.