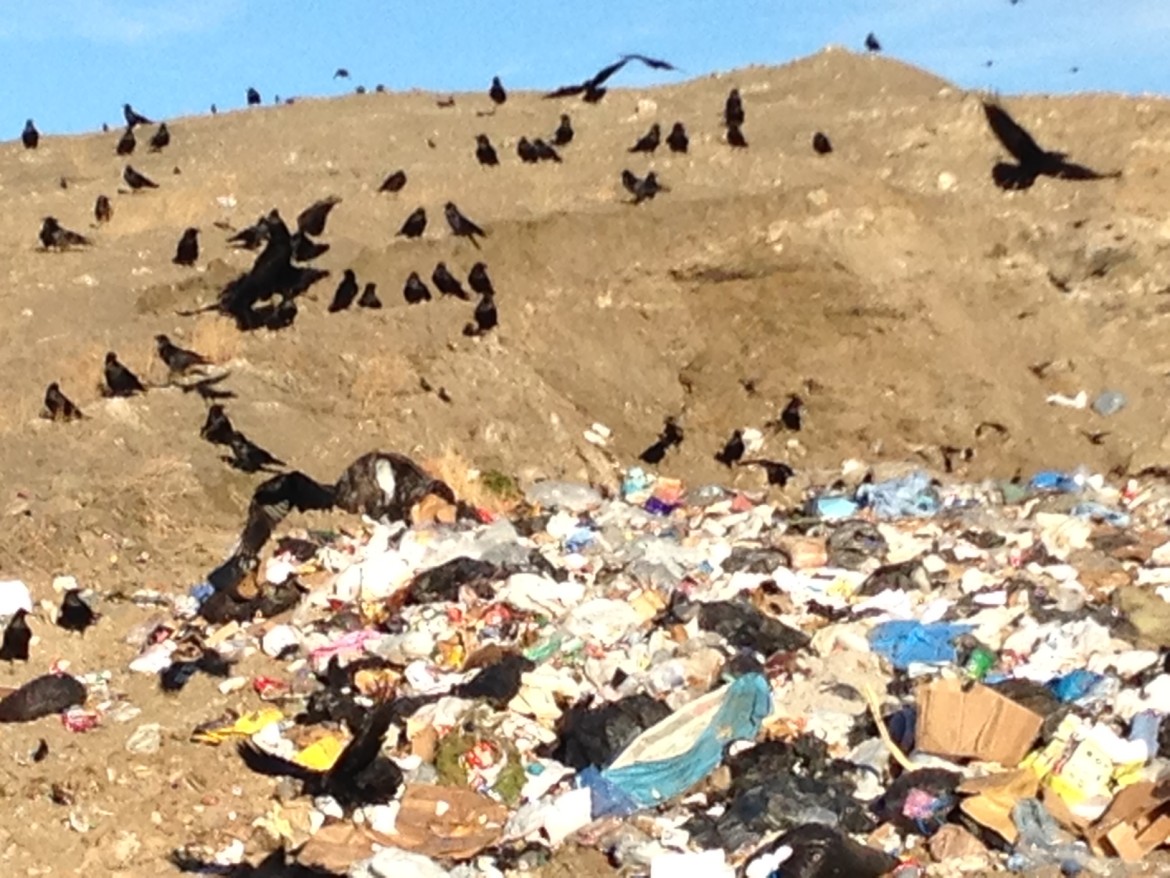 When you think of a raven, you might think of Edgar Allen Poe.

But those “ominous birds of yore” have moved in across the West following energy development, and several new studies show ravens are feasting on the eggs of another iconic bird — sage grouse — further threatening a species on the brink of extinction. Now, the U.S. Fish and Wildlife Service wants to control more ravens, lethally.

One of the best places to go raven watching is, strangely enough, a  landfill, explained wildlife ecologist Dr. Charles Preston. Why?  It’s what these scientists call a disturbed landscape, a dump in the middle of the wild sagebrush.

“Ravens are one of the few species that we know will communicate with one another about a distant activity,” Preston said.

That kind of communication is called displacement. It happens when ravens gather at night and pass along information about where to find the best food–like little old ladies swapping coupons. Then the following day they show up by the dozens at a fresh roadkill carcass. He says it is this intelligence that makes ravens formidable predators to sage grouse.

Jonathan Dinkins is a researcher with the University of Wyoming working on a 4-year study of ravens and their effects on sage grouse nests.  “There are raven hot spots,” he said. Other studies in Nevada and Idaho agree with his own: Raven populations aren’t out of control everywhere, just in areas where humans have disturbed sagebrush habitat.

“So you could have oil and gas structures come in and sage grouse are avoiding those,” Dinkins saID. “But then you also have a higher density of ravens in those areas. And so you may have a larger area of avoidance by sage grouse.”

In other words, ravens and oilfields often are a one-two punch for sage grouse. Dinkins’ study and others all seem to show that more ravens mean fewer sage grouse are hatching. But Dinkins said you can’t necessarily assume raven hot spots are just around energy development.

“Interestingly, during our study, over half of our study sites that we had that had high raven abundance, they were not in oilfields.”

But the kind of sprawl and traffic and roadkill that come as part of the oilfield package does mean more ravens. Wyoming recently decided to change its rules about killing ravens. In the past, because ravens are protected as migratory birds, they could only be killed to protect livestock or human health. But in coming months, U.S. Fish and Wildlife will be able to use poison control on ravens to benefit a sage grouse. But Dinkins said, ideally, only in those areas where raven hot spots overlap with the best sage grouse habitat.

“We surmise that,” he said, “but we don’t have hard data to say that the control of ravens results in more sage grouse.”

And, he said, killing ravens would only be a temporary fix because ravens are territorial. An empty roost is like an empty hotel room at Cheyenne Frontier Days–it fills up instantly.

And that’s why ecologist Charles Preston says a campaign to kill ravens could be an uphill battle. The best way to control ravens, he said, is to bring sagebrush country back into balance: cluster energy structures in limited areas, close down dumps in sage grouse habitat, and help raven predators thrive.

Who likes to eat ravens? Golden eagles do, and so do weasels, coyotes, owls…