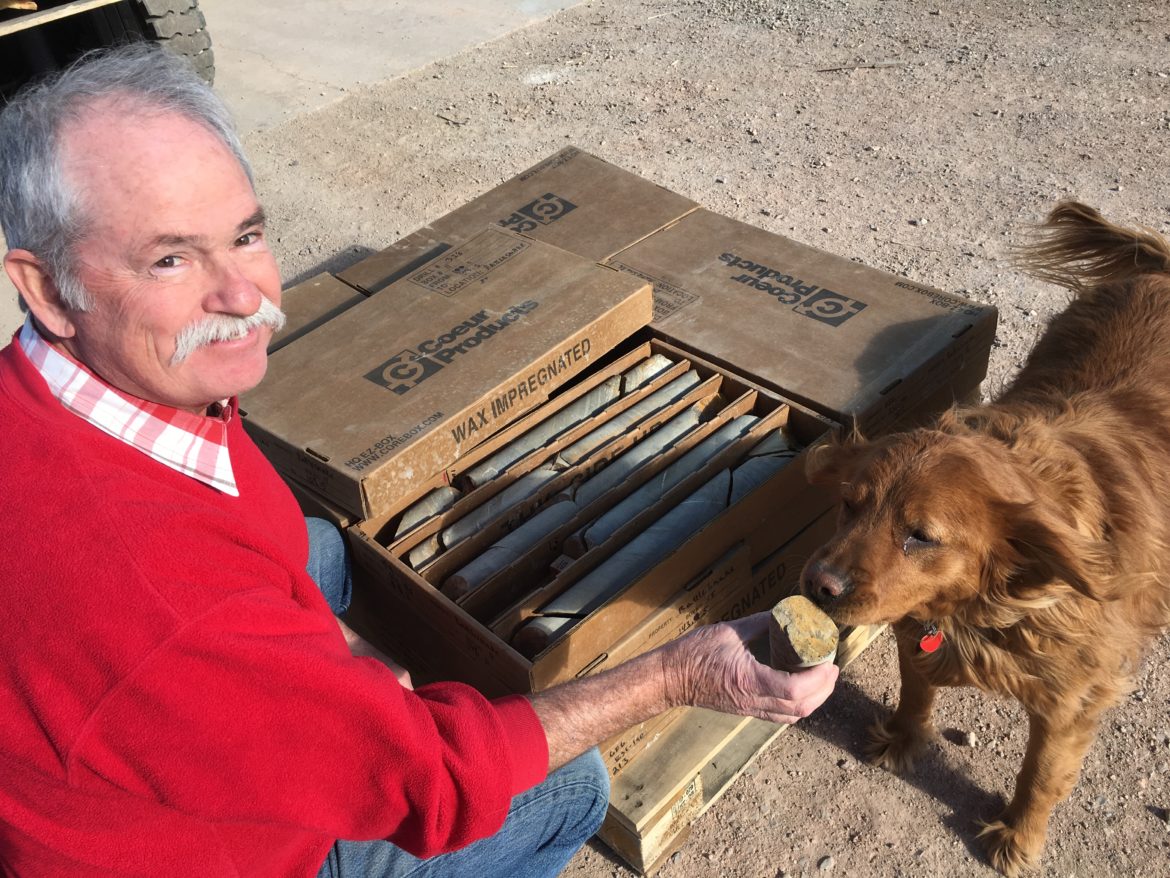 On an overcast day, an old golden retriever named Ruby walks around the edge of a warehouse in Casper. She’s stops and looks out, standing in the square light where a truck might pull in. Behind her is a large room stacked high with boxes full of rock, some of which have gold inside.

This warehouse is home to GFG (Go For Gold) Resources, a Canadian company that set up camp in Casper back in 2015. They explore and drill for gold out in the Rattlesnake Hills  – a unique geologic region in the center of Wyoming. The company’s project area is 33,500 acres.

Tim Brown, vice president of exploration for GFG Resources, said the company is looking to expand the underground zones where traces of gold have already been found. But certain times of year, the company isn’t able to work out there at all. “Probably 90 or 95 percent of that is limited by the sage grouse restrictions. What that means is we can’t do any mechanized activity out there from March 15 to June 30th,” he said.

That restricted time period is mating and egg-laying season for sage grouse. Brown and others at GFG Resources were happy to see the Department of Interior announce upcoming changes to the 2015 sage grouse management plans. The federal agency began that process last month saying they would look at amending some or all of the land-use plans. Brown knows what he would want with an amendment.

“The part that would be nice to see changed is if [our operations] window were expanded.” He said, “We want to get as much done in the summertime as we can. And if we can have some relief there, well that would be a big help.” As changes approach for the 2015 sage grouse management plans, some businesses, like GFG resources are hopeful  – while others are worried it could unravel a decade of negotiation and compromise.  Once numbered in the millions, the rangeland bird’s populations have dropped to below 500,000 due to many factors including oil and gas development, improper grazing and intrusive structures like fences and power lines. The management plans were seen by many as a huge accomplishment for collaboration and compromise while also maintaining state power. It was a way to keep sage grouse from being listed as endangered.

Interior Department Secretary Ryan Zinke said he hopes to improve the plan and place a higher priority on economic growth over conservation. This falls in line with a directive issued by President Donald Trump last March, formally prioritizing energy development. Since then, conservation groups across the country have denounced the secretary’s actions as undermining years of collaboration. Those groups include the Sierra Club, Center for Biological Diversity, and the Audubon Society, among others.

But it’s not just environmentalists who are resisting these changes. Governor Matt Mead and Colorado Governor John Hickenlooper have repeatedly said wholesale changes would threaten the integrity of the plans.

One industry happy to see the plan re-opening is oil and gas. Under current plans, drilling is restricted in priority areas for sage grouse and limited in others.

Diemer True, chairman of Diamond Oil and Gas, has worked as a member of Wyoming’s Sage Grouse Implementation Team briefly. But even after that work, he’s glad to see changes. He said there are too many inconsistencies between state and federal rules and that’s slowed down companies’ drilling activities.

“If they can bring the regional management plans into conformity with the Wyoming state executive order, that will bring certainty to the industry and that would be very helpful,” True said.

He added that’s important because a strong energy industry helps pay the state’s taxes  – still, he would not be interested in a plan overhaul.

Jim Magagna, executive vice president of the Wyoming Stock Growers Association, is another person who wants to see some amendments made. The association is an advocacy group for the livestock industry. Magagna said, left as is, the plans have a high potential to destabilize the ranching industry. He pointed to the permitting process. Soon, he said, sage grouse considerations will hold too much weight over a rancher’s ability to permit on public lands.

“Grazing, like all uses of our public lands, needs to be based on a balance and looking at a wide variety of factors, not strictly on the needs of one individual species,” Magagna said.

Magagna, like True, said he doesn’t want to see the DOI throw out the plans either.

“We think they have a role that they can play if they’re properly structured, but they simply went overboard,” he said.

Many seem to agree that an overhaul of the sage grouse management plans would not benefit anyone. But some also see risk in making any changes.

Tom Christiansen, sage grouse program coordinator for the Wyoming Game and Fish Department, said, “The idea of re-opening, it’s somewhat akin to ripping a band-aid off of a wound. The potential there is for an infection.”

Christiansen has been involved in sage grouse management since the beginning, back in 2000. When he first started, the bird was close to extinction and he’s seen the efforts working and sage grouse start to come back. In the end, Christiansen just hopes any amendments won’t remove the fangs from the plans since they have helped the bird.

“If the door gets completely opened to wholesale development on the scale that has been shown by science not to be sustainable for sage grouse, well that’s not going to be a good thing. And could potentially down the road lead to a listing, which is not in anyone’s best interest,” he said.

There’s a public comment period open until Nov. 27. With no concrete changes yet announced, the Interior Department added they’re open to large, small, or no changes to the sage grouse plans. The full text of Secretary Zinke’s Notice of Intent filed last month in the Federal Register can be here.