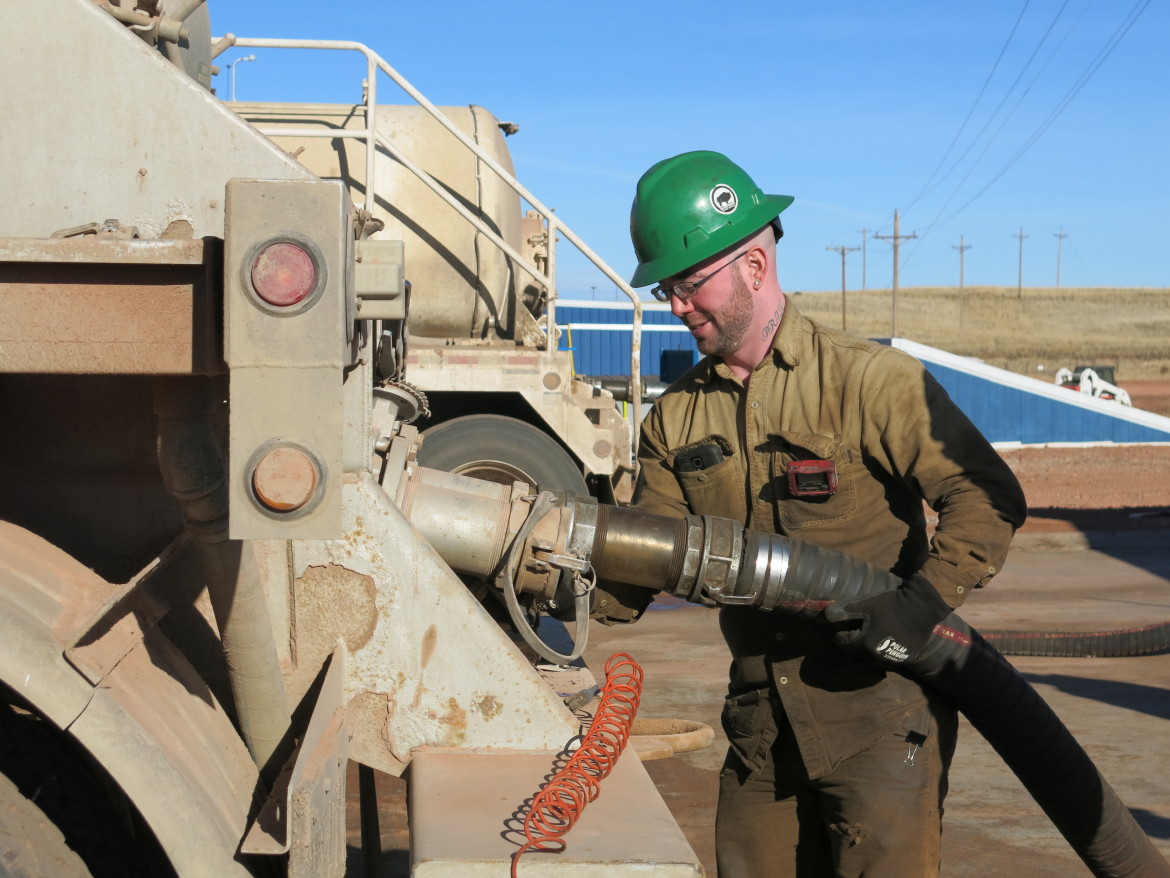 A Black Bison employee unloads produced water that will be filtered, pressurized, and injected deep underground.

With oil prices in free fall, there’s a lot of uncertainty in the oil and gas industry. Produced water, however — the super salty, sometimes chemical-laden fluid that comes up after a well is drilled — is almost a sure thing. Because the older a well gets, the more water comes up with oil. Justin Haigler, President of Black Bison, Wyoming’s largest water services company told me, “Without this water management, oil and gas doesn’t happen.” An injection wellhead, like the one under the hut on the right, is only a few feet tall. For those reasons, a Colorado-based oil and gas company called T-Rex Oil believes now is the perfect time to get into the business of wastewater disposal. With oil and gas companies idling rigs and laying off employees, Marty Gottlob, the company’s geologist, says assets are cheap right now. “It’s like the stock market,” he said. “Buy low, sell high.”

T-Rex is looking to operate a wastewater disposal well in Western Nebraska. But the company may face an uphill battle to get the required permit. Last week, Bill Kelly of NET News Nebraska reported that T-Rex is facing strong opposition from residents. According to the company’s application, the proposed project would be the largest operation of its type in the state, accepting upwards of 80 truckloads a day of wastewater from Colorado, Wyoming and possibly Nebraska. The brine would then be processed on site before being pumped underground. Underground injection is a really common way to get rid of oil and gas wastewater. According to the Environmental Protection Agency, there are around 144,000 of these wells spread across the country. Most of them are actually aging oil wells that companies inject with carbon dioxide or other substances to get them to produce more oil, a process known as enhanced oil recovery. Other wells are used to store fossil fuels and about 20 percent are used to dispose of produced water.

It’s this last kind that worries residents of Nebraska’s panhandle, who have concerns about spills, groundwater contamination, and an increased risk of earthquakes. “I just have reasonable doubts about the safety,” said Jane Grove, whose ranch sits near the well site.

There is also the possible link to earthquakes. Inside Energy’s Dan Boyce reported that residents in and around Greeley, Colorado have concerns about unusual seismic activity near injection wells. Wyoming Public Radio’s Stephanie Joyce reported that in recent years, scientists from Ohio to Oklahoma have linked increases in earthquakes to oil and gas activities. Wyoming’s State Geologist, however, published a study last year that showed no connection between injection wells and earthquakes in the state. James Schaffner is VP of field operations at Black Bison.

To many they are invisible, but injection wells, for now, are vital to the industry because they are the cheapest and most available way to dispose of oil and gas wastewater.