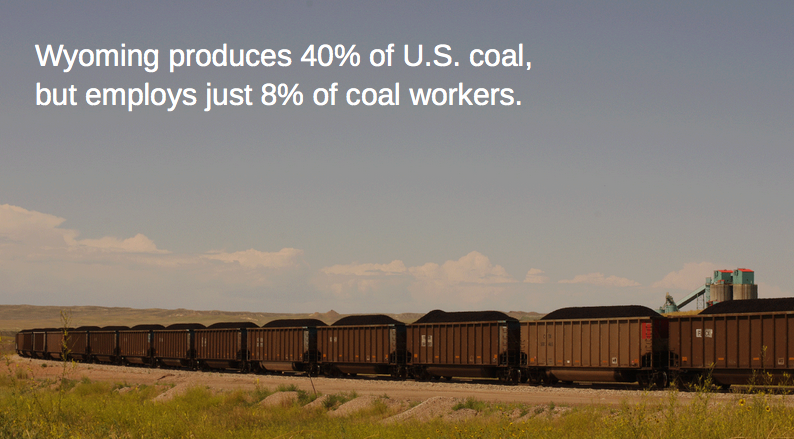 When I think about coal mines, the West Virginia of one my favorite films, October Sky, fills my mental imagery. I picture miners in a small Appalachian town, disappearing underground at the start of every shift, wearing hard hats with large halogen lights, coal dust permanently settled into their cuticles.

This pop-culture image of American coal mining – in addition to October Sky, there’s also Zoolander, Coal Miner’s Daughter and, recently, The Hunger Games – did, and still does, exist. But America’s top coal-producing state isn’t in Appalachia. It is halfway across the country in the Mountain West: Wyoming.

There may be a reason that, even though Wyoming has been the top coal-producing state since 1988 and its coal culture runs deep, the image of the Appalachian coal miner persists. Why? Perhaps because most coal miners still work in Appalachia, even though most coal comes from Wyoming. In 2012, for example, Wyoming produced about 40% of U.S. coal but employed only 8% of coal miners, based on data from the Energy Information Administration.

So why, exactly, does Wyoming’s coal industry employ so few people?

The main reason is geology. Wyoming’s coal comes from the Powder River Basin, a large bowl of thick coal deposits that sit close to the surface. Instead of underground mines, common in Appalachia, most of Wyoming’s mines are large, open pits. Miners use heavy machinery to scrape off dirt, scoop out coal, and load it onto trucks the size of houses. Although mining throughout the country became more mechanized and more efficient during the 20th century, Appalachian mines still require more workers than Wyoming’s surface mines.

Jessica Smith grew up in Wyoming and worked in coal mines near Gillette during summer breaks in college. “Whenever I would tell someone,” Smith said, “that I had worked in the coal industry, they would make jokes about pick axes.” In reality, she drove a giant haul truck. The disconnect between her experiences and the image in people’s minds led her to study the anthropology of coal mining. She is now an assistant professor at Colorado School of Mines.

Wyoming dwarfs the other top coal producing states when it comes to coal produced per worker, but in the past 10 years that figure has been dropping because the easiest coal has already been mined. Wyoming’s coal industry has become more labor intensive over the past decade. This trend is true in other top coal-producing states. Illinois, where long wall mining techniques have increased productivity, is the exception .

Robert Godby, who directs the Center for Energy Economics and Public Policy at the University of Wyoming, put it this way: “There’s an old [golfing related] joke that all you needed in the Powder River Basin was a 3-iron to mine coal. That might be up to a 9-iron now, but you don’t even need a shovel.”

That’s an exaggeration, of course, but he’s getting at the concept of overburden, the rock and dirt comes out of the ground along with the coal. Even though parts of the Powder River Basin were notorious for coal you could pick up right off the ground, coal miners have always had to remove this overburden. Wyoming miners often quip that, “they are in the business of moving dirt,” said Jessica Smith.

But after several decades of removing the coal deposits closest to the surface, Wyoming mines now have to go deeper. And that means digging through even more dirt. So a Wyoming coal miner today, working the same hours as a miner 10 or 15 years ago, digging up the same tonnage of earth – perhaps even more as technology and tools improve – is now mining more overburden and less coal.

The growing weight of overburden, Godby noted, “has undermined some of Wyoming’s national cost advantage.” As Wyoming coal becomes more labor-intensive, its massive drag lines, trucks, and machinery are still a long way from the October Sky image of coal mining. While the overburden-to-coal ratio will only continue to increase, as Godby outlined in a report on the future of Wyoming’s coal economy, regulations such as the Clean Power Plan may have an even bigger impact on the future of Wyoming coal.