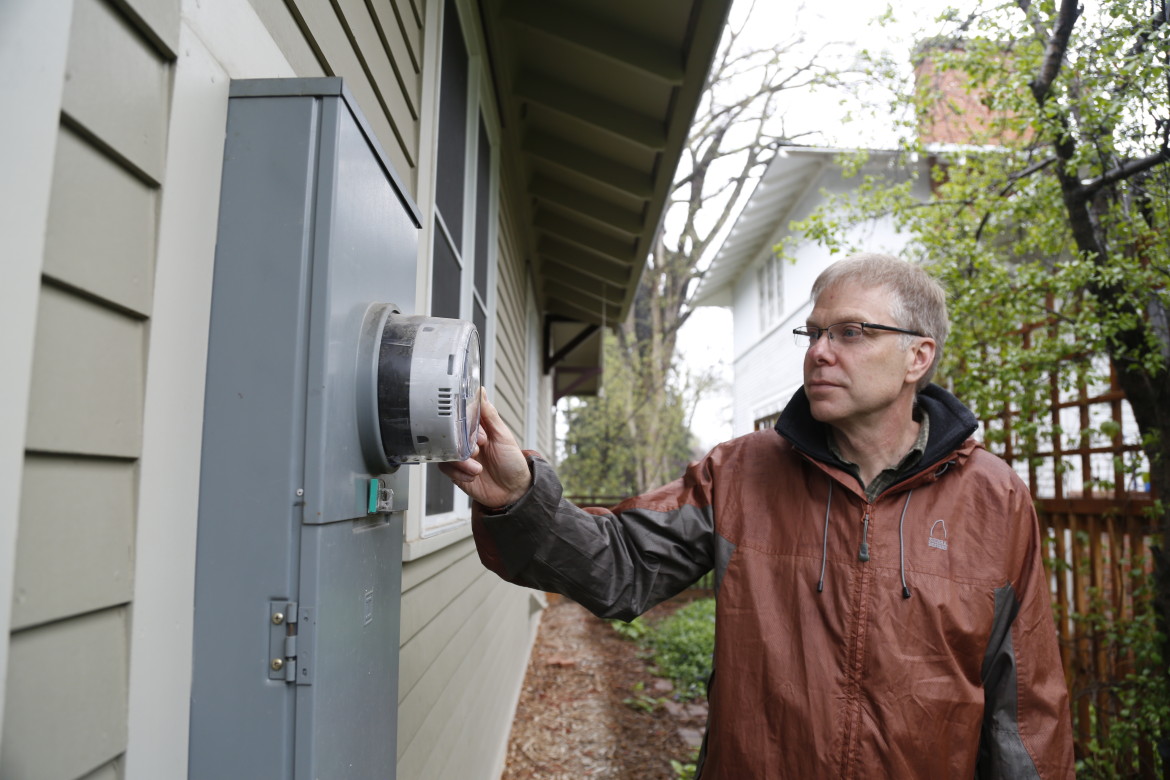 Part 5 of an Inside Energy series Blackout: Reinventing The Grid

Cara Neth and her husband, Torger Hougan, have accomplished something unthinkable: they’ve brought the temperature in their Fort Collins, Colorado home up to 68 degrees. Even a few months ago, they would struggle to get the thermostat up to 50 or 60 degrees.

The pair was huddling under blankets, wearing coats and hats indoors, all while faulty ducts were pumping heat out into the dirt around their home.

Now, a more than $13,000 heating system upgrade hides beneath a trap door in their closet floor.

Cara and Torger’s heating upgrade is a piece of what makes Fort Collins’ small, city government-run utility a model for the potential utility of the future.

To back up, the first piece of this model is attached to the side of residents’ homes throughout the city: basic gray boxes holding nearly 70,000 smart meters. A grant from the Federal Recovery Act helped pay for this $36 million effort about three years ago.

Now, both customers and the utility can see their energy use in 15-minute increments. Before this they could only see energy use once a month.

Yet, that paradigm shift–it hasn’t really happened yet in most places.

But the data these smart meters supply provides a foundation Fort Collins needs. Local elected leaders set a goal for the city to be carbon neutral by 2050. Right now, the utility gets the vast majority of its power from coal, so that’s an ambitious target.

Fort Collins needs two more things to accomplish its climate goals: Residents need to use less energy, and the city needs to get that energy from many more places — from community solar gardens, rooftop solar, and wind power.

All of that will inevitably change the relationship people have with their utility. Under the current model, they bring us electricity and we pay for it. Sumner said in the future, the utility will be able to tailor the delivery.

“Customers can decide their own package that they want,” Sumner said.

Customers will buy and sell electricity on the grid, zapping energy back and forth from their solar panels, or stored in their electric cars.

“They (the utilities) provide the hardware that hosts the platform, but they also curate the vendors,” he said.

Fort Collins needs those vendors and that marketplace to develop. The only way the city will keep its energy transition affordable is if the citizens buy into renewables and, more importantly, make their homes as energy efficient as possible. Cara and Torger  had been shivering in their drafty mess of a house for more than a decade. But, Torger was undergoing treatment for Leukemia. $13,000 for a new heating system was just not possible.

“Under other conditions we might have had that money in the bank, but we didn’t at this point. We couldn’t have gotten it done without the city’s help,” Cara Neth said.

Customers can borrow from Fort Collins Utilities to pay for energy efficiency or renewable projects — loans at a good interest rate. Cara and Torger make payments right on their monthly utility bill, and say in the wintertime, they’ll save money.

“Because we’re not using six space heaters spread all over the house,” Neth said.

Utilities have been offering these types of loan for a while now, but the energy researchers at the Rocky Mountain Institute say it’s a growing trend and Fort Collins is the first utility in the country to offer loans for up to 20 years.

It’s all to get customers to make these upgrades without upping their monthly bills. Fort Collins Utilities Energy Services Manager John Phelan said they’ll need everything at their disposal to push toward this utility of the future.

“There is no silver bullet,” he said, “what we need are silver bbs.”

Fort Collins hopes all these bbs, bundled up, will keep them in business in a changing world of electricity. It’s an experiment in grid innovation many in the industry are watching closely.