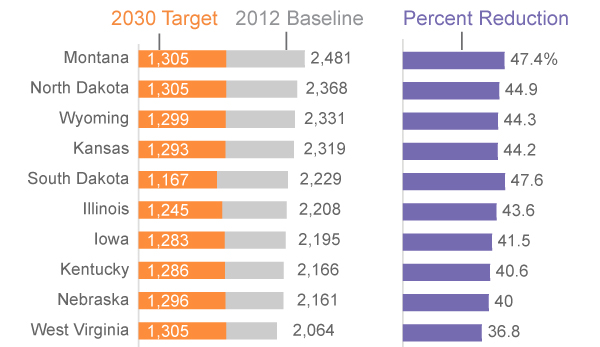 The Obama Administration announced final rules Monday for its plan to limit carbon emissions from U.S. power plants. While some concessions were made to critics, the final rules actually increase the carbon cuts demanded from states and will have long-lasting impacts on the way power is produced.

The White House previewed the announcement on Sunday with a video narrated by President Obama.

“Our climate is changing,” the President said, speaking more explicitly about climate change than in the past. “It’s changing in ways that threaten our economy, our security, and our health.[tweetable alt=”President Obama on #climatechange: This isn’t opinion. It’s fact. #CPP rules take effect in Nov.” via=”InsideEnergyNow”]This isn’t opinion. It’s fact.”[/tweetable] In the past year, the Obama Administration has undertaken a suite of executive actions to combat climate change, from proposing rules for methane leaks from oil and gas operations, to cutting carbon dioxide emissions from planes and trucks. But the Clean Power Plan, which targets the electricity sector, the country’s biggest emitter, is the most ambitious. The President himself noted this in the video, calling it “the biggest, most important step we’ve ever taken to combat climate change.”

Over the next 15 years the Clean Power Plan will cut carbon dioxide emissions from power plants nationwide by 32 percent from 2005 levels. That is, if it survives the inevitable legal challenges from coal companies and coal-dependent states. To meet that 32 percent goal, every state will have to cut their carbon emission rate (pounds of carbon emissions per megawatt hour of electricity generated) but not by equal amounts.

The graph below uses information provided by the EPA on individual state emission-reduction targets in the finalized version of the Clean Power Plan. States are ranked here by their amount of emissions in 2012. The gray bar shows the pounds per megawatt hour emitted by each state in that year; the orange bar shows the new 2030 target emission rates. The purple bar indicates the percentage reduction that target requires.

In a conference call on August 3, Janet McCabe, acting assistant administrator with EPA’s air and radiation program, called the goals are realistic for all of the states.

“States can achieve the standards in today’s rule while maintaining an ample and reliable electricity supply and keeping power affordable,” she said.

States don’t have control over their emissions targets, but they do get to decide how to meet them. States are required to finalize their compliance plans by 2018. In writing their plans, they can pick from a number of options, including switching from coal to natural gas (something that has already been happening as utilities retire aging coal plants), promoting renewable energy, or helping residents reduce their electricity demand, among other things. Perhaps most importantly, they can also trade carbon emission credits with other states, a move that effectively revives cap-and-trade at the state level.

For Dave Glatt, who has been working on North Dakota’s compliance plan from his desk at the North Dakota Department of Health, the challenge of meeting a 44 percent reduction in the state’s emission rate is “pretty daunting.” He said it’s going to take a while before he and the others working on the plan, including the state’s Public Service Commission, figure out if they can meet the target while maintaining cheap, reliable power.

“If we can’t do that, then our only option is to look at a legal challenge to get something that is achievable by the state,” he said, adding that he still supports reducing carbon dioxide emissions to some degree.

Wyoming, the nation’s largest coal producer, hasn’t even gotten that far. In an interview with Wyoming Public Radio this spring, Todd Parfitt, director of the state’s Department of Environmental Quality, said the state would not make a compliance plan in response to the draft rules. The DEQ has not said what it will do now that the final rules have been released.

Wyoming Governor Matt Mead, who has already sued EPA once, unsuccessfully, along with 13 other states, said he would continue fighting the plan, which he called “scientifically flawed… [and] damaging — not just to Wyoming, but the nation.”

According to the Energy Information Administration’s analysis of the draft version of the Clean Power Plan, coal production in Wyoming and the West will be particularly hard-hit by the new rule. Analyses of the draft rule showed Western coal production declining by at least 20 percent. The final rule is expected to reduce production even more.

Colorado, with its diverse economy, won’t feel the pain as much as Wyoming. The state is already on its way towards meeting the EPA’s target emission rate thanks to a 2010 law requiring the state to get 30 percent of its electricity from renewable sources by 2020. The state is also less dependent on coal for electricity than either North Dakota or Wyoming, as this graph illustrates.

Colorado’s Governor John Hickenlooper has pledged the state will comply with the Clean Power Plan — ignoring calls from Senate Majority Leader Mitch McConnell to do the opposite.

For Ken Colburn, head of the non-profit Regulatory Assistance Project, which helps states follow environmental rules, Hickenlooper’s position is a smart one. He believes all states should craft compliance plans, even if they intend to sue EPA over the rule. A lawsuit “may succeed, but if it doesn’t, of course, then the next thing the policy makers will do is turn back to the regulators and say, what’s our plan B?”

And by then, Colburn said, it might be too late. That’s why regulators in nearly every state are working on compliance plans right now, despite the outcry from politicians.