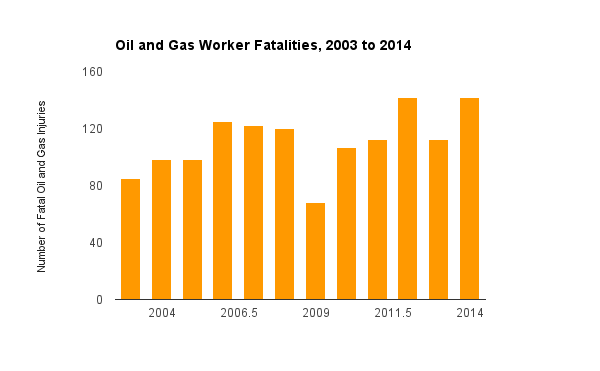 The oil and gas industry is dangerous, as Inside Energy explored in the series Dark Side of the Boom, and new data from the Bureau of Labor Statistics shows its safety record isn’t improving.

In 2014, 4,679 people died on the job in the United States. Of those, 142 or roughly 3 percent were oil and gas workers. That is despite the oil and gas industry employing less than one percent of workers.

In absolute numbers that is an increase from 2013, when 112 oil and gas workers died, but it is also an increase in the fatality rate. Employment in the oil and gas industry increased in 2014, but the number of deaths rose faster.

Several energy states have tried to address the issue of oil and gas worker deaths. In Wyoming, the industry started a safety alliance that meets regularly. The state also now requires employers to report all worker hospitalizations, which regulators say will help prevent accidents. In North Dakota, after Inside Energy presented its investigation to Governor Jack Dalrymple, he promised to look into the issue, and Reveal reports state lawmakers are crafting legislation to tighten safety standards.