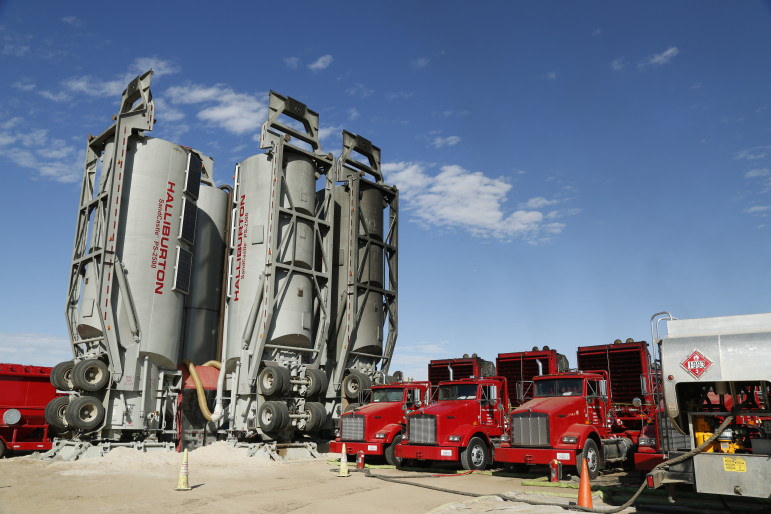 Halliburton equipment at a Colorado oil and gas site.

Halliburton, the giant, Houston-based, oilfield services company, has agreed to pay out more than $18 million in unpaid overtime wages over a two-year period to about 1,000 current and former employees nationwide. It’s one of the largest such wage violations discovered by the U.S. Department of Labor in years.

When oil booms come along, oil companies hire a lot of employees and work them hard for long weeks. In exchange, the pay is good.

“But, I really believe…the workers are receiving those hefty paychecks simply because of the hours they’re putting in,” said Robin Mallett with the U.S. Department of Labor in Houston. If overtime was correctly taken into account, the paychecks would be a lot bigger.

The oil and gas industry is one of the biggest violators of wage theft laws, especially when it comes to not properly paying overtime.

Inside Energy Research shows the industry has paid out more than $32 million nationwide in the last ten years after a series of DOL investigations. This represents back wages paid out by companies headquartered in these 15 states. It does not take into account the most recent Halliburton settlement.

An $18 million dollar finding for one company is huge. This single settlement is more than double the amount owed by all Texas-based companies in the ten years before this ruling.

“This is the largest that I’ve seen, in 26 years,” Mallett said.

Halliburton operates throughout the oilfields of the West, typically providing equipment  and services for other oil companies. The company would not agree to an interview for this story, but did release a statement:

“During a self-audit, Halliburton identified a certain number of jobs that were misclassified as exempt. The company re-classified the identified positions, and throughout this process, Halliburton has worked earnestly and cooperatively with the U.S. Department of Labor to equitably resolve this situation.”

The misclassification McMichael refers are workers who were misclassified as “exempt” from overtime, but were actually eligible for overtime pay after a 40 hour week. The DOL determined classifying the jobs in question as exempt from overtime violated the Fair Labor and Standards Act.

DOL’s Mallett said the company has agreed to pay out the $18 million to their employees by October 1st. The 1,000-plus workers receiving this money represent a fraction of Halliburton’s more than 70,000 employees around the world.

DOL discovered these infractions during a multi-year investigation focusing specifically on the oil and gas industry.

Meanwhile, Halliburton has laid off almost 16,000 employees this year as a deep slump in oil prices continues.