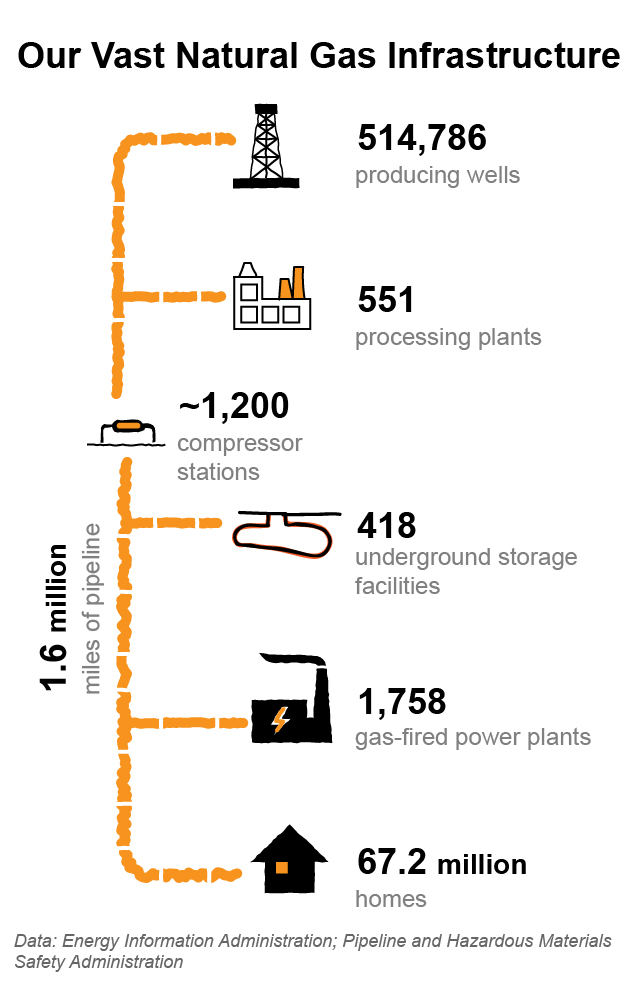 Methane is spewing from an underground natural gas storage field in southern California called Aliso Canyon at a rate of 50,000 kg per hour – the equivalent of 5 million full-grown cows. The leak is causing health problems, air traffic detours, and mass evacuations. And because methane is a potent greenhouse gas, its contribution to global warming is like having three extra coal-fired power plants.

This isn’t just California’s problem: In addition to those direct consequences, Aliso Canyon is a wake-up call about the challenges facing our natural gas infrastructure. U.S. energy strategy, as outlined by the new Clean Power Plan, hinges on the idea that burning natural gas has a smaller carbon footprint than burning coal. But that’s only true if, as natural gas travels from wells in a gasfields to the homes, businesses and power plants that ultimately use it, only trace amounts leak into the air. From the massive Aliso Canyon leak to micro-leaks spread across the vast pipeline network, if more than two to four percent of natural gas escapes, natural gas is no longer cleaner than coal.

Aliso Canyon raises questions that, just like the leak itself, won’t be resolved for months or years. In the meantime, here’s are some important things to know about about our natural gas megasystem, told through charts.

The Aliso Canyon facility is large, but it isn’t unique – hundreds of natural gas storage facilities like it are spread across the country. In addition to storage, natural gas infrastructure includes wells, pipelines, processing plants, compressor stations, and power-plants. And for half of all Americans, this system connects right into their homes to provide fuel for heating and cooking.

The graph below shows the sheer mass of our nation’s natural gas infrastructure –  much of which is a big question mark when it comes how much methane leaks. Every component of this natural gas megasystem has the potential to be leaky –  it’s simply par for the course when you store and transport a gas.

That infrastructure is old and aging

Let’s focus in on the nearly 1.6 million miles of natural gas pipeline that connects wells to homes. Much of that pipeline is decades old – a third was built before 1970. The graph below shows the age of operating natural gas pipe gathering and transmission based on the decade in which it was built. If we break it down even further, more transmission pipeline – the kind that carries high-pressure gas long distances, often across state lines – was built in the 1960s than any other decade, and nearly half (46%) was built in the 50s and 60s.

Looking at distribution pipeline – the kind that carries gas into homes and businesses – more was built in the 1990s than any other decade.

Inside Energy will continue to cover the challenges facing natural gas infrastructure. Have a question about how natural gas is produced, moved or used? Get in touch with us by emailing Ask@insideenergy.org or Tweet at us @InsideEnergyNow.