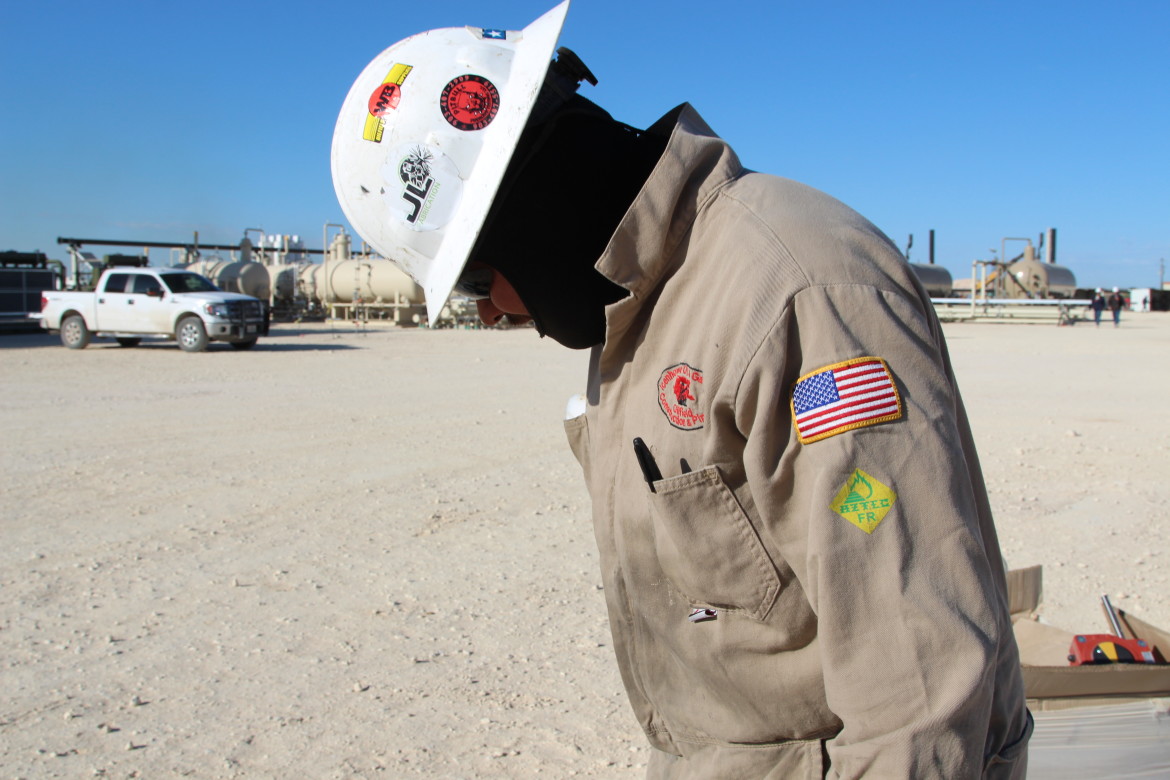 This oilfield worker said heis glad to have a job. Hundreds of thousands of people in the energy industry have been laid off since the price of crude oil peaked in the summer of 2014. This oilfield worker said he is glad to have a job. Hundreds of thousands of people in the energy industry have been laid off since the price of crude oil peaked in the summer of 2014.

Nearly a dozen west Texas cities, counties, hospitals and school districts are facing the possibility of a bond credit downgrade in the coming months by Moody’s Investor Services, one of the country’s “Big Three” ratings firms. That because those local institutions rely on energy-related tax revenue, which has fallen precipitously. And the possibility of a bond downgrade is a threat facing other oil and gas states as well.

In Texas and other energy-producing states, bonds are not an abstract consideration. They are used to build vital infrastructure such as roads, sewer systems, schools, mass transit and hospitals.

One such example in the Permian Basin is a state-of-the-art emergency room at Midland Memorial Hospital. The hospital is within the Midland Hospital District, one of the entities on Moody’s watch list.

It’s a state-of-the-art ER, finished in 2012. The money to build it came from bonds issued by the hospital. Were Moody’s to cuts their bond credit rating, as the agency warned might be possible in early March, these bonds would become much more expensive and, perhaps, riskier for investors.

“You can get lost in Moody’s report around what’s happening here,” said the hospital Chief Financial Officer Stephen Bowerman.

“But what their issue is, is very important,” Bowerman continued, “And that is the cold hard fact that our economy has cooled dramatically and very quickly it cooled in the last 12 to 18 months.”

He said no new infrastructure is planned at the moment.  But were Moody’s to issue a downgrade, future construction might be more expensive to build. Bowerman says even without new building plans, pain in the oilfield reverberates here.

Bowerman said bond ratings are doubled-edged. When the boom goes bust, the hospital may be subject to a ratings downgrade. By the same token, when the energy market was healthy and then surging, Midland Memorial Hospital built a new ER with bonds.

“We got the great rating that we had in a very, very hot economy. That really had nothing to do with the hospital’s operations,” Bowerman continued, ”Our financial picture isn’t dramatically different today than it was five years ago as a hospital operation. But what’s changed is the tax base and the value of the minerals in the ground. They’re not was valuable as they were two years ago.”

The city of Midland, along with neighboring Odessa, are the unofficial twin capitals of the Permian Basin  Both are also threatened with a downgrade, along with a nearby school district, one county and six other hospital districts. But well before Moody’s announcement, the City of Midland went on the defensive: cutting budgets and, freezing new hires except for essential personnel like Fire and Police.

For that, the city may be in better shape. Moody’s competitors say things aren’t not so bleak at the Permian Basin’s biggest city.

“For Fitch & Standard and Poor’s, we’ve actually been able to hold our Triple A, highest bond credit rating that they have available,” said City of Midland spokesperson Sara Bustilloz.

“They (Moody’s) mentioned that our sales taxes are down, the oil economy is not looking great right now but that we have been able to weather the storms in the past and that they have faith that we’re going to do fine this time as well.”

To get a sense of historical context, we spoke with Professor Joe Hahn. He tracks tracks the energy markets at the McCombs School of Business at the University of Texas at Austin. He said bond ratings are a critical economic benchmark for entities wishing to build infrastructure.

“It’s an issue for concern in the short-term certainly,” Hahn said, “But it’s nothing new. Boom and bust cycles in the energy industry have always gone on and they probably always will.”

Moody’s will issue its final ruling for west Texas by early June. It has already recently issued either downgrades or negative outlooks for other energy states, including Oklahoma, Louisiana, North Dakota and Alaska, all due to energy’s downturn.