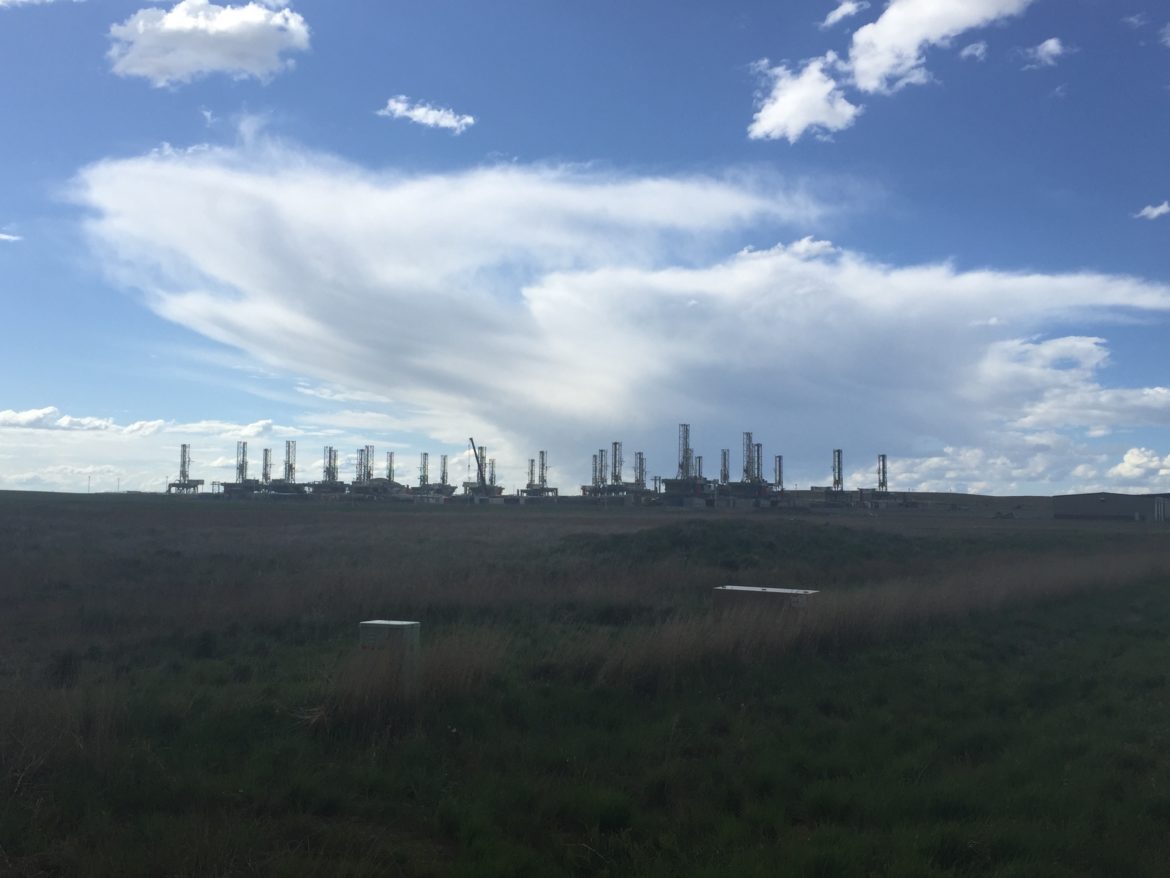 When it comes to energy, presidential candidate Donald Trump has left a lot to the imagination. But today he’s traveling to Bismarck to address energy industry professionals from all across the country at the Williston Basin Petroleum Conference. There is a lot of ground to cover: prices for fossil fuels are all way down, new environmental regulations are being put in place, and global concern over climate change is growing. Pam Link says power plants and pipelines are her union’s “bread and butter.”

Pam Link mans a table covered in bright orange swag. She is the Director of Business Development and Governmental Relations for the Laborers’ International Union of North America (LiUNA!) for North Dakota and Minnesota. This labor union has around 500,000 members in all 50 states and Canada. Link explains that for years, the majority of their work in North Dakota has been on pipelines and at power plants.

So it is no surprise that Link feels strongly about keeping fossil fuels in the mix.

“We don’t want coal to go away. We listen to what’s happening in Wyoming with hundreds being laid off in the Gillette area,” Link said.

Ron Ness, President of the North Dakota Petroleum Council, wants to hear Trump talk about reining in federal environmental regulations that, he says, come at a high cost to oil and gas producers.

“You’re getting bombarded. It becomes a mental fatigue issue as much as a resource issue where you’re fighting with your own government at a time when you’re fighting for survival,” Ness said.

But not everyone in Bismarck is thinking about rig count and employment data.

At the Bismarck Public Library, in front of a handful of people, Austin Klein goes over the Austin Klein listens to protestor’s questions during a meeting at the Bismarck Public Library.

details of what to do and what not to do during a protest. It is the first one he’s ever organized.

Klein says this protest is not only anti-Donald Trump.

“I’m not against oil extraction, I just want it to be done in the right way,” Klein said.

He’s planning to highlight some of the problems that have come along with energy development: increased crime, sex trafficking, environmental issues, and worker safety. Inside Energy found that in 2014, working in oil and gas was nearly seven times more deadly than working in other industries.

“I would like to see rational policies that respect people and respect the environment. I would want to vote for someone who would take that into consideration when they’re making these energy policies,” Klein explained.

What does one of North Dakota’s  only environmental lawyers think about Donald Trump’s visit?

“I don’t know what I think. I’m gonna go and watch him though,” Derrick Braaten said with a laugh.

Braaten questions what sort of power any president really has to take on every energy-related issue.

“I guess what I would like to see, if anything I could say on a broad level, is a president that acknowledges climate change is real. If we could just start with that,” Braaten said.

Donald Trump has been dismissive of climate change, calling it an expensive hoax and said he would renegotiate the Paris Climate deal.  He’s being advised on energy policy, unofficially, by North Dakota Representative Kevin Cramer, also a climate skeptic, who believes fossil fuels are “a way of life.”