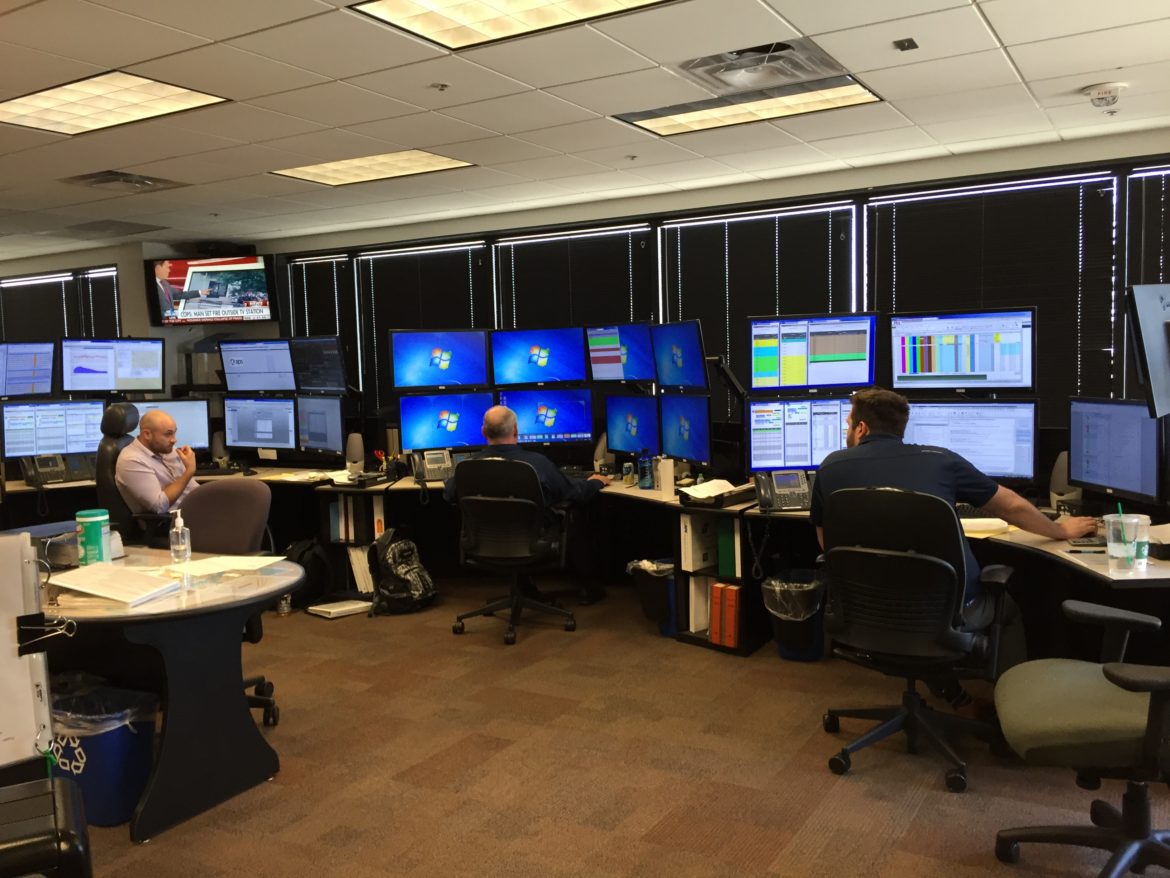 The people who run our electricity grids are trying to figure out what to do with solar and wind power that is generated when no one needs it.

Take California – there’s enough solar there now to serve more than three million homes. But during the day, especially in the spring, demand is low and generation is high.  So, that clean power has to be sent elsewhere.  Right now, its going across state lines to Arizona.

Just after lunchtime on the trading floor of Arizona Public Service in downtown Phoenix, three guys are chasing deals.

“If there’s another utility that can produce power for the next hour cheaper than what we can out of our own power plants, we’d like to buy that power from them,” Brad Albert said, who is in charge of resource management for APS – the state’s largest utility. Brad Albert directs resource management for Arizona Public Service – a utility that is increasingly being paid to take power from California when it has a surplus of renewable energy.

Imagine a blowout sale when for a couple hours you’re actually paid to take stuff. Such is Arizona’s energy situation right now with its next door neighbor, California.

“That’s very typically what happens every day during this time of year. We’re seeing that same pattern,” Albert said.

It’s a mild, sunny, spring day across the southwest. Customer demand is low, but solar panels are churning out lots of power. So much that California has a surplus. Negative pricing incentivizes utilities in nearby states to take some of that excess power. Right now – just before 1 o’clock – that ranges from negative three to negative seven dollars per megawatt-hour. But by the end of the day, prices will have rebounded.

“When everyone goes home from work, and turns on their TV, cooks dinner,” Albert said. “We typically see power prices in that evening peak period being somewhere around 30 or 40 dollars per megawatt-hour.”

It’s a big fluctuation and a relatively new phenomenon, said Albert, primarily driven by California’s aggressive adoption of renewables. For now, that’s good news for APS customers because it translates into savings.

“We do it to the extent we can, but we are a little limited because we have so much solar on our system, too,” he said.

Add up all grid-scale solar and rooftop systems in APS territory and more than 1,000 megawatts have been installed. Albert anticipates this problem will become even more pronounced as California marches towards its goal of getting half of all its electricity from renewables by 2030.

This is the warning utilities are sounding about the advent of solar. It’s an intermittent resource and does not always match demand.

But not everyone sees this as a “problem,” including Jim Baak with the nonprofit Vote Solar.

“We think of this as, actually, a real indication of how far solar has come in terms of price and availability and accessibility,” Baak said.

He calls this negative pricing part of the “growing pains” of an industry that is still, in many ways, stuck in the last century.

“We see this as new technologies and renewable clean resources that have become very very cost effective being put onto a grid that was designed under a very different structure,” he said.

Traditionally, utilities were vertically integrated and owned every step of the process from generation to distribution. Nowadays solar power floods the grid even when demand is low. Baak concedes this dynamic isn’t sustainable, but he said many Western utilities are beginning to put in place the tools to mitigate oversupply concerns.

“The market is actually working well. The problem is you still have these contracts that are importing gas into California at a time when they are asking to curtail renewables,” he said.

Baak said utilities need to scrap old power plants that aren’t flexible and can’t be backed down when necessary.

Consumers will also be a part of the new grid, he said.

One example: “I am going to generate from my solar and either charge my electric vehicle or charge a battery, and then I can actually sell that back to the utility when the utility needs it most,” he said.

Baak points out the transition to a more flexible regional grid is already underway.

The California Independent System Operator (CAISO) is working with utilities around the West to expand the market for energy.  Mark Rothleder with CAISO said the excess of renewable energy at certain times of day is manageable.

“As we increase our renewable output, we do expect the oversupply condition will increase in frequency and potentially magnitude,” Rothleder said.

He explains paying Arizona utilities to take power is often more cost-effective than shutting down large scale solar farms, but it is not sustainable.

“That’s why we’re looking at things like the energy imbalance market, or regional opportunities to exchange and share this energy when it’s mutually beneficial for other parts of the system,” he said.

When solar rich states like Arizona or Nevada have too much energy, they can shuttle that to other areas of the West with different energy supplies, like wind or hydropower.

Arizona will join this “Energy Imbalance Market” later this year. It’s a sophisticated system that allows utilities across the West to balance demand in short intervals. This expanded market will help deal with oversupply and could eventually save APS from 7 to 18 million dollars annually.

Brad Albert with APS said better integrating renewables is not only an economic standpoint issue. “At stake is the reliability of the grid,” he said.

A grid that most people – whether you produce your own energy or not  – still need.