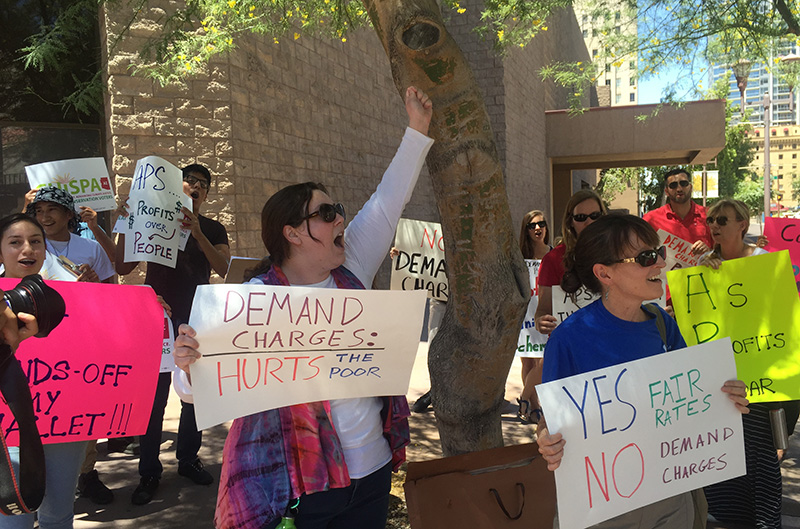 Arizona Public Service is facing backlash over its proposal to add a new charge based on demand to customers' bills. Arizona Public Service is facing backlash over its proposal to add a new charge based on demand to customers\’ bills.

Julie and Jim Powell’s air conditioner has been fending off the summertime heat since they bought their traditional Sun City home two decades ago.

“It’s been a workhorse. It’s probably twenty years old, but it does the job,” Julie Powell said, peering at the noisy unit from the shade of her back porch. It’s only midmorning, but her graveled backyard is already too hot to venture across.

Like many in this retirement community west of Phoenix, the Powell’s enjoy the golf and bowling, but they also spend a lot of time at home, so they keep close tabs on their electric bill. Jim and Julie Powell have lived in Sun City for more than a decade and worry their electric bill could go soon up.

“I’m a turn the fan off, turn the light off, turn everything off kind of person,” Julie Powell said. “I’ve got my husband convinced his TV goes off automatically.”

They soon may have something else they need to keep a close eye on. Indoors and now with only the distant hum of the AC in the background, Jim Powell, a retired police officer, leafs through their summer bills from Arizona Public Service (APS). Some months are triple what they pay during the winter and fall, but that’s no surprise.

But ever since he has heard about a new charge that could be tacked onto his APS bill, one linked to how much power you use at certain times, he’s begun to worry.

“With this demand charge, it could be out of the blue every month something different,” he said. This new charge would be based on that one hour during the week between 3 and 8 p.m. when the couple uses the most energy. APS would then bill for that month according to their demand during that brief window.

Jim wonders what if they have to turn up the AC one evening, while his wife is cooking.

“All of a sudden we would have spiked our kilowatt usage way up from what it normally is for a short period of time, but yet we are going to get stuck with a bill for that,” he said. “I don’t think that’s right.”

While this kind of rate has been around for decades – mostly for commercial customers – APS would be the first utility in the country to mandate it for practically all residential customers.

The Powell’s aren’t the only ones upset.

A week after APS filed its rate request earlier this month, consumer activists protested in downtown Phoenix, chanting and holding signs like “Surge Pricing is Unfair” and “Profits Over People.” State regulators have already received hundreds of public comments opposing the rate change.

“It’s not as complicated as some make it sound,” explained Stefanie Layton of APS. “Really if you just stagger the use of your major appliances, that’s an excellent way to manage your demand.”

This isn’t a new charge on top of existing ones, but rather a different way of carving up the bill, she said. For example, the cost of energy per kilowatt-hour will go down under the new rates.

Some customers will save money, others will not, Layton said, but “it better aligns how much customers pay with the costs they impose on the system.” That’s key to why APS wants this demand charge.

There are still a lot of unknowns

Most of the utility’s costs are fixed – things such as substations, transmission lines, power plants. All that infrastructure must be in place to meet peak demand, which drives up what the utility pays. Layton said demand charges incentivize customers to put less strain on the grid, particularly during those hot summer afternoons and evenings.

For APS, demand rates provide a fair way to account for how customers are using energy differently. In particular, the utility points to the proliferation of rooftop solar, which has already caused a billion dollar cost shift onto all the other ratepayers, according to APS filings. As part of its rate case, utility is not only proposing demand-based rates, but also to dramatically lower how much rooftop solar customers are reimbursed for the excess power they produce, known as net-metering.

Advocates for rooftop solar have warned those changes would decimate Arizona’s solar industry.

James Sherwood studies rate design at the Rocky Mountain Institute. He said there’s a “void” of data about how residential customers respond to demand rates because it’s never really been tried on a large scale.

“There are still a lot of unknowns around this and whether demand charges send a price signal that is effective.”

While in the past flat volumetric rates were “good enough” for residential customers, Sherwood said new rates, including ones with a demand component, are on the horizon as the energy landscape changes. A major are the advances in distributed energy resources, like battery storage or rooftop solar panels.

“The rates that people are being charged were designed around one-way power flow and now you have this other way, and it kind of complicates the situation,” Sherwood said. “APS and other utilities around the country are looking for ways to solve that challenge.”

Plus the pattern of energy use is shifting, often to later in the day, which forces utilities to go out and find energy from other sources, he said.

“Demand charges are ultimately a tool that can help with cost shifts, but, at the end of the day, that is really just one of a variety of things we need rates to do,” Sherwood said.

Rates also need to provide stability and a simple experience for customers, he said, adding that the “the question is around whether demand charges can do all of the above or really just” ensure the recovery of costs.

About 10 percent of APS residential customers voluntarily use a demand charge and a survey by the utility shows most are saving money.

Pat Quinn has tried out the APS demand rate and is not happy with it. He’s the former director of Arizona’s Residential Utility Consumer Office.

“It’s certainly good for the company, but it’s not good for consumers at all,” he said. Quinn said the demand charge can lead to unexpected swings in your monthly bill. When he tried it out, the charge varied from $30 to $150. Many people may not be able to design their lifestyle according to how they use energy, he said.

“This will certainly cause people to have to change how they operate and they’d actually have to understand it and have the tools available to do something about it.”

APS hasn’t announced plans to give consumers new technology yet, but it is undertaking a major education campaign as the rate case proceeds at the Arizona Corporation Commission in the coming year.

APS is not the only Arizona utility to consider mandatory residential demand charges.

A small Arizona utility with only about 90,000 customers tried doing that earlier this year, but eventually withdrew its proposal after backlash from hundreds of angry customers.