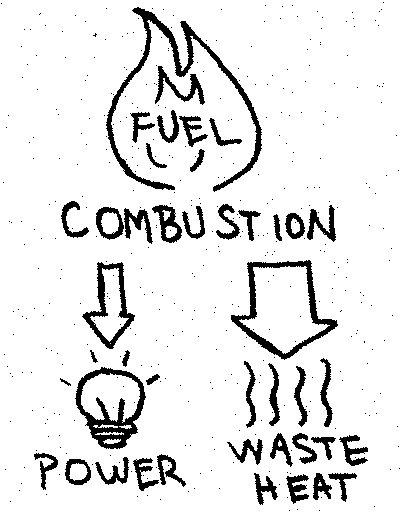 When we talk about energy efficiencies, we’re usually talking about efficiencies at home – turning off the lights, unplugging appliances. But power plants have efficiency issues as well – a LOT of energy is lost when we burn fossil fuels to make electricity.

We’re thinking about this because we received a question from a student, as part of our IE Questions project. Garrett Bess is 14, and he just finished up eighth grade at Wellington Middle School in northern Colorado. Here’s his question:

To simplify a bit, Garrett is interested in the waste heat created when energy is produced in a power plant.  Can it be reused?  Recycled?  Turned into energy?  He got the idea from his uncle, who runs two gas turbine plants in Louisiana.

That’s an important question, so we’ll pause for a quick science lesson. In a thermal engine, when fuel is burned at high pressure, heat enters the system and makes something happen – in our case, moving a turbine that generates electricity.

But the process always wastes a lot of heat. For instance, a coal fired power plant is only a little more than 30 percent efficient. On its own, a natural gas turbine doesn’t do much better. But there are ways to improve. Garrett’s uncle, Bill Ray, knows a few of them. His plants already use waste heat to power generators in a system known as combined-cycle.

Essentially, the system begins with two side-by-side natural gas combustion turbines – their design is similar to a jet engine. They do their thing, transforming heat into power.

Then, Ray said, “We take that exhaust from those machines and push it into heat recovery steam generators.”

The waste heat is used to make steam, the steam powers its own turbine, and creates additional power. In a combined cycle system, as is common in many natural gas powered electricity plants, waste heat is used to power additional steam generation.

How much additional power can a combined-cycle facility create? Ray estimates the gain for his combined cycle set-up is “upward of somewhere around 60 percent.”

That’s pretty good. But can we do even better?

We asked Anna Chittum, with the American Council for an Energy-Efficient Economy. She says, yes, we can do better, and the answer is something called combined heat and power, or CHP. We’ve reported on CHP in the past.

“A combined heat and power system a best in class might be closer to 85 percent efficient,” Chittum said.

That high efficiency comes from the fact that the heat isn’t used to generate more electricity – but is used more directly as heat.

“(It can be) hot water, it can be space heating,” Chittum said.  “You can run it through a system called absorption cooling, and you can produce air conditioning.” In a combined heat and power installation, power is generated next to a source with a need for heat, like a hospital.

That works well for large institutional users like university campuses and hospitals.

But combined heat and power systems currently only make up about 8 percent of the country’s total installed electric generating capacity, and 12 percent of total power generation, according to the Department of Energy.

If CHP so efficient, why isn’t there more of it?  A big reason: CHP has a PR problem.

“It’s been called CHP, it’s been called cogeneration,” Chittum said. “I think there are some really interesting benefits of CHP that are just poorly understood.”

Those benefits would be things like better reliability, and the ability to balance out intermittent renewables, like solar and wind. And now, with new power plant regulations on the horizon, states are scrambling to find new efficiencies and they’re asking experts for advice.  Anna Chittum said her organization is getting far more inquiries than the past, asking, “Hey, how do we think about running a CHP program?”

But still. Can we ever get to that perfect 100 percent efficient power generation? We put it to Bill Ray.

“There’s always a never ending battle that would make it difficult to ever reach 100%,” he said, “but I think we can always continue to try, and I think we can get a lot closer than we are today.”