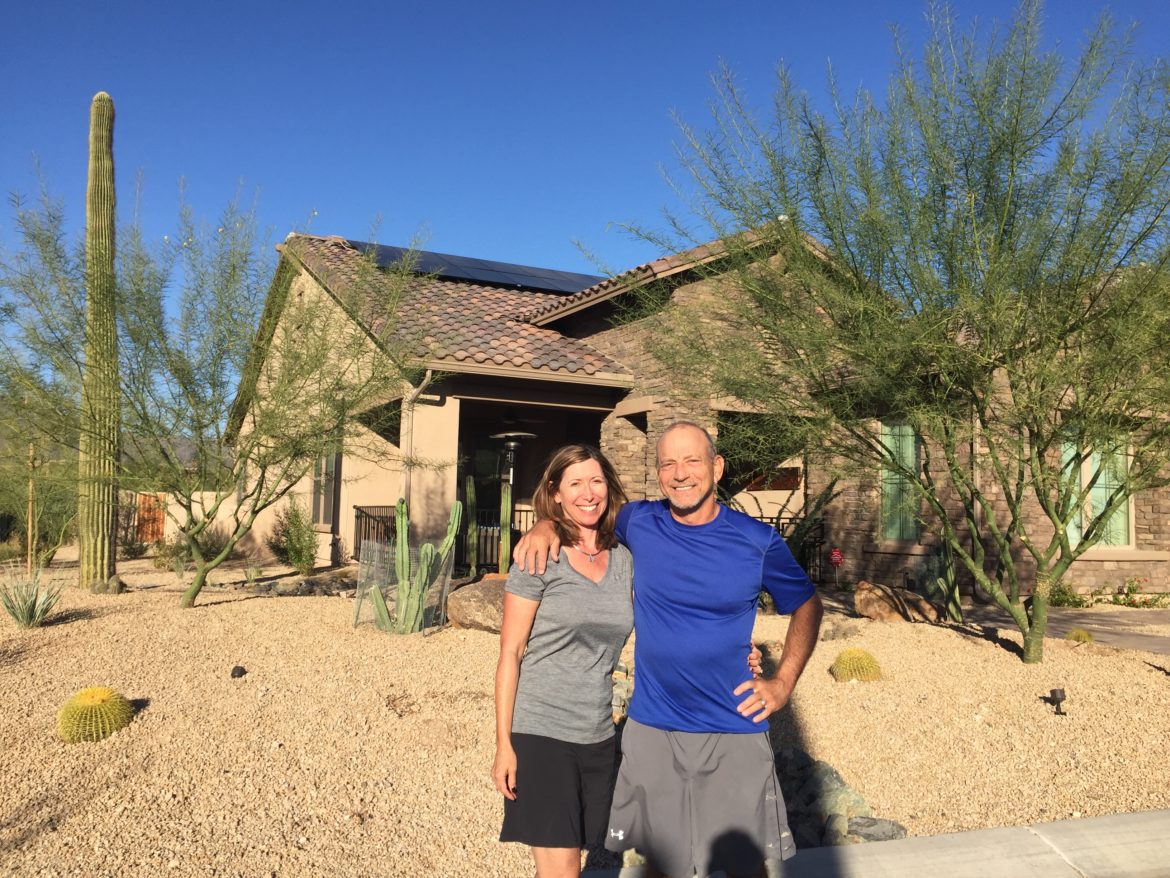 The Shulmans outside their Carefree, Arizona home.

After more than two months of waiting, Fred and Rhoda Shulman’s solar system is about to start paying off.

“It’s been on a couple times this week so we know it’s producing. We’re putting things back on the grid,” Fred Shulman said as he points to the panels lining the rooftop of his home in Carefree, AZ, a quiet, desert community north of Phoenix.

The Shulmans’ personal solar farm feeds back into the electrical grid when it churns out excess power. The utility will then pay them for those kilowatts at close to retails rates in the form of credits, known as “net-metering.”

“If they stop doing that, then all those great numbers we crunched won’t be worth the paper we put them on,” Rhoda Shuman said. Solar panels on the roof of Fred and Rhoda Shulman’s home in Carefree, Arizona

Like many utilities, Arizona Public Service (APS) – the state’s largest utility – calls net-metering a “subsidy.” In its recent rate case, the utility reports that its 40,000 solar customers have already caused a 1 billion dollar cost shift onto non-solar customers. Solar advocates, however, argue such claims are overblown and that rooftop solar ultimately saves utilities money by eliminating the need for new power plants or transmission lines.

This tension, however, is why solar customers like the Shulmans are closely watching the usually sleepy race for the Arizona Corporation Commission – a powerful 5-person panel of regulators that oversees utilities and energy policy in the state.

Not that the campaign hype has been hard to miss.

“I was actually really shocked. I didn’t think that [race] rose to the level of like mayors and governors,” Rhoda Shulman.

It may not be at the top of the ticket, but key battles are being waged on many state ballots over the future of energy this year. As the influence of solar grows, that industry and the power companies are clashing. As one of the top markets in the country, Arizona is ground zero for this fight. Both sides are hoping to tip the scales in their favor by spending big money to get the right regulators elected.

That pro-utility political action committee, Arizona Coalition for Reliable Electricity, has spent three and a half million dollars on the commission race.

Meanwhile, SolarCity – one of the nation’s largest rooftop solar leasing companies – has also thrown in more than three million dollars. Ads from its PAC, Save Our AZ Solar, say “Mundell and Burns are fighting to keep our electric bills low,” arguing to “bring transparency and ethics back to the corporation commission,” and keep Arizona’s 10,000 solar jobs.

This isn’t the first commission race with huge amounts of outside money. In fact, much of this year’s campaign talk has focused on past races.

“This cloud has been hanging over the commission,” Commissioner Bob Burns, who is running for re-election, declared during a recent Arizona PBS Debate. “It all starts with $3.2 million perceived to have been spent by a regulated utility to get people on the commission.”

Burns and many others say APS may have secretly funneled millions into the 2014 election to help get its two choice candidates on the commission. Despite pushback from fellow commissioners, Burns recently subpoenaed APS and Pinnacle West for those records. In response, the utility sued him for what it called “harassment” and a violation of free speech, among other things.

Burns’ quest to uncover this alleged “dark money” has made him a favorite of the solar industry, despite the utility’s support of his campaign, too. The reasoning: APS and its CEO Don Brandt would have even more trouble with the two Democrats running for the commission.

“Don Brandt and the other executives of APS have created a culture of corruption,” Democratic candidate Bill Mundell declared last month. He and running mate Tom Chabin have also taken a position that runs counter to APS’ on solar policy.

But Matt Benson, spokesperson for the pro-utility political action committee, said the Democrats will not be able to be impartial if elected.

“The two democrats in this race have truly disqualified themselves by making such inflammatory and misleading statements against Arizona Public Service and Pinnacle West,” Benson said.

“They’re going to represent the interests first and foremost of SolarCity above and beyond those of consumers who want to see sustainable energy, but they also need that energy to be affordable,” he said.

Some big decisions are on the horizon for the commission. APS has proposed lowering the rate for net-metering dramatically and charging customers based on the one hour of the month during peak when they use the most energy. It’s a rate scheme called a demand charge and no utility in the country has moved most of its residential customers onto such a rate.

“All of these debates are kind on the cutting edge for how people are rethinking future rooftop solar policy,” Cory Honeyman, Associate Director of U.S. Solar at GTM Research, said. “In that sense, Arizona and this election really are important precedent-setters in thinking about how rooftop solar policy could shake out.”

Arizona’s not the only place fighting over energy this cycle.

A Nevada ballot initiative would essentially deregulate the state’s electricity market, while a proposed constitutional amendment in Florida – totally backed by utilities – aims at protecting non-solar customers from having to subsidize solar costs.

“Across the country, solar has blurred some of the traditional party lines that have existed within the GOP and the Democrats,” Honeyman said.

Free enterprise and consumer choice can appeal to all sorts of political persuasions, he said, citing the rise of the pro-solar Green Tea Coalition.

But this dynamic can also make figuring out which candidate to vote for difficult.

Rhoda and Fred Shulman of Carefree, AZ said they did not pay attention to party when they cast their early ballots.

“We checked out who was being funded by APS’ Pinnacle West Corporation or whatever that group is,” Rhoda Shulman said. “We made sure to vote for the people who were not being funded by them.”

Indeed, one of the most influential voting blocs could be this growing coalition: the more than 40,000 APS solar customers, not to mention the thousands of people whose jobs are tied the industry.