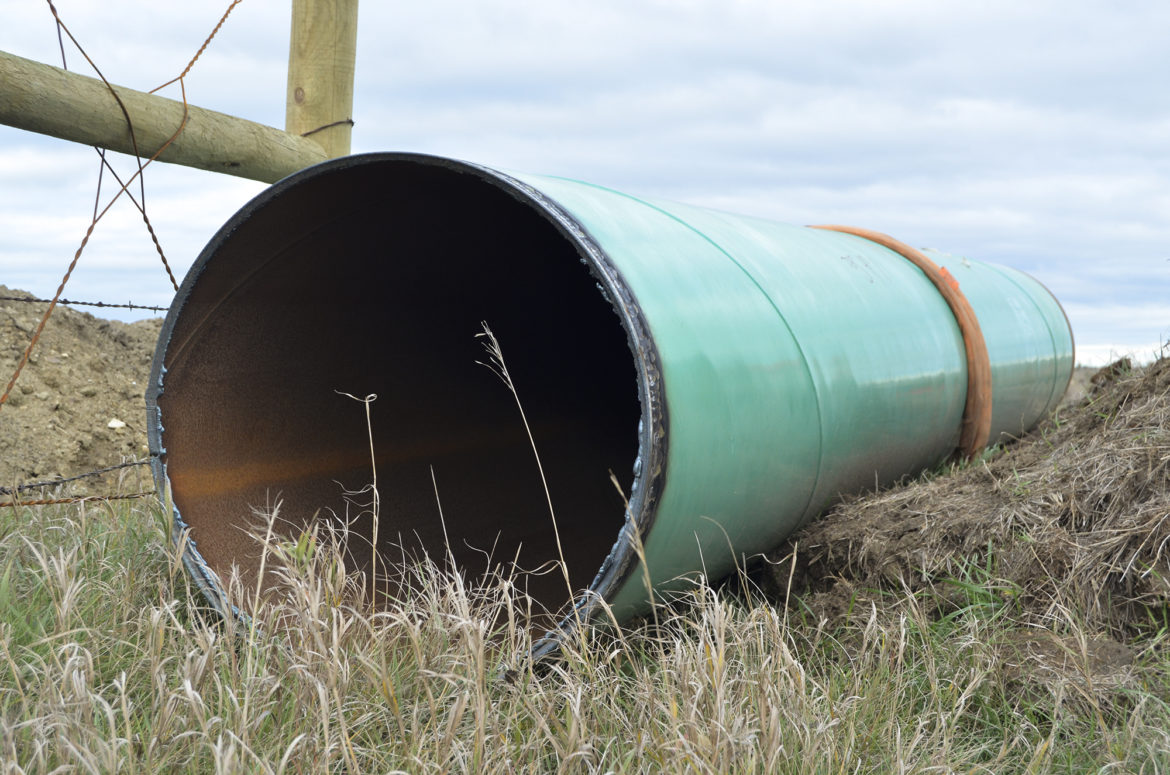 A section of the Dakota Access Pipeline sits at a construction site in October.

With Donald Trump as president, North Dakota’s oil patch got its wish: a permit to complete the massive Dakota Access Pipeline.

The easement to complete construction under the Missouri River was signed Feb. 8. With that permit in hand, the 1,200-mile pipeline could carry Bakken crude to market in Illinois in as little as 80 days.

But the pipeline faces one final hurdle: a legal challenge from the Standing Rock Sioux Tribe, whose reservation lies next to the pipeline route.

The tribe says it will continue to fight in court on grounds that the Army Corps of Engineers — by granting the easement — is revoking the environmental review it had just launched. That review, known as an environmental impact statement or EIS, would take an in-depth look at some of the more controversial aspects of the pipeline, including alternate routes and the tribe’s rights under 19th-century treaties that granted it land far beyond its current reservation boundary.

“The environmental impact statement was wrongfully terminated,” Tribal Chairman Dave Archambault said. “The Trump administration — yet again — is poised to set a precedent that defies the law and the will of Americans and our allies around the world.”

The tribe sought a temporary restraining order with South Dakota’s Cheyenne River Sioux to block construction, but a judge denied granting one Feb. 13. The judge still has to rule on a separate request from Cheyenne River for a preliminary injunction. Meanwhile, an attorney for Standing Rock says the tribe intends to seek a final judgment on its lawsuit.

Even with that decision, an appeal to the circuit court is likely. But the tribes fighting the project are up against the clock, as construction nears completion.

While the legal battle plays out, news that the easement would be granted drew praise from North Dakota officials and scorn from indigenous and environmental groups.

Sen. Heidi Heitkamp, D-North Dakota, said the state needs pipeline infrastructure. North Dakota still relies on trains to carry about a third of its oil out of state, which safety experts argue is a more dangerous mode of transportation. And it’s cheaper to carry oil via pipeline.

Heitkamp also expressed relief at the resolution. The project has been stalled for five months amid protests and a decision from the Obama administration to review its permitting decisions.

“A lot of people in Morton County will be grateful that this process is moving forward,” Heitkamp said. “We’ve been in limbo for too long.”

Protests in south-central North Dakota’s Morton County have disrupted life for local residents. Protesters living in camps set up along the Missouri River have staged demonstrations — sometimes on ranchers’ land where the pipeline went through, and other times on roadways.

A state highway remains shut down, preventing protesters from accessing construction sites. It also means protesters and locals have to travel an extra half-hour to get to Bismarck, the nearest urban area.

“This is a key step toward the completion of this important infrastructure project, which has faced months of politically driven delays and will allow for safe transport of North Dakota product to market,” he said.

But Sally Jewell, interior secretary under President Barack Obama, criticized the easement decision in an interview with the Washington Post. She said the Corps did not adequately consult with the tribe in permitting the pipeline. The Environmental Impact Statement that the Corps promised under the Obama administration would have given the tribe a chance to express its concerns, she said.

“So the decision to not do any of that is reneging on a commitment they made, and I think it’s fair to say that I’m profoundly disappointed with the Corps’ reversal of its decision to conduct an environmental impact statement and consider alternative routes,” she said. “This is a clear reversal of a commitment on the part of the U.S. Army Corps of Engineers on something they gave thoughtful consideration to when they decided to do an environmental review.”

Resistance Plays Out In Cities, Camps

Protesters vow to take a “last stand” to stop the pipeline.

They called for a day of action on Wednesday, urging people around the country to organize against the project.

In San Francisco, protesters sat on the sidewalk in defiance outside a federal building.

“Donald Trump will not build his Dakota Access Pipeline without a fight,” the Indigenous Environmental Network said in a statement. “Expect mass resistance far beyond what Trump has seen so far.”

Several city governments are also taking a stand. The Seattle City Council voted Tuesday to withdraw $3 billion of its funds from Wells Fargo, which is an investor in the pipeline. The city of Davis, California, also opted to divest money from the same bank.

On the ground in North Dakota, a few hundred protesters remain camped despite requests from the Standing Rock Sioux Tribe to leave.

Whether they’ll be able to stay remains to be seen. The Corps of Engineers on Feb. 22 plans to close its land where the main camp lies. And the Bureau of Indian Affairs is sending officers to help close other camps on the reservation.

“Our top priority remains public safety and the environmental cleanup of the protest camps that lie within the floodplain to avoid an ecological disaster when potentially dangerous spring flooding arrives,” Burgum said.

Heavy winter snows are expected to melt soon, as is the frozen Missouri River and nearby Cannonball River. An ice jam could quickly cover the camps in water.