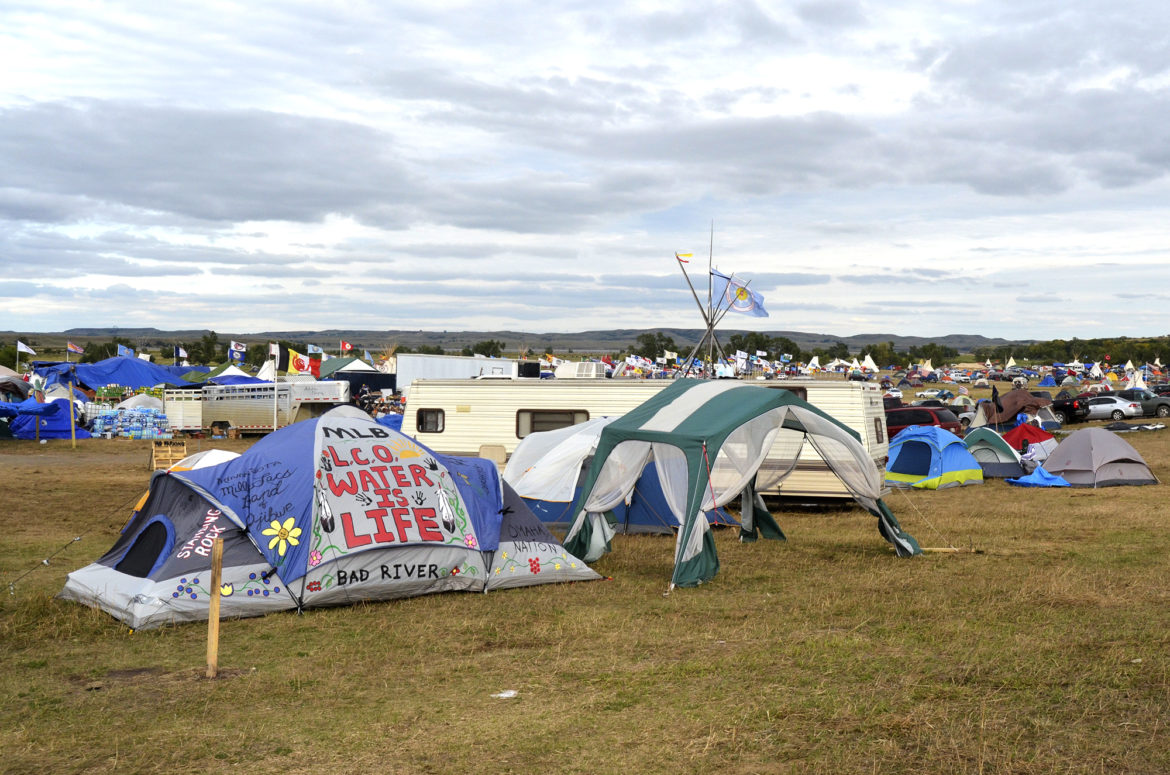 While thousands of protesters camp in tents and tepees to protest the Dakota Access Pipeline in North Dakota, the oil industry continues to advocate for the pipeline's construction.

The Obama Administration’s decision to temporarily halt construction on part of the 1,200-mile Dakota Access Pipeline has the oil industry on edge.

It was evident at the North Dakota Petroleum Council’s annual meeting, where the pipeline protests cast a shadow over an industry struggling amid low oil prices. “[The pipeline is] very critical to being in place for any kind of recovery and growth in the Bakken production here,” said Jack Stark, president of Continental Resources, one of the largest oil producers in the state.

He told the 450 in attendance that Bakken crude needs to get to market, and the Dakota Access Pipeline will cut transportation costs. As a result, it will put North Dakota oil on a more level playing field with the rest of the country, he said.

The pipeline is supposed to carry half the state’s daily crude production to Illinois.

“We haven’t had enough pipeline capacity,” said Andy Black, president of the national Association for Oil Pipe Lines. “So that meant that crude oil couldn’t get moved to where it could be turned into products for consumers. Or it had to go on modes that cost more and weren’t quite as safe.”

Those modes include rail or truck. When they crash, they can be deadly, like the 2013 fiery oil train derailment in Quebec that killed 47 people.

The boom in shale oil and gas production in North Dakota was followed by a boom in pipeline construction here — 1,400 new miles built over the past five years, according to data from the Pipeline and Hazardous Materials Safety Administration. More oil is transported by pipeline now than rail.

That risk concerns the thousands of protesters camped on the North Dakota prairie who oppose the Dakota Access Pipeline. While thousands of protesters camp in tents and tepees to protest the Dakota Access Pipeline in North Dakota, the oil industry continues to advocate for the pipeline’s construction.

Like them, landowner Tom Wheeler was once skeptical of pipelines.

“I was definitely against pipelines,” he said. “I did not want my land tore up with these pipelines. But in the end you have to have pipelines in order to save the roads.”

A few years back, large trucks carried oil past his house in the Bakken. Traffic’s since died down and the potholes disappeared now that oil, gas and wastewater lines cross his property.

“It’s going to get the crude oil to the places that need it, can use it,” he said. “If we could use it all in North Dakota, it wouldn’t matter. But we can’t.” Dee Beckler lives near the protest camps in North Dakota. She’s working on an outhouse next to her home. To get supplies, she’s had to cross through a traffic checkpoint set up amid the protest.

That’s the attitude shared by some North Dakota residents like Dee Beckler who live near the protest camps along the Missouri River.

“I have very good friends that are Natives, but I disagree with what’s going on right now with them,” she said.

Protesters camped a few miles south of her home worry a potential spill would contaminate the Standing Rock Sioux Reservation’s drinking water. The tribe has sued, trying to stop the project from crossing under the river upstream.

“We all just think it’s ridiculous that we’ve got be on pins and needles down here not knowing what is going to happen,” Beckler said.

Meanwhile, she’s trying to finish work on an outhouse next to her home.

To get supplies, she has to drive through a national guard checkpoint. North Dakota’s Guard arrived earlier this month to relieve law enforcement who were manning the zone. They say they’re there to ensure public safety.

The protesters here claimed a small victory earlier this month when the federal government announced it would block construction at the Missouri River crossing while reconsidering its permitting decisions. That move did not go over well with the oil industry here.

“That was a bad message for the U.S. economy,” said Ron Ness, president of the North Dakota Petroleum Council. Andrew Browning with the Consumer Energy Alliance says the oil industry needs to get out its message of how the pipeline benefits the country.

The pipeline debate also presents another challenge for the industry: messaging. The industry’s up against well-organized environmental groups aiming to stop the development of all fossil fuels, said Andrew Browning with the national Consumer Energy Alliance.

He said it’s time for the industry to get out its side of the story.

“I think going forward they need to engage more broadly with the public on what the vision is, not just with this pipeline, but to provide a vision to counter the Keep It In The Ground movement,” he said.

While the energy industry builds its response, the legal battle continues. A federal judge next week is scheduled to hear the tribe’s appeal for an injunction seeking a more longstanding halt to pipeline construction.