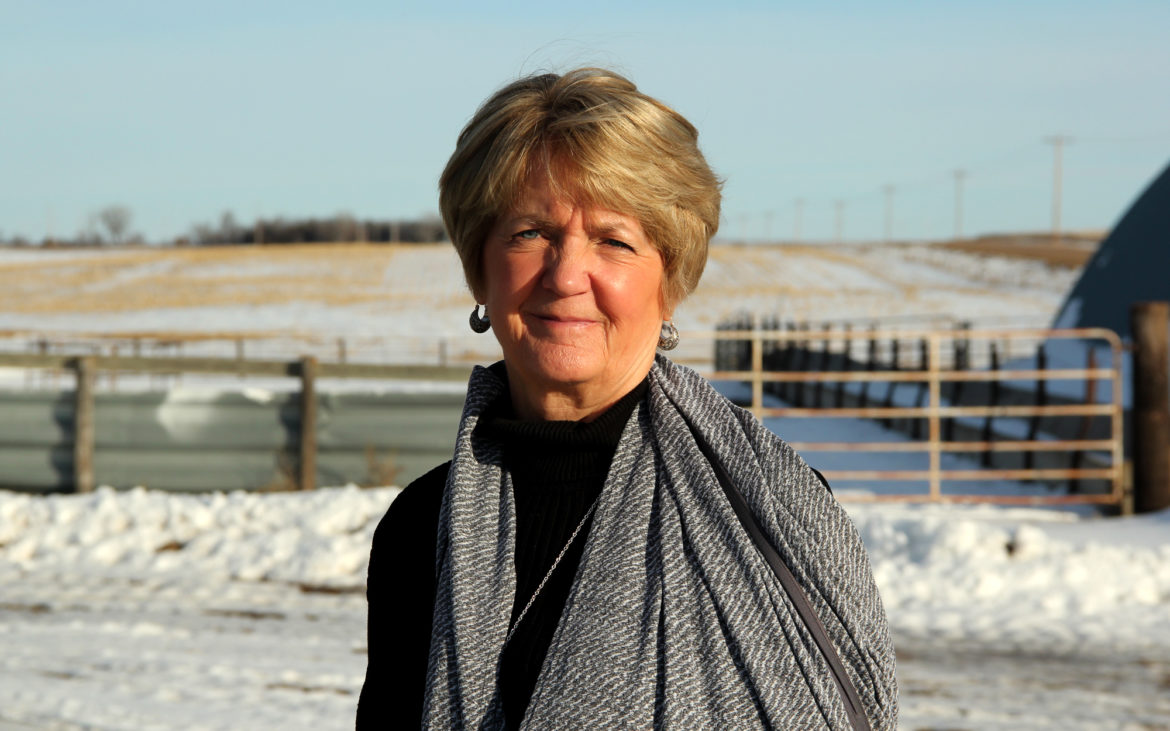 Jeanne Crumly and her husband are part of the fifth generation in their family to farm in Holt County, Nebraska. She is worried that Keystone XL would threaten the water supply their farm depends on.

Jeanne Crumly’s introduction to the Keystone XL oil pipeline came seven years ago. That’s when she learned the 36-inch pipe could someday carry up to 830,000 barrels of heavy crude through her land each day on its way from Hardisty, Alberta, to a pipeline hub at Steele City, Nebraska.

“The pipeline would be about 400 yards north of my house, running through a creek out here where cattle water and where we draw irrigation water,” Crumly says.

President Trump gave new momentum to the controversial pipeline when he directed the State Department to approve the pipeline just days after he assumed office. The final say, however, on whether it is built may lie in the Midwest. Crumly and a group of landowners in a rural part of Nebraska have promised to put a kink in the president’s plans.

Crumly’s family raises cattle and corn in Holt County in north central Nebraska. To provide water for thirsty crops and livestock, they draw from the High Plains Aquifer, an underground reservoir she calls the lifeblood of their operation.

Keystone XL would run through land that lies above that water supply. The company in charge of the project, TransCanada, says pipelines are safer than hauling oil by train and that it will accept the legal responsibility to clean up any potential damage.

“Should an incident occur where there is a release of crude oil into the environment, our focus will be on remediation, repairing the pipeline, and of course restoring the environment back to its original state,” says TransCanada spokesman Terry Cunha.

The company’s first Keystone pipeline, which also runs through Nebraska, has sprung leaks. A defective weld was blamed for a leak of nearly 17,000 gallons of oil from Keystone 1 in South Dakota in April 2016.

For Crumly, an oil leak like that on her land is something she can’t afford.

“For our agricultural purposes, the purity of the water is essential,” Crumly said. “And it’s the thing that probably is driving the resistance.”

When Keystone XL was last up for approval, she and a group of other local landowners sued to block TransCanada from seizing land by eminent domain. In 2015, it looked like that resistance paid off when the Obama White House rejected Keystone XL.

“It was a sweet victory,” Crumly says. “But I’m a realist too. I knew it was a victory but I didn’t believe the battle was over.”

Four days after his inauguration, President Donald Trump revived the project. At a signing ceremony in the Oval Office he issued an executive order directing the U.S. Department of State to approve the pipeline within 60 days. TransCanada submitted a new application to the State Department January 26.

Now, Crumly and dozens of likeminded landowners in this farming and ranching community are reviving their resistance. They gathered at the Community Center in the Holt County seat of O’Neill, Nebraska, recently to talk strategy with other pipeline opponents.

Keystone XL could be approved at the federal level by the end of March. But Jane Kleeb of the anti-pipeline group Bold Alliance, told those at the meeting that TransCanada still must have two things from Nebraska: a route approved by the state’s Public Service Commission, and contracts with all landowners, acquired either voluntarily or through eminent domain.

There will be other stall tactics, including federal lawsuits challenging Trump’s executive order and legal complaints from Indian tribes in South Dakota, but pipeline fighters at the national level say Nebraska landowners could be an important obstacle.

“Keystone XL can’t be built without eminent domain,” says Sara Shor of the climate change activism group 350.org, which opposes the pipeline. “But even after that, landowners are planning further legal challenges. If we stop the route through Nebraska, we stop the pipeline.”

The pipeline does have supporters in Nebraska. Gov. Pete Ricketts has touted the potential construction jobs and tax revenue and many of Crumly’s neighbors in Holt County are on-board for the same reasons. Bill Tielke, chair of the county Board of Supervisors, heard from local pipeline supporters after the board passed a resolution against Keystone XL. To his surprise, a lot of people were upset, because they want the pipeline to be built.

“I had probably more calls with people wondering why we had done the resolution than I ever did on people calling to say to do (the resolution),” Tielke says.

Holt County is in a predominantly conservative part of the state. Voters there chose Republican Donald Trump 8-to-1 over Democrat Hilary Clinton. At the local level, though, Keystone XL doesn’t break along party lines, as it does nationally.

Landowner Jeanne Crumly says the pipeline is like the elephant in the room around town. Both supporters and opponents are entrenched in their views, but they rarely discuss it publicly.

Now Keystone XL is back in the open. Crumly hopes it will get people in Holt County talking about the issue, even if they don’t agree, because their corner of rural Nebraska will have a lot to say about the pipeline’s fate.

This story comes to us from Harvest Public Media, a public media collaboration that reports on food and agriculture in the Midwest.