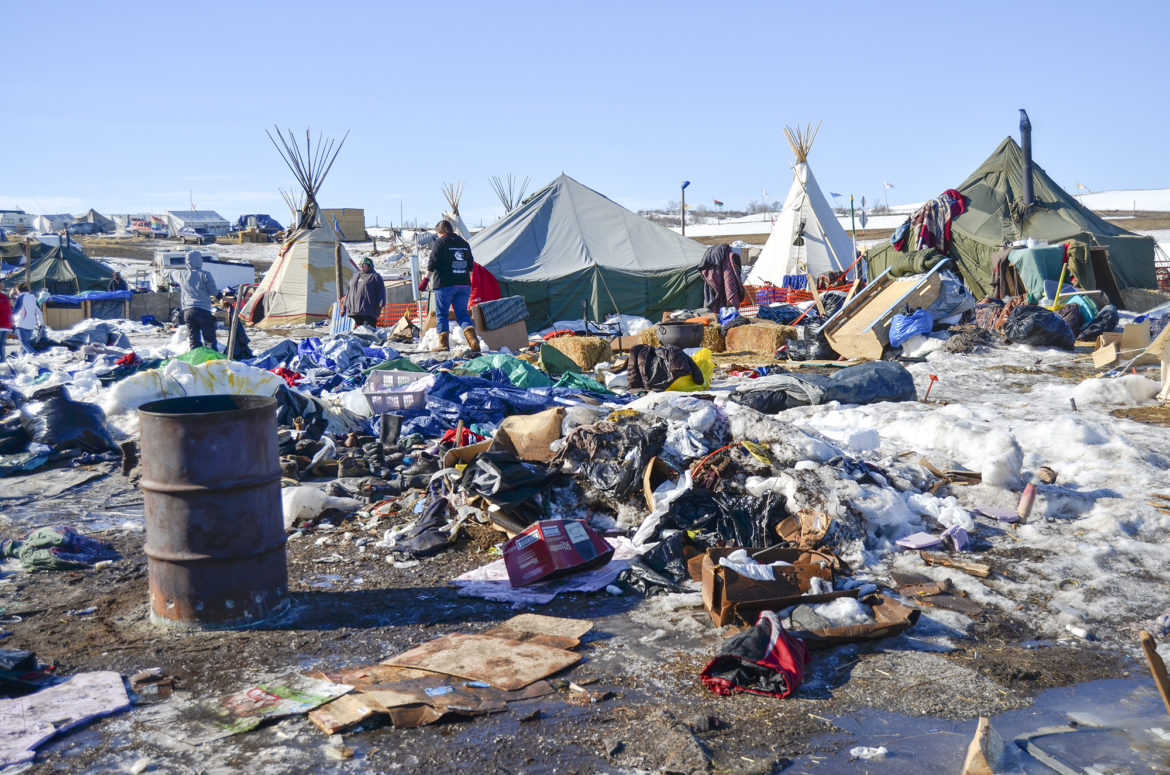 Piles of debris remain at Oceti Sakowin, the main Dakota Access Pipeline protest camp. Some of these items were donated by people who support the movement. Others were abandoned by protesters who left camp.

A massive cleanup effort is underway where thousands of people once lived in a makeshift village on the North Dakota prairie.

Semi trucks haul debris out of the camp that formed here in opposition to the Dakota Access oil pipeline. Construction on the project could wrap up in March, but people are leaving early because this area next to the Missouri River is about to flood. “It looks like a trash pile,” said Dotty Agard, who lives on the Standing Rock Sioux Reservation that borders camp. “But it’s getting picked up, and every spot is starting to look better and better as we work together.”

She sorts through mounds of donated goods, looking to save items for her five children. They lost their home in a fire last year.

“I found a blanket right there and it was about to get thrown away,” she said, pointing to a garbage bag atop the melting ice. “I’m going to keep it.”

Heavy equipment and semi-trucks barrel through. Contractors for the tribe are hauling out waste by the dumpster to disposal sites across the region. A front end loader picks up debris from camp before loading it on a semi to take it to a disposal site.

On a bridge over a tributary near camp, a crew from the U.S. Geological Survey installs a device to monitor the water level that’s expected to rise when the Missouri thaws.

The Army Corps of Engineers and the North Dakota governor say the few hundred protesters who remain have until Wednesday to get out. But not all at camp are concerned about the flood threat, or the looming deadline.

“We’ve been here since August, and we were the first ones here in this camp,” said Clarence Rowland of South Dakota’s Oglala Sioux Tribe. “We’ll probably be the last ones to leave.”

Members of the Sioux Nation claim this land near pipeline construction belongs to them and was illegally seized by the U.S. government more than a century ago.

The Army Corps says protesters are occupying it illegally. The agency wants to clean up the land before it floods. The winter’s heavy snowfall is already causing flooding at camp. Rising water levels from the nearby Missouri and Cannonball rivers will soon follow.

Some protesters are moving to higher ground on the Standing Rock reservation. But it may take law enforcement to forcibly remove those who won’t budge from the camp on Army Corps’ land.

Thirty miles to the north of the camp is the county seat. Cody Schulz is chairman of the Morton County Commission. He is optimistic that the protests will soon disappear. But he expressed concerned that decisions made in Washington could impact what happens in North Dakota.

“They had some hope and a cause,” he said of the protesters last year. “There’s the fear I think from law enforcement that maybe some of that hope may be diminishing and desperation sometimes can set in.”

The Army Corps under the Trump administration granted pipeline company Energy Transfer Partners the final permit it needed to finish construction. Standing Rock is now asking the judge to revoke the pipeline’s permit, on grounds that the federal government scrapped plans for a lengthy environmental study with no reasonable explanation.

While the battle plays out in court, North Dakotans have other priorities. Kay LaCoe of Bismarck is concerned about deteriorating relations between the tribe, state and residents. Dana Yellow Fat of the Standing Rock Sioux Tribe stands in front of the remaining poles of the last teepee that made up Yellow Eagle Camp, a small section of the main protest camp known as Oceti Sakowin.

Back at camp, Standing Rock tribal member Dana Yellow Fat takes a break from dismantling a teepee. The racial tension has soared in recent months, he said.

“People downright hate Indians now,” he said. “You always knew it was there, but now they feel safe in saying it.

He sees hateful comments on Facebook. And he said tribal members are afraid for their safety when they leave the reservation to visit other parts of the state.

“I might have a different skin color than you, but we still both bleed red,” he said. “My culture and my ways might differ from yours, but we can still be friends.”

When the legal battle ends and the protesters leave, the Standing Rock Tribe and North Dakota will have to figure out how to live side by side all over again.