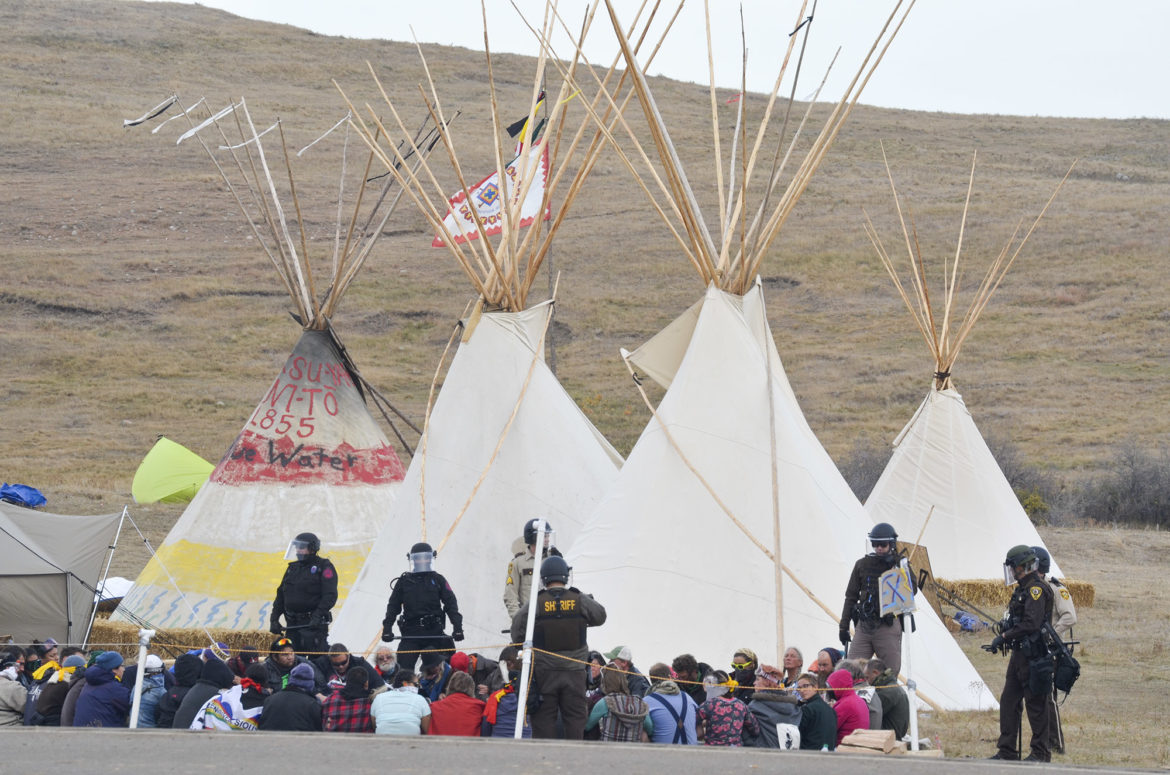 I woke up Wednesday morning to a flurry of messages from people across the country, critical of my story that aired on NPR’s Morning Edition. The piece focused on the cleanup effort at the Dakota Access Pipeline protest camps ahead of the afternoon’s eviction. Listeners took issue with one line: “…there is concern that after months of violent protests, it may take law enforcement to remove those who won’t budge.” This line was used on NPR’s Facebook page to tease my story; hence the heightened attention. My critics’ concern is that I’m implying the protesters alone have been violent, for months on end.

Among the numerous emails, tweets and Facebook comments targeting this part of my story, Inside Energy received this question from a listener:

In a story today (2/22/17) on NPR Amy Sisk said, “…after months of violent protest…” Did the activists protest violently?

I stand by that line, as it is not inaccurate. But I want to offer a deeper explanation, because I did not mean to imply that only protesters have been violent during demonstrations. So too have police, as well as private security for pipeline company Energy Transfer Partners. In hindsight, it would have been more accurate to call the protests violent “at times.”

The protests began in prayer last summer. Many demonstrations that I’ve witnessed since then remained peaceful. Though when protesters trespassed on private property, even those non-violent demonstrations sometimes led to arrests.

But at times, aggressive tactics on the part of protesters — including violence — did occur.

I was not present that day. But I witnessed a frightening scene in November at another demonstration. I watched a line of protesters linked arm in arm, singing, walk through a construction site on a rancher’s land. Suddenly, a pickup truck turned off the highway down the pipeline corridor. I don’t know who was behind the wheel, but the driver hit the gas, attempting to plow through the line of protesters. I filmed from afar, afraid the driver would hit the demonstrators at a high speed, causing serious injury or even death. Fortunately, the protesters jumped out of the way just in time.

Often, the focus on violence during protests involved clashes with police, as happened time and time again this fall and winter. The police have displayed a heavily militarized presence, clad in riot gear and backed up by dozens of humvees. I’ve stood amid crowds of protesters surrounded by officers armed with tear gas, pepper spray, batons and non-lethal bullets. I’ve been fortunate to not get hit myself. Many protesters have not been so lucky. Media, including myself,  have extensively documented the use of force against protesters, and that has prompted intense criticism of police. But here’s the thing: I cannot remain a credible journalist if that is the only side I report. Some protesters — agitators, if you will — have shown aggression toward police. I’ve seen smoldering hay bales, tires and vehicles that protesters lit on fire, trying to create roadblocks so the police couldn’t raid their camps. I’ve listened to law enforcement describe rocks and other items pelted at officers. My coverage reflects this side as well. Protesters burned vehicles and left them on a state highway as a barricade to block out police from their camp during an October confrontation.

In November, I reported a story on a  confrontation that left a young protester, Sophia Wilansky, with a serious injury to her arm. It seems both sides — police and protesters — agree an act of violence led to her injury. But neither side agrees on who perpetrated the violence. Protesters and Wilansky’s father say police threw a concussion grenade at her, which exploded. Police, however, allege that she was likely the victim of a propane canister protesters rigged to explode. So often these sides are at odds with each other, without witnessing it firsthand it’s hard to know which is correct. So as a journalist, I verify as much as I can, and report from all perspectives to give my audience nuanced information to form their own opinion about what happened.

The point of my story was to convey the extensive cleanup effort underway at camp, the looming eviction and the desire among Standing Rock residents to patch up strained relations with neighbors. The closing of the camps is an emotional issue, both for the protesters and people worldwide who have followed their movement. But listeners and readers should not make the one line in my story about violence their only takeaway from my reporting. Please listen to the whole piece (or read it), and I welcome your feedback. You can reach me at asisk@prairiepublic.org.

Meanwhile, Inside Energy reporters are answering your questions about the pipeline. You can check out our responses here, and ask whatever’s on your mind below: