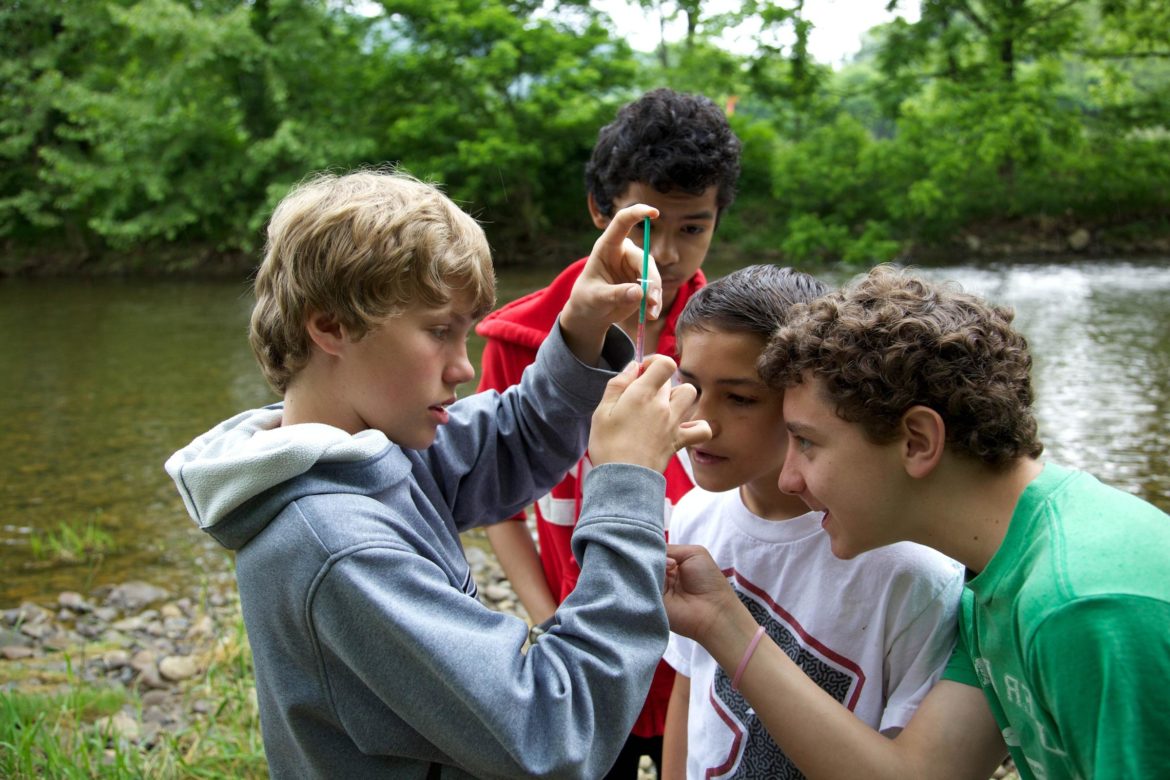 Kids testing water quality as part of a science project in Wyoming.

In 2014, Wyoming’s science standards hadn’t been updated in ten years and it was time to adopt new ones. Like most other states at the time, Wyoming was poised to pass the Next Generation Science Standards. Laramie Senator Chris Rothfuss was a big fan of Next Generation, but he remembered a lot of grumbling from his fellow lawmakers.

“There’s generally been a concern with national standards that the feds are trying to tell us what to learn,” Rothfuss said. “And so there was a general backlash I think towards that.”

Rothfuss said they were worried that they would require teachers to teach that climate change is human caused, a controversial concept in an energy state whose economy depends on fossil fuels. Rothfuss recalled one busy week at legislature. Not many lawmakers noticed when a small footnote was added to the state budget bill. It was small but it packed a wallop.

“People are tired at the end of the day, sometimes things slip through the cracks,” he said. “And that may be one of those pieces of legislation that, if the House had really had a lot of robust debate, might not have passed. But there wasn’t any debate. And it passed.

The footnote defunded the Next Generation Science Standards.

“I think obviously our students need to learn about climate change,” said Goshen County Representative Matt Teeters, one of the sponsors of the footnote, speaking soon after. “But I feel like it was over emphasized, almost activism within the curriculum.”

Rothfuss says the decision created a standoff between the State Board of Education and the legislature.

“The state board of education basically said, well, alright, if you’re taking the best standards we know of off the table, we’re done even talking about standards.”

And so Rothfuss and the late Senator John Patton – as well as the Joint Appropriation Committee – all drafted new bills that repealed the original footnote.

After the footnote was removed, Jillian Balow was elected Superintendent of Public Instruction, having given her word to slow down the process of adopting science standards. Her approach was to go out and get input from Wyomingites.

“Our staff worked incredibly hard going around the state holding listening sessions, collecting input and took over 100 comments to the review committee before the work even started.”

What Balow heard from those comments was that people wanted to mold those Next Generation standards into something uniquely Wyoming.

“We have a science classroom in our own backyard [and] perhaps our students are missing out on the opportunity to learn because of lackluster science standards.”

They wanted to come to a consensus about how to teach climate change, too.

“One of my goals was to make sure that we had great science standards that encouraged students to use the scientific process to determine and deduce factual science,” said Balow.

In other words, let kids use science to make up their own minds about the causes of climate change.

University of Wyoming Geologist and Deputy Director of Wyoming Upscore Sarah Konrad sat on Balow’s science standards task force, and met monthly with parents, teachers and other community members to hammer out these Wyoming-made standards. She says the conversation was often tense.

“Because there’s certain words that get people fired up,” said Konrad. “And we tried to avoid the words that could be controversial. And in changing the words, it wasn’t that we changed the science. Again, we didn’t want to do that. We wanted to make sure we’re really sticking to rigorous science.”

As a glacier expert, solid science was important to Konrad. She takes issue with people who say they do or don’t believe in climate change.

“I mean, what science is, is a process and it’s a system and it’s a method. It’s not a belief.”

Konrad is very worried about how quickly global warming is dwindling Wyoming’s glaciers. But she says the goal of the task force was to find a way to express accurate science so everyone could agree. Nowhere in Wyoming’s science standards does it say humans cause climate change, even though a NASA survey shows 97 percent of scientists agree they do. But Konrad gives an example of how the task force finally did agree to describe the effects of greenhouse gases. They flipped the language, so instead of saying that an increase of the gases causes warming, “we changed the example to say a decrease in greenhouse gases causes a decrease in global temperatures which would cause an increase in glacial ice. Which is exactly true and that’s what happens to start an ice age.”

For one, Laramie science teacher Andy Pannell is glad the science standards took a soft touch.

And, anyway, letting kids make up their own minds came naturally to him.

“I challenge them, don’t believe me. Don’t believe Mr. Pannell. Let’s examine the evidence, then we’ll make some determinations for ourselves.”

Now that’s he’s nearly taught a full year of climate change curriculum, Pannell says the lawmakers who drafted that original footnote had nothing to worry about.

“If the legislators were worried that the energy industry would be demonized by trying to study climate change, I think that actually the opposite has happened,” he said. “I think a lot of the kids have more of an appreciation, that there are just tradeoffs for the way that we do business.”