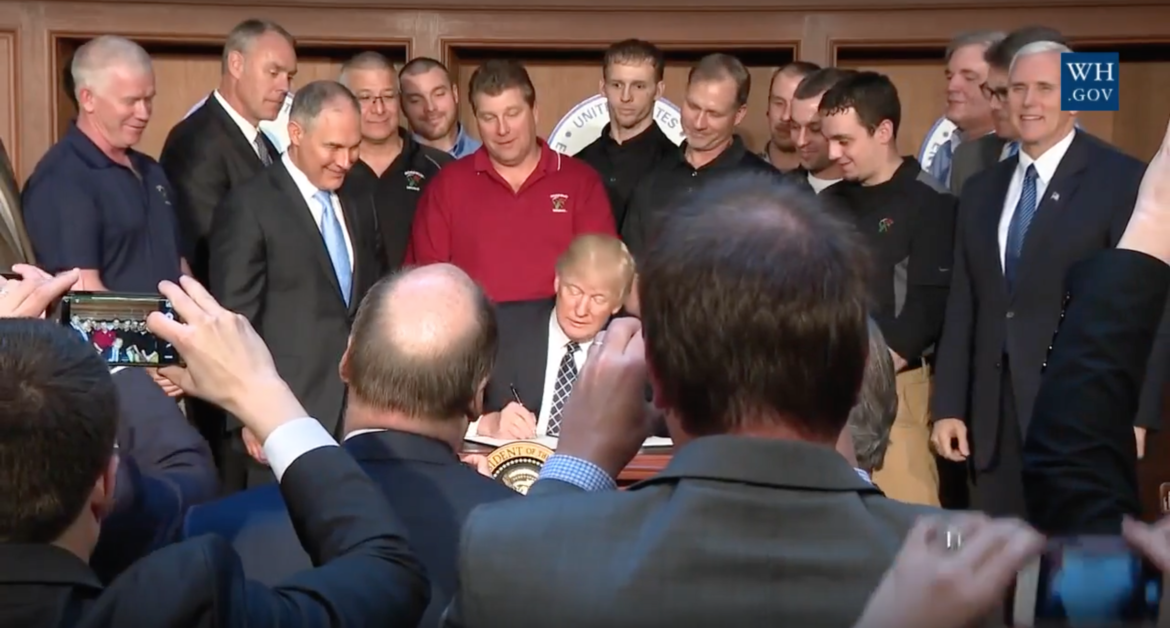 President Trump is directing the Environmental Protection Agency to revise or get rid of the most significant climate regulation of the Obama Administration — the Clean Power Plan. Trump signed an executive order to “suspend, revise, or rescind” the plan at the EPA headquarters Tuesday.

“I am taking historic steps to lift the restrictions on American energy, to reverse government intrusion and to cancel job killing regulations,” Trump said, surrounded by members of his cabinet and a group of coal miners.

The Clean Power Plan required the country’s power sector to cut carbon emissions about a third by 2030. Fossil fuel industry and utility groups lambasted the plan, and 27 states sued it as unconstitutional federal overreach. For North Dakota, the plan was asking too much too fast.

“Well, I expect them to give us some breathing room,” said David Glatt with the North Dakota Department of Health, the agency is responsible for enforcing the plan in the state.

But, it’s not being enforced right now anyway — because it’s held up in court.

If the Clean Power Plan does survive the legal challenge, Trump’s executive order doesn’t change anything with the plan right away. For the EPA to revise or rescind the plan, it will have to go through the same formal process that produced the original rule, and they’ll have to justify reaching the opposite conclusion was reached under Obama. The EPA will also have to go through public comment periods and other procedures that can take years.

Still, Glatt expects Trump’s order will eventually unwind the mandate for rapid change, but said the state is moving in that direction anyway.

“Not saying hell no to everything,” he said, “but do it in a way that we feel can be done with a little common sense and (that) doesn’t adversely harm the economy.”

Another part of the President’s Executive Order does take effect immediately:  lifting an Obama moratorium on leasing coal on federal public lands.

“So, it’s a lengthy process for BLM to consider all of the factors related to each lease,” he said.

One important factor — coal demand is way down and new coal leases may not make economic sense.

Still, for the President, the order appears to fulfill campaign promises to put coal miners back to work.

“Basically, you know what this says?” Trump asked to the coal miners gathering around him as he signed the executive order. “You’re going back to work.”

Not so fast.  Most experts are skeptical this new order will result in many new coal jobs in the short term, as those jobs face bigger threats from automation and cheap natural gas than they do from federal regulation. Environmental groups are also threatening lawsuits of their own to prevent this dismantling of the Clean Power Plan. And a group of 23 states and cities, including California, Washington D.C. and Boulder, Colorado, were quick to release a statement opposing Trump’s new order, saying it ignores the importance of confronting the real threat of climate change.