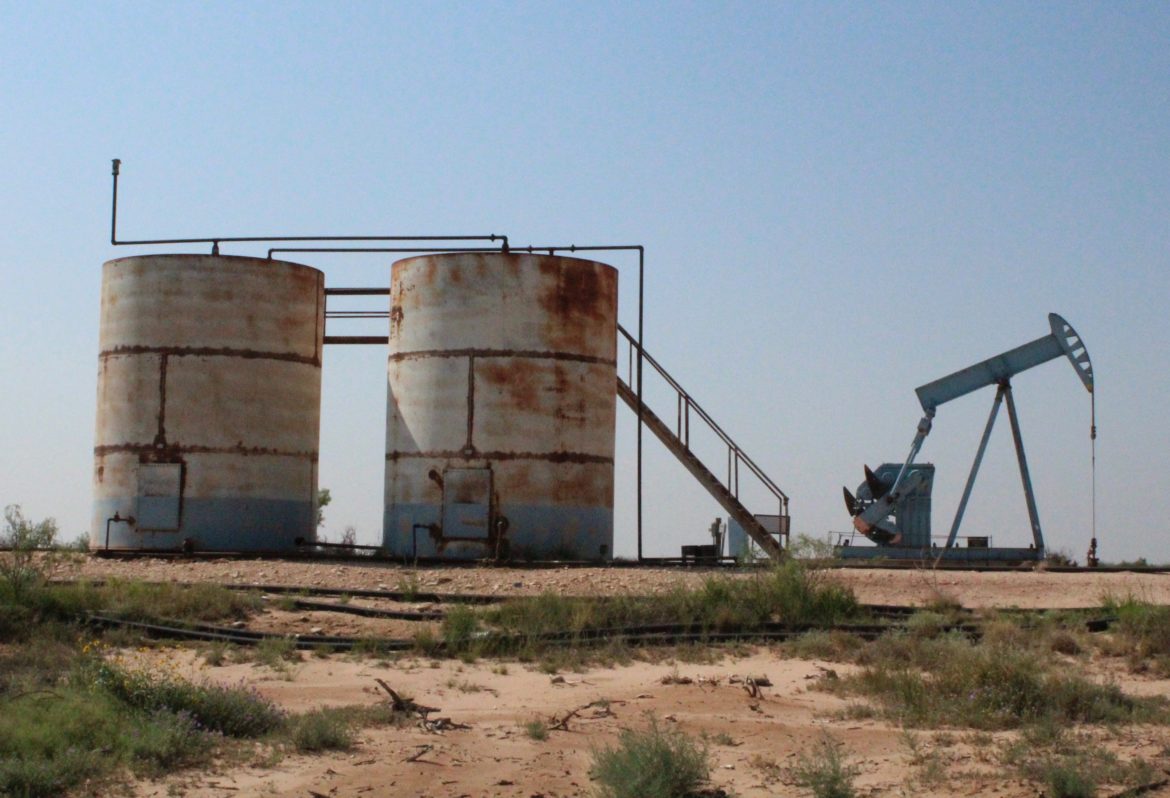 Tank batteries and a pumpjack at an isolated spot in the Permian near Midland, Texas. The Permian has experienced a rash of oil thefts from batteries such as this one in recent months.

Oil drilling and production in the many parts of the country is booming again. But in the Permian Basin of west Texas, the boom has a byproduct that producers are considerably less excited about: oil theft. The Houston-based Energy Security Council estimates that this year alone, Texas companies will lose between 10 to 30 million barrels of oil to theft, a revenue loss of $450 million to nearly $1.5 billion at today’s prices.

He sells everything, from whole electric drilling rigs all the way down to their bits and pieces.

Recently, he’s been getting cold calls from oilfield security companies trying to sell him software and cameras. Weiss was robbed in early June.

“You can see what’s left of the generators that they took the copper out of,” he says. “Hope we catch ‘em.” A generator at Fred Weiss’ oil equipment yard, cordoned off with police tape after thieves made off with all the copper wiring.

From from Weiss’s storage yard, the generator looks like a shipping container lined in caution tape. Inside, there’s an engine with a tangle of cables hanging from the ceiling.

Oilfield security is big business in the Permian Basin, and not just in the private sector. There’s an FBI-led Task Force headquartered in Midland, solely dedicated to investigating cases of oilfield theft. Special Agent Andrea Simmons coordinates the task force from the 6th floor of a downtown plaza building. Oil and gas infrastructure is visible on the horizon out the office window.

“You’re always going to have theft. It doesn’t matter whether things are booming or not,” she says.

Copper vandalism has been a problem in the Permian since the task force began in 2008. But more recently, a rash of oil thefts has become a bigger issue for local law enforcement. And disappearing oil is harder to track than materials or equipment. Simmons says that when there’s a boom, it’s more difficult for oil companies to notice theft when it’s happening.

“There’s so much going on, so much inventory going in and and out, that they don’t always observe the losses as quickly as they do in a downturn,” she says.

Over the span of one month this spring, companies in Midland and Reeves counties in West Texas reported more more than 3200 barrels of oil stolen, worth around $160,000 based on a $50-a-barrel value. That’s compared to zero reports of oil theft to the FBI office in the previous year.

Midland County Sergeant John Henry is one of 3 local deputies on the task force. At a drilling lease located off a dirt road he patrols regularly, there’s a pumpjack and a couple of old tank batteries, which store the oil being pumped out of a nearby well. He knows this tank has been tapped by thieves in the past. We can’t use the name of the oil company – most producers don’t want the fact that they’ve experienced theft publicized. Henry says this last spike of oil thefts was the most significant he’s seen since joining the task force 4 and a half years ago. That makes him think the incidents were related and well organized.

Here’s how it often works: oil truck drivers attach a load line – a hose – to the tank battery and suck out up to nearly 200 barrels of oil. They find an intermediate site to store the oil, and partner with the owner of another well that isn’t producing much. That owner gets the oil back into the pipeline system and registered with Texas oil regulators at the Railroad Commission, which makes the oil legitimate.

Another common scheme involves saltwater disposal plants – where wastewater from oil production is processed. It’s legal for wastewater operators to sell the excess oil they skim off the top of their water. But operators that steal oil will shuffle their paperwork, and mix stolen oilinto the skim for a bigger profit.

Sergeant Henry says that petroleum theft is really difficult to prove. The task force has 10 open investigations ongoing, but the last successful prosecution in the area was in early 2015.

“Law enforcement can’t be everywhere,” he says. “They can’t put cameras everywhere. It’s such a wide area. Midland is about 960 square miles and a lot of that is oilfield.”

Witnesses are hard to come by in oil theft investigations, so getting folks who were in on the scheme to talk is key. A bill passed by Texas lawmakers this legislative session to increase penalties might make that easier. The hope is felony charges will spur more plea deals and more cooperation from insiders.

Law enforcement says oilfield theft happens all the time. Major oil companies might not suffer much from tens of thousands of dollars in oil stolen here, or copper wire or a generator stolen there. But the smaller producers and business owners like Fred Weiss back in Odessa feel every penny.