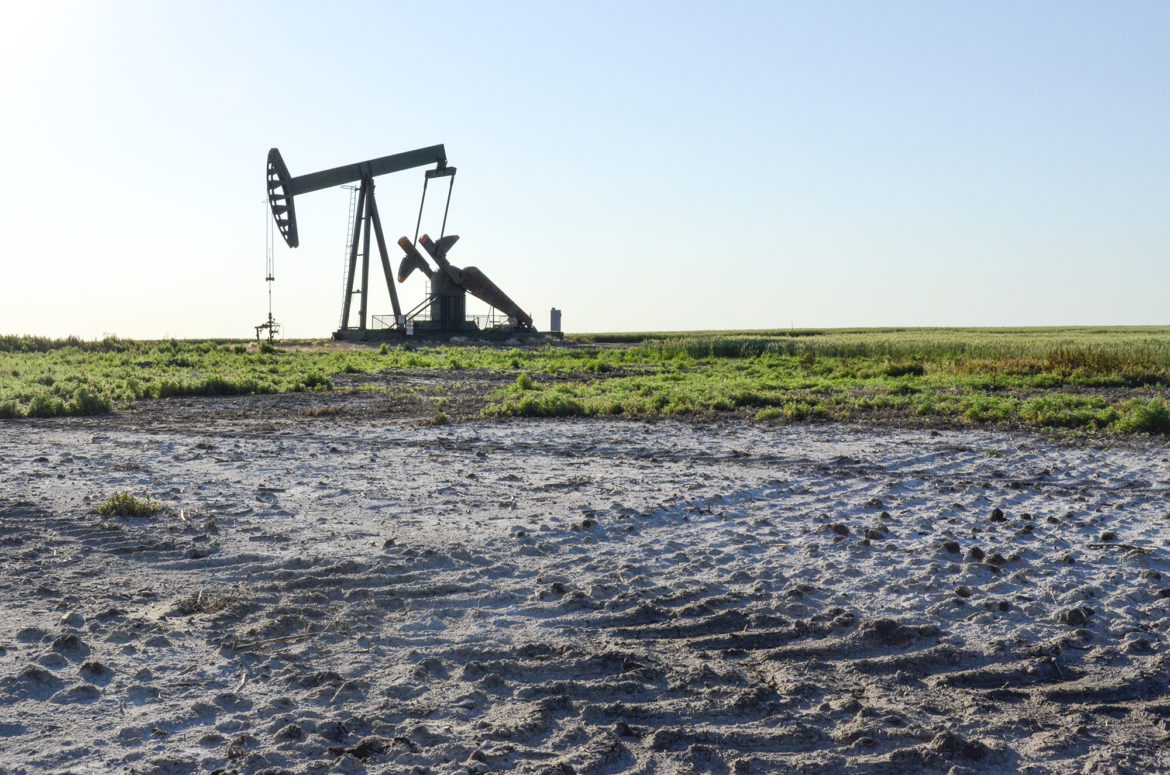 Salty wastewater from pumpjacks like this one near Glenburn, North Dakota, used to be dumped into pits on farmers' land. Over the years, the brine seeped into the surrounding fields. The resulting contamination continues to expand decades later.

Way up in northern North Dakota lies an old oilfield with a problem 60 years in the making.

It’s noticeable on farmers’ land, like the fields harvested by Clarke Stevens near the small town of Glenburn.

His wheat fields span far across the prairie. In the middle is a 3-acre patch of barren soil.

“We’re always farming around areas like this, and every year they continue to grow,” Stevens said. Though filled with weeds today, this old pit near Glenburn, North Dakota, used to contain salty wastewater from nearby oil wells. The brine sat in this pit to evaporate, but over the years it seeped into neighboring land, making the soil there infertile.

This is the site of an old brine pit. Decades ago, trucks took this salty wastewater — produced alongside oil from nearby wells — and dumped it into this pit.

The state condemned these so-called “legacy brine pits” in the 1980s, but they were never cleaned up. Over the years, the brine seeped deeper into the soil and migrated into nearby fields, damaging more land along the way.

“Because of the size of these pits and how big they have grown because of the salt contamination, we are talking possibly up to 5 acres or even more on some of these sites,” said Cody VanderBusch, reclamation supervisor for the North Dakota Department of Mineral Resources’ Oil and Gas Division.

He sees an opportunity in this toxic legacy to address ongoing problems with brine spills. Hundreds of millions of barrels of wastewater are still produced each year in North Dakota’s oil country.

The difference today is once the brine comes to the earth’s surface, it injected back underground. But spills are common with pipelines and disposal sites.

The state is starting to look into this problem. Lawmakers, prodded by landowners, set money aside for research the past two legislative sessions. This spring, they designated $5 million toward the issue.

Ultimately, clean up of these sites could cost hundreds of millions of dollars, with the bulk of that bill potentially falling to the state.

There are a lot of questions to answer.

First, how many of these pits exist? The state estimates 120 but doesn’t know for sure. Then, were farmers ever compensated? And what clean-up techniques will actually work?

Rangeland specialist Kevin Sedivec with the North Dakota State University Extension Service stands amid a 3-acre patch of weeds and salt-contaminated land near Glenburn, North Dakota. He’s trying to figure out a way to get grasses growing here again near the site of an old oilfield wastewater pit.

One of the people trying to figure this out is Kevin Sedivec, a rangeland specialist with the North Dakota State University Extension Service. He’s one of several researchers in the state working on developing ways to clean up the pits, and he’s focusing on the one at Stevens’s farm.

“They’re just an eyesore,” he said.

In the middle of this contaminated patch, it’s so salty, not even weeds will grow.

“They basically starve to death of water,” he said. “The plant dies of dehydration.”

This salt isn’t just sprinkled atop the ground — it has seeped down and is now at least a couple of feet deep, bound to soil particles.

Sedivec is searching for a cheap solution to get this area productive once again. Not everything he’s tried has worked.

What’s most promising is gypsum. It’s a calcium-based powder that binds to the salt, and it’s applied with a layer of compost. A good rain draws the calcium and salt deeper into the soil, leaving enough room for the grass’s roots to grow. A plug of western wheatgrass is still alive in a trial to clean up a brine-contaminated field near Glenburn, North Dakota. Researchers hope that by applying gypsum to the salty soil and planting grasses in the area, they can re-establish vegetation for grazing, hay or wildlife habitat.

Two-thirds of the grasses in this gypsum trial are still alive.

“We at least created a crop we could either graze or we could hay for hay production or we can provide a wildlife habitat,” Sedivec said.

The soil’s still too salty for crops like wheat, barley or soybeans. Sedivec hopes to address that with more research.

The head of a group pushing the Legislature to deal with this issue has faith in the process.

“There’s people out there, there’s smart people that will start doing some different research and testing, and somebody will come up with something,” said Troy Coons, chairman of the Northwest Landowners Association.

Some of the members of the landowners group have these old pits on their land. Others deal with recent brine spills — whether in the Bakken oil fields or in the north-central part of the state near communities like Glenburn.

It all boils down to this for landowners and farmers like Stevens: One day, maybe their fields will look whole again for the first time in decades.

“Anything you can do to get the land productive again,” Stevens said. “You want to leave it for the next generation better than you had it.”