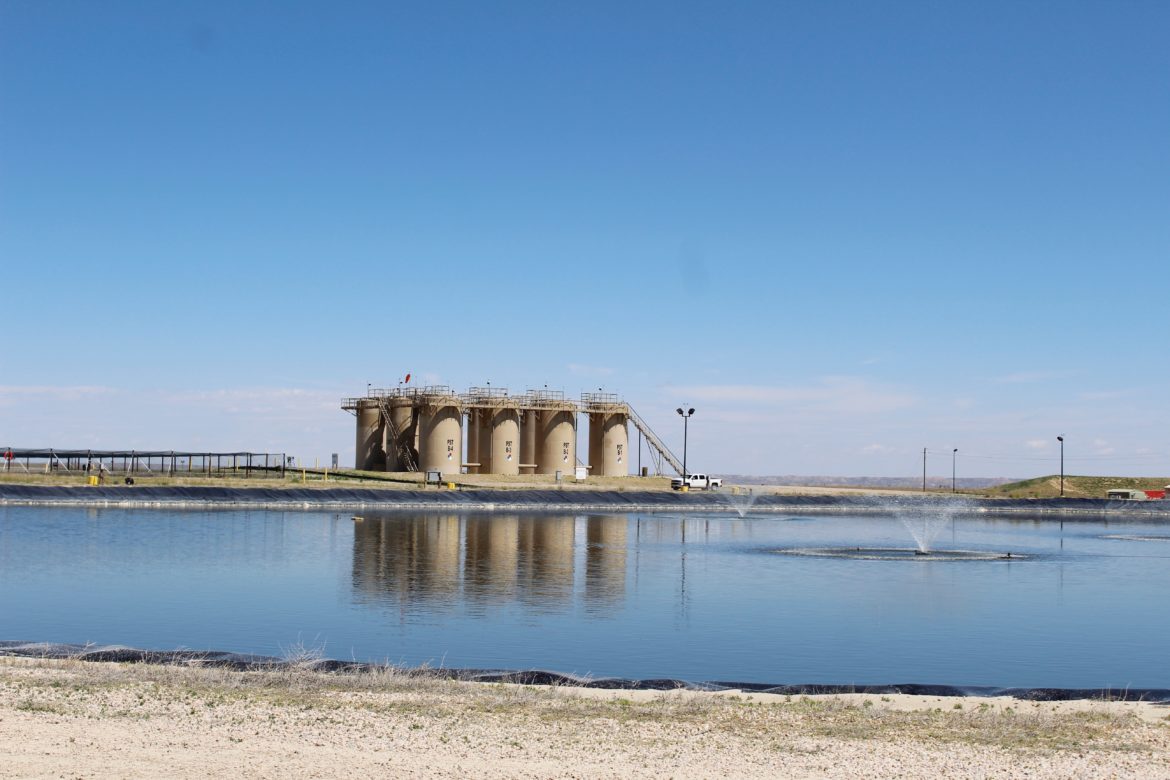 Millions of gallons of salty wastewater are produced each day wherever there’s oil and gas production. Most states inject wastewater deep underground.  In Wyoming, above-ground wastewater ponds are still used.

They aren’t what people would expect, though — especially the fountains. A little larger and they’d be perfect to put in front of Las Vegas casino, fanning out in all directions.

The fountains aren’t just for looks, though. They help evaporate the water and hold off bacteria, keeping the smell down.

“And when we come out here, you’ll smell a little bit of odor coming off of these ponds, the produced water odor, but it’s not that strong,” Jerry Hamel, manager of wastewater pond facility Grasslands Environmental, said on a tour of his facility. “What’s a better place for me to protect the environment than within the industry to ensure that we are taking care of it,” he said.

Driving around Grassland’s landfill, he stops to show how his operations try to protect wildlife. We see a small bird, a mother killdeer, waddling in front of us, trying to distract us away from her nest. Hamel points out the passenger window.

“That dark grey and that little bit of green. Its those dark grey rocks. There’s a nest right square in the middle of them,” he said.

After a few long seconds of scanning, I spot them. They’re nearly invisible in the gravel. Killdeer eggs blend into the gravel at Grasslands Environmental.

Hamel said he found bird nests all around the facility and sometimes he has to work around them. He sees deer, antelope and turkeys, too, and keeps an eye out for them.

Not all of Wyoming’s 35 permitted commercial ponds are required to pay this bond, though. Eleven older ponds were permitted before 1989. There was no bond requirement back then, and the older ponds were grandfathered into the current regulations. If those companies go under, taxpayers could be stuck with a cleanup bill of between 7 and 9 million dollars total.

It happened in the past. One commercial wastewater pond in Sublette County, Wyoming, had to be remediated by the state at a cost of $750,000.

Regulators are now hoping to make sure that doesn’t happen again. Earlier this summer, the state Water and Waste Advisory Board voted to require bonds on the older ponds.  Hamel is supportive, saying his company has already gone above and beyond state regs to make sure the area stays clean and protects the environment.

“The majority of facilities don’t have the level of protection that Grasslands does: it came at a cost,” he said. “This facility cost about 3 times what comparable facilities that can handle this much water cost to build.”

But the new bonds are not good news for pond owner Dennis Lawrence.

“The bottom line is, we don’t have the money, we’re not in operation. Our corporation has no money,” Lawrence said in his Buffalo office.

Lawrence is co-owner of the Parkman Reservoir, an older wastewater pond in northeast Wyoming that is currently unbonded. He says he’s been fighting legal battles and paying fines over the years as regulations changed — his berms were too low, his netting inadequate.

One dispute saddled him with a bill of more than $240,000 from the Environmental Protection Agency. The agency noted that contaminants like oil had made their way into his open-air evaporation pond, making for a quote “Imminent threat to the environment.”

If the state starts requiring additional financial assurances, Lawrence said he won’t be able to pay.

“I know it sits back there, don’t have the final solution. I’ve lost many sleepless nights worrying about being fined, being done whatever, going back to court again. It’s not a pleasant experience,” he said.

The regulation is not yet a done deal, and Keith Guille of the Wyoming Department of Environmental Quality wants companies to come forward in the meantime if they have concerns.

“We believe that natural resources, the environment and the industry itself can co-exist. And that’s why we have these rules and regulations,” he said.

Given the huge volumes of wastewater produced, cleanup and management is a challenge for all states involved in oil and gas production. Ponds are problematic, but so are injection wells which have been proven, in Texas and Oklahoma, to be linked to earthquakes. The latest trend?  Finding cost-effective ways to recycle and reuse the wastewater.