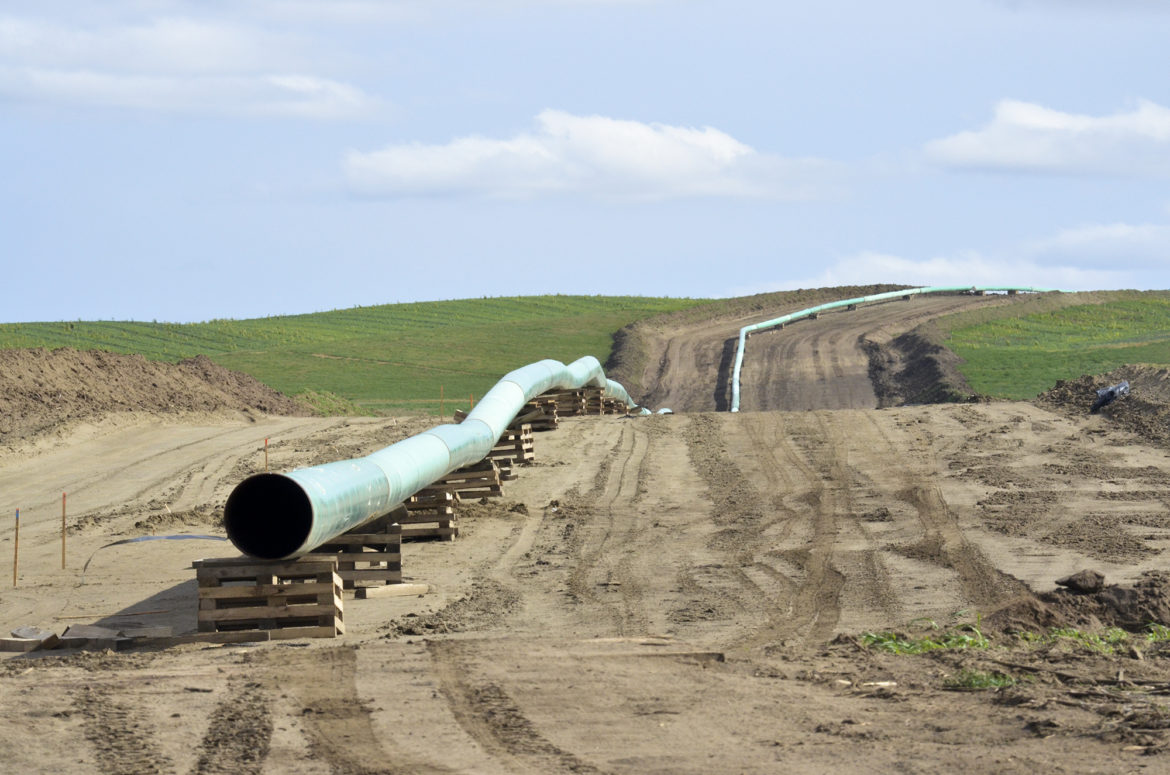 A segment of the Dakota Access Pipeline waits to be buried last year in Morton County, North Dakota.

After months of protest, legal wrangling and stalled construction, the Dakota Access Pipeline is up and running — and transforming how oil leaves North Dakota.

The pipeline became operational June 1, offering North Dakota for the first time more than enough room to carry its oil to market on pipelines.

Before Dakota Access came online this spring, trains were still carrying a significant amount, about 25 percent. But in just the line’s first month, that number dropped way off, down to just 7 percent. The rest is either refined in state or trucked to Canada.

These numbers offer a first glance at how this major pipeline is rapidly upending the transportation sector of the oil industry, and it’s impact has only just begun.

“When a new pipeline system typically goes into service, they do not operate at full capacity initially,” said Justin Kringstad, director of the North Dakota Pipeline Authority.

So the numbers could change even more down the road as Dakota Access builds up to carry 500,000 barrels per day to Illinois, where that oil will be taken on additional pipelines to the Gulf Coast.

“I don’t anticipate us being at full capacity with Dakota Access for quite some time, whether that’s 3 months, 6 months,” Kringstad said.

This single pipeline will soon carry half the state’s daily oil production, which isn’t showing any sign of slowing down despite stagnant oil prices. The number of rigs drilling for oil in North Dakota has climbed to nearly 60 in recent months.

“Based on the field data coming in, it looks like we’re going to stay above that million barrels a day,” he said.

A lot of that crude will go through Dakota Access.

When the shale fracking boom started a decade ago, North Dakota didn’t have much in the way of pipelines to get oil to market. Back in 2014 when rail reached its peak, roughly 11 oil trains left North Dakota each day.

This proved a more costly — and arguably more dangerous — method of transportation.

And it’s more than just rail that’s affected by Dakota Access, he said.

“The pipeline companies are definitely competing, not only against rail but also against each other for market share,” he said.

The other existing pipelines leaving North Dakota carry Bakken crude to the Great Lakes, and to Oklahoma via terminals in Wyoming.

Kringstad said he expects those lines this summer will carry 10 to 20 percent less oil than they have in the past, as some producers opt now to send their oil through Dakota Access.

While the industry adapts to these changes, Kringstad says companies are already mulling what the future has in store for transporting North Dakota’s vast oil reserves.

“The expectation is that production will again exceed the pipeline capacity,” he said.

His projections show that could happen by the mid-2020s.

“We’re going to be looking at a situation of additional transportation needs out of the region,” he said. “Whether that’s met by a new pipeline project, an expanded pipeline or the use of rail, the market will decide that going forward.”

“It takes typically 3 to 5-plus years to put together any sizeable type of pipeline project,” he said.

If operators and pipeline companies are eyeing the Bakken, thinking about projects down the road, they are likely looking for ways to avoid the massive protests that stalled Dakota Access.

That pipeline still has one final legal hurdle to clear. A judge could decide to shut the line down while the federal government revisits parts of its environmental analysis done during the permitting process.

The various parties — the Standing Rock Sioux and other tribes, along with the Army Corps of Engineers and pipeline developer Energy Transfer Partners — are embroiled in a court battle over whether a shutdown’s necessary.

But in the meantime, oil companies are breathing a sigh of relief that the pipeline’s operational, as they absorb the ripple effects it’s sending throughout the industry.