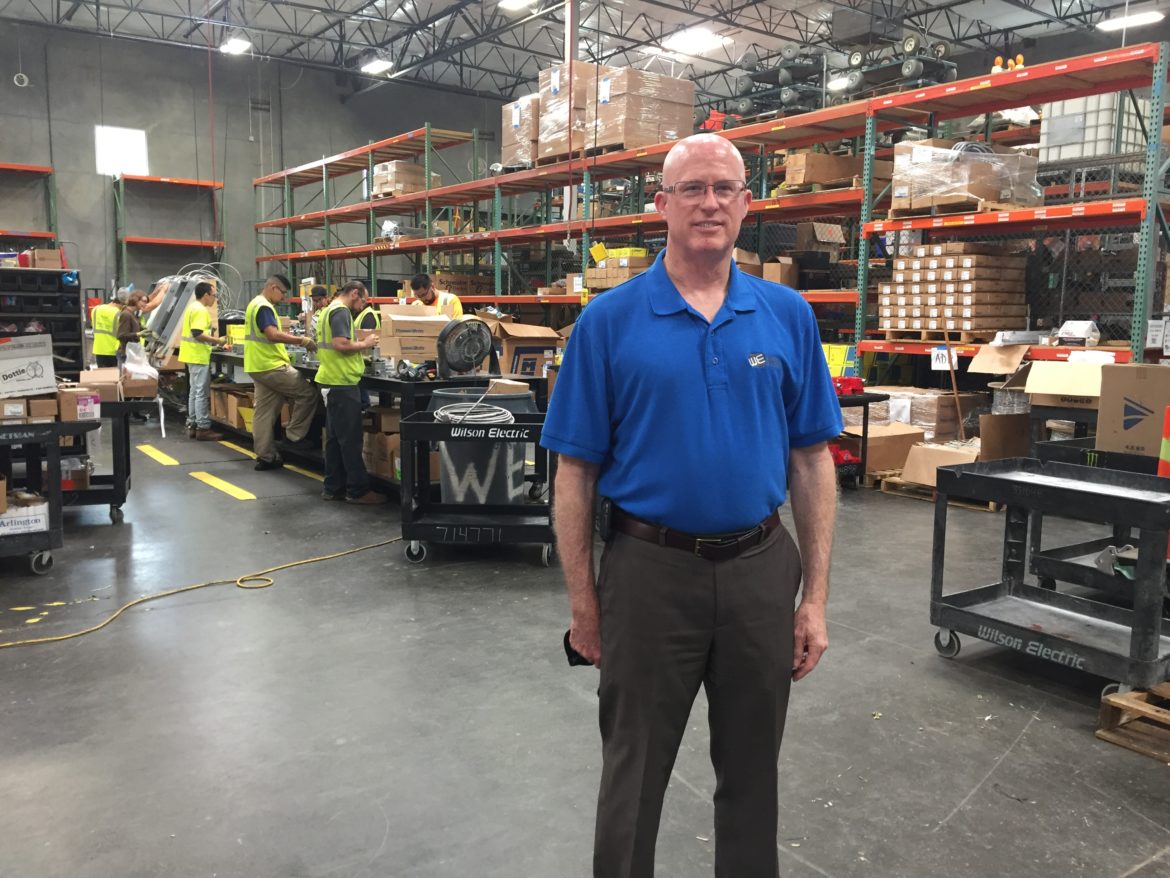 Mark Holohan, solar division manager at Wilson Electric, stands in his company's warehouse outside Phoenix, AZ. Across the country, solar installers say a proposed tariff could sink their business model. Meanwhile, several solar manufacturers say they need shelter from an oversupply of cheap panels made overseas.

Before a solar project, Mark Holohan usually gives his customers plenty of time to mull over the cost — except lately that’s been difficult.

“We have a sort of panic buying mode in the marketplace right now. Inventories have fallen. Availability has decreased. Prices have risen,” Holohan, the solar division manager at Wilson Electric, recounted over the clatter of machines and workers on the floor of a warehouse in Tempe, AZ.

“We used to have product sitting in warehouse that could be shipped in a shorter amount of time. Now we are waiting for another batch to be manufactured,” he said.

That means his company can’t hold a price too long because the math could change overnight. Solar panels are flying off the shelves.

Holohan understands why other installers are in such a rush.

“There’s a threat of a very large price hike looming if the total request on the trade case is granted and so that makes life very difficult for us,” he said.

Others in the industry have been less measured when describing the possible fallout of a solar trade case currently in front of the U. S. International Trade Commission (ITC).

The Solar Energy Industries Association (SEIA), an industry trade group, is calling the matter an “existential threat” that could almost immediately result in the loss of a third of all solar jobs.

Like many installers, Holohan has relied on a cheap, plentiful supply of solar panels made overseas, mostly in China and Asia. Those low prices have helped solar compete with traditional sources of energy like fossil fuels and grow its workforce to nearly a quarter of a million jobs. Last year, the U.S. installed nearly twice as much solar as in the year before. Southwest states like Arizona and Nevada are some of the top markets.

But some domestic makers of solar panels believe that boom has come at their expense.

At the center of the trade dispute are U.S. based manufacturers Suniva and SolarWorld. The companies argue the glut of inexpensive imports, specifically crystalline silicon cells and modules, has dealt “serious injury” to the U.S solar manufacturing industry. They’ve petitioned the ITC to impose steep tariffs on all foreign imports of that equipment.

“But unfortunately it can’t compete with foreign governments, foreign dumping and subsidies and a global surge of imports, and they shouldn’t have to,” Brightbill said.

In fact, SolarWorld successfully pushed for tariffs on Chinese imports in 2012, but Brightbill said those safeguards have not solved the problem. Chinese manufacturers have managed to evade much of the tariffs by shifting manufacturing to other countries. As a result, Suniva and SolarWorld have turned to Section 201 of the Trade Act of 1974. It’s a provision designed to give temporary relief to an industry that has suffered serious injury because of increased imports.

The decision would not, however, apply to just a few countries, but rather all panels made anywhere in the world.

“If you lose the manufacturing, then all the innovation, all the know-how, all the investment will go overseas,” Brightbill said.

He cited a study conducted by Mayer Brown, the firm representing Suniva, that a tariff could actually result in an increase of more than 140,000 jobs, many of those in manufacturing.

The “injury phase” of the case kicked off on August 15 with an all-day hearing that pitted much of the solar industry against the two manufacturing companies.

The ITC has until mid-September to decide whether to let the case go forward. If it does, the final arbiter will be President Donald Trump.

“I don’t see any incentive for him based on his past positions to oppose a safeguard measure. It’s classic bad politics. It’s a short term fix that ignores the long term problem.”

Fellmeth cites Trump’s criticism of NAFTA, support for U.S. manufacturing and fossil fuels. But he predicts that move may backfire: “There is no example in history of an industry that has prospered in the long run thanks to a safeguard measures.”

He said consumers will pay more for solar and the ultimate impacts of a blanket tariff won’t be confined to the solar industry either. Countries will try to recoup their losses by imposing duties on other U.S. exports, he said.

“You pluck one strand from the web and it may weaken the entire web,” Fellmeth said. “From a simplistic view, it sounds like it is protecting jobs, but any kind of deeper analysis will lead you to conclude that this kind of action has negative reverberations.”

Other sectors of solar manufacturing will suffer too, said Jeff Spies, head of policy at Quick Mount PV, which is based in California and makes equipment to mount solar panels.

“If the intention is to defend U.S. manufacturing, the decision is clear: dismiss this case with no penalties,” Spies said.

The solar supply chain already had 35,000 thousand existing manufacturing jobs, but Spies said those are at risk if the U.S. puts in place the proposed tariffs.

“I can’t even think of anything that comes close to the threat that we see with this particular trade case,” Spies said, “90,000 jobs lost in any other industry would have a lot of politicians freaking out.”

That appears to be happening. A coalition of senators from states like California, Kansas and Nevada recently sent a letter opposing the trade protections. A number of conservative free market groups like the Heritage Foundation and the American Legislative Exchange Council (ALEC) also came out in opposition to the move.

What makes this trade case especially infuriating to many in the solar industry? The two companies asking for the tariffs aren’t even “all American.”

SolarWorld is the subsidiary of a German company, which recently declared insolvency and fired workers from its Oregon-based plant. Founded in Georgia, Suniva declared bankruptcy earlier this year and is majority owned by a Chinese firm.

“While they have manufacturing here, they aren’t even headquartered here,” he said, “It’s definitely a world market we are dealing with.”