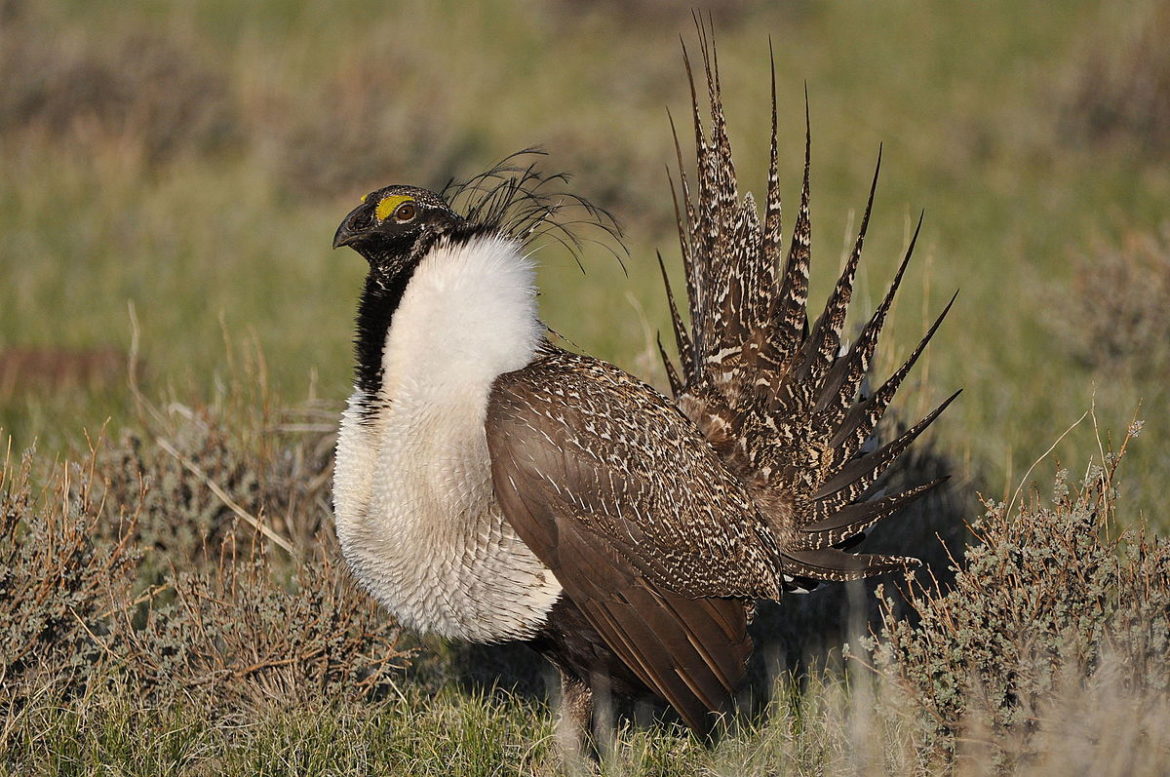 A greater sage-grouse male struts at a lek (dancing or mating ground) near Bridgeport, CA to attract a mate. Energy companies, environmentalists, ranchers and government officials are getting back together at meetings across the west this fall to talk about the fate of a chicken-like bird called the Greater Sage Grouse.

Many of these so-called stakeholders have sat at this table before. The well-being of the Sage Grouse was the focus of a hard-fought compromise among 11 states, finalized just a few years ago.

“I think it was extraordinary and a word that is often used is epic collaboration,” Sarah Greenburger, a sage grouse advisor at the Interior Department at the time, said.

In Sept. 2015, Interior Secretary Sally Jewell announced to a round of applause at a press conference outside of Denver, that the bird would not be listed:

“The U.S. Fish & Wildlife Service has concluded that the Greater Sage Grouse does not need protection under the Endangered Species Act.”

The Bird is Back

Now, a new Interior Department under Ryan Zinke is asking for changes to those plans, recommending a new policy on energy development in sage grouse habitat and giving states more say in how they protect the bird.

“Here was a situation where it might have been easier to fight, but people chose to work together. If that gets torn down by a small set of interests who didn’t get everything they wanted, I think it’s really disheartening to all of those people who worked so hard to get to that success. And it really calls into question going forward whether people decide to invest that kind of time and commitment into those kinds of solutions,” Greenburger said.

President Trump formally prioritized energy development with a directive issued in March, ordering a review of existing regulations that potentially burden energy development.  Since then, his agencies have reviewed national monuments, environmental regulations and the sage grouse conservation plans. Stakeholders are now returning to the table to re-negotiate protections for the sage grouse. In Wyoming, the first meeting was earlier this month. Most of the 30 people who attended – members of Wyoming’s Sage Grouse Implementation Team – were uncertain about how changing these plans would actually work. There are 98 different plans, representing states broken up into micro-regions.

“I think some of these things are topics that are moving all over the place — they are moving targets. That’s frustrating as you can imagine for us … but I think we need to have a pretty robust conversation about a couple of these items,” Bob Budd, chairman of Wyoming’s Implementation Team, said.

Once numbering in the millions, the Greater Sage Grouse population has dropped range-wide this past century to below 500,000.

In Wyoming, the stakes around conserving this bird are particularly high. Nearly 70 percent of the state is considered sage grouse habitat. Much of that land is also used for ranching, oil and gas development, and wind production. Total economic output from all the activity in those areas adds up to more than a quarter of the state’s economy, according to a study by the University of Wyoming.

Some team members applauded Interior’s efforts to improve the plan.“In the past, the Obama administration put up roadblocks against development, and this administration wants to take those roadblocks down without harming the environment,” Diemer True of Diamond Oil and Gas said during the meeting.

Others on the implementation team were not so pleased. Joy Bannon with the Wyoming Wildlife Federation said these stakeholders all had a say the first time around.

“We’ve already gone through all of the details that needed to be in the plans — we worked tirelessly on those specific pieces, and to re-open that door just feels like all the work we did is not being considered as worthy,” Bannon said.

Worthy or not, the grand compromise of 2015 was successful in keeping the Greater Sage Grouse off the endangered species list. The question for all these stakeholders now is if future plans can do the same. The bird will get its next check-up in 2020.