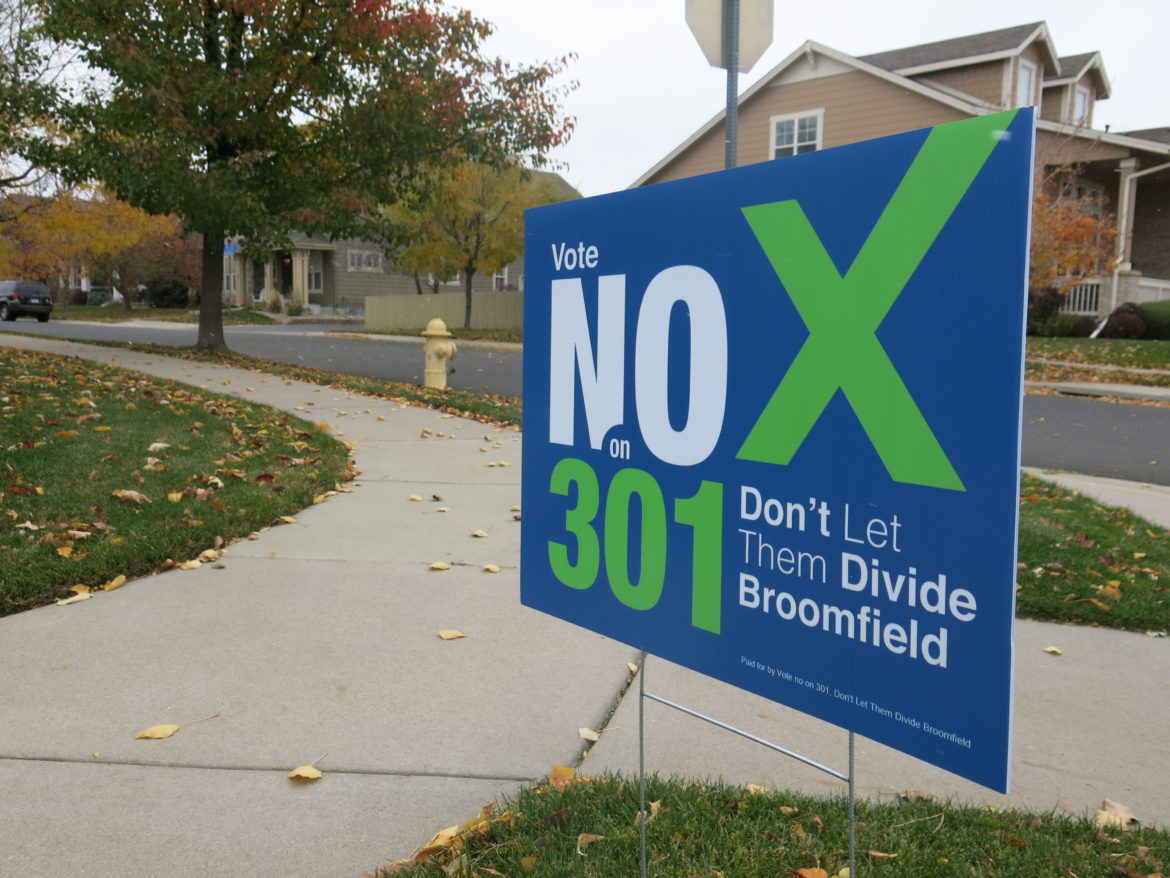 Pro-drilling groups are pouring hundreds of thousands of dollars into local politics in Broomfield, fighting a measure that could give the town more control over drilling. Ballot Question 301 is part of a much larger fight over health, safety, policy, and state law that’s playing out in towns across Colorado’s Front Range as oil and gas development moves in. In an email, Rich Coolidge, a Senior Strategist with Vital for Colorado explained what’s meant by “outside” interests:

“The business community and energy interests have reported their spending and in-kind contributions in Broomfield, but Sierra Club and Clean Water Action – through LOGIC, the group it created – have hardly disclosed a thing.

For example, at least two rounds of direct mail from the committee tied to the Sierra Club have been hitting Broomfield homes, and not a single dime of spending has been reported. As for Clean Water Action and LOGIC, neither group has reported any spending at all in Broomfield, despite the fact that LOGIC executive director Sara Loflin filed the petition to get Question 301 on the ballot in the first place back in June. LOGIC has been spent months on the campaign, gathering signatures, and running press, communications and events, and yet the only disclosure of the group’s involvement is a personal in-kind contribution from Loflin of less than $2,000 for several months of work.

Before you shrug off these groups, consider that Sierra Club and Clean Water Action have combined annual revenues well in excess of $100 million. They have money to spend, they are spending it, and they should be held to the same standards of scrutiny as everyone else. I hope you’ll consider doing your part to correct this obvious double standard.”

Note: All of Vote No on 301’s money comes from within Colorado but outside of Broomfield, in the form of donations from large groups representing oil and gas or business interests. The amount of money raised in support of 301 is tiny in comparison (see below), and about 30 percent of that money comes from outside the community.

In an email, John Noel with Clean Water Action responded to the statement above:

Campaign finance filings show that groups in favor of Ballot Question 301 have reported a relatively small amount of funds raised so far.

Why Is Ballot Question 301 So Contentious?

Vital for Colorado would not talk to me for this story but Senior Strategist Rich Coolidge responded to questions via email.

“Vital for Colorado is a coalition led by state business leaders and it represents the business community in the energy debate. We oppose any and all efforts by national anti-oil and gas groups to cripple one of the state’s most important economic sectors, though their political campaigns at both the state and local level.”

“Gas and oil will spend by and large what it takes. I think their feeling is that if they lose one city, they will lose many cities and so their goal is to try to win as much as possible.… they recognize –not only is this a rich state in terms of gas and oil so it’s a state they want to continue to mine– but they recognize that what happens in Colorado could then happen in many other states.”

Ciruli says that industry spending on these local oil and gas battles has been going on for a while, in Colorado and in a handful of other states:

“Because they recognized… that, and this was not unique to Colorado, it was going on in New York, Pennsylvania, and California and other states, that they were vulnerable to environmental arguments mixed with NIMBY [not in my backyard] neighborhood-style arguments that essentially said that you are not good for the environment or my community.” A pumpjack sits in front of a house in northern Colorado. An drilling rig sits behind it.

In Colorado, that argument is getting more and more intense thanks to a powerful mixture of factors: the state’s history of local control, purple state politics, strong environmental values, and the fact that drilling and population are both growing at the same time, in the same places.

The money raised for and against Ballot Question 301 far outpaces contributions to City Council and mayoral candidates thus far. Of the 14 candidates for mayor or City Council, a dozen of have raised nearly $133,000 to date.

Those contests also revolve largely around the issue of oil and gas development. Two candidates have received money from representatives of Extraction Oil & Gas, a company working to drill in Broomfield. The Republican and Democratic slates are clearly divided – the Ds support 301 and certain candidates, the Rs oppose 301 and support different candidates

And there are outside interests stepping in.

Broomfield County Democrats endorsed a slate of candidates on their Facebook page.

An independent spending committee called Broomfield for a Stronger Economy reported no contributions or spending through Oct. 12. But since then, they’ve reported spending $12,000 for website and design for four of the candidates and $2,260 on mailers supporting two of those candidates. All those candidates are also endorsed by the Broomfield County Republican Party.

Here’s a look at money raised by various candidates:

Here’s What Else You Need To Know:

Extraction Oil & Gas has proposed a big oil and gas project in Broomfield: 84 wells across four pads, close to populated areas. Local officials, oil and gas task committee members, and the company have been in negotiations for months and months over the project, and tensions over it have played out at several packed public meetings. Recently, the City Council approved an operator agreement with the company. The health and safety measures detailed in the agreement go well beyond what the state requires and could set a new standard for how oil and gas operates in populated areas. Drilling is set to begin next year.

Other Front Range towns are dealing with oil and gas too. In October, Thornton was sued by two industry groups six weeks after passing new city rules for oil and gas development. Erie passed an odor ordinance this summer, amending the town’s public health and safety code to consider complaints about odors related to oil and gas drilling. Lafayette has given preliminary approval for a year-long drilling moratorium while local officials draft regulations. All of this is playing out against the backdrop of a deadly home explosion in Firestone last April. The incident was linked to a leaking gas line running from a well 178 feet from the property.

Editor’s Note: This post has been updated to reflect comments from Clean Water Action.