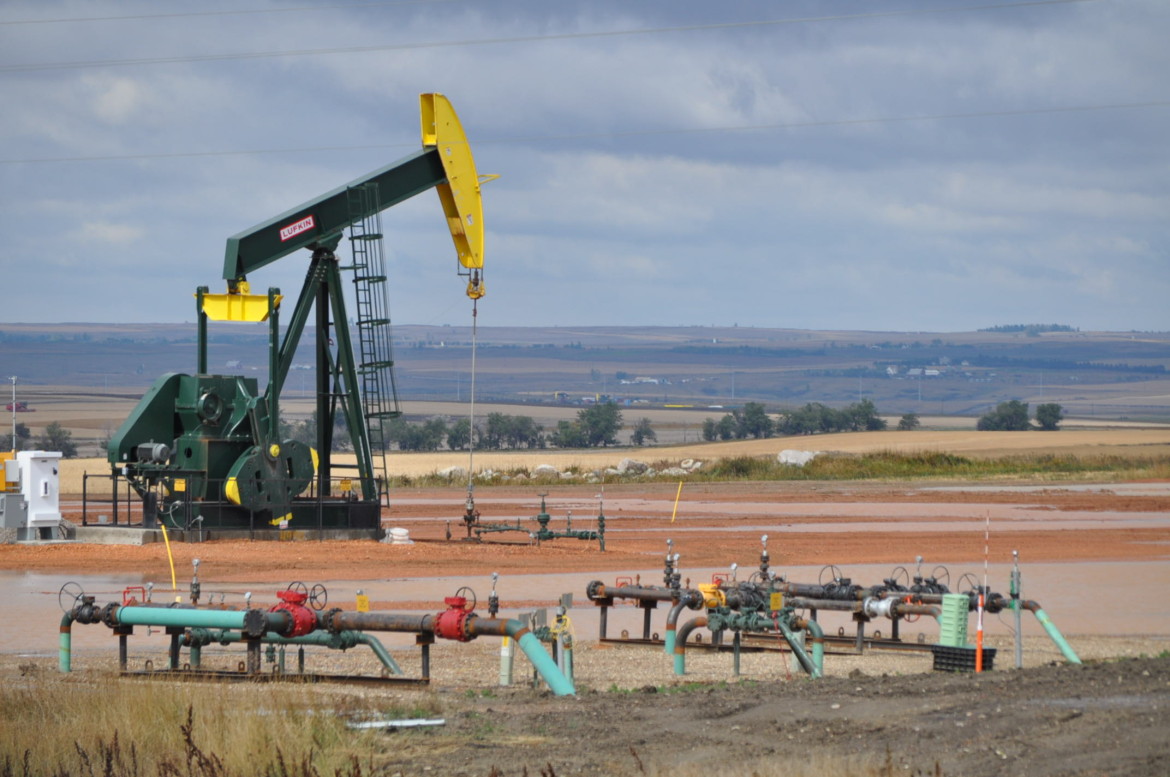 An oil well in North Dakota.

It is not hard to find evidence of the oil industry’s influence in North Dakota. Scenic photographs of drilling rigs hang above the baggage claim in the Bismarck airport, and billboards advertising energy jobs line the interstate. The industry’s influence on politics, however, takes a little longer to grasp. For a good primer, turn to Nicholas Kusnetz‘s recent story from the Center for Public Integrity.  It lays out in stark detail how a sparsely-populated state of Midwestern moderates has been courted and won over by an industry in need of political favors.

In the far-ranging piece, Kusnetz puts on oil-money-tinted glasses and shows how the industry influences everything in North Dakota. Those regulations aimed at reducing natural gas flaring that the Industrial Commission passed earlier this year? Drafted by the oil industry. The glassy, modern Heritage Center just outside the state capitol? Underwritten by Continental Resources and other energy companies. The regulators on the Industrial Commission who approve every well permit application in the state? Their campaigns were partially paid for by oil companies.

This last point is Kusnetz’s most important, and he hammers it home with statistics like this one:

In 2012, the industry gave at least $495,000 to political candidates. That may not sound like much, but candidates for the North Dakota House raised an average of about $4,500 that year, and it comprises more than 8 percent of all contributions to candidates, more than any other sector gave, according to an analysis of data collected by the National Institute on Money in State Politics.

All three elected officials — the governor, the attorney general, and the agriculture commissioner — who serve on the Industrial Commission have received money from oil companies, some more than others. Perhaps it’s not surprising that the state’s governor partly funded his last campaign with oil money, but even Doug Goehring, the agriculture commissioner, got a cut. In his last election in 2010, Goehring got more donations from the oil industry ($22,000) than any other sector except agriculture.

All together, the three Republican candidates in the (Dickinson) district raised more money from oil interests (in 2012), $20,000,  than the Democrats did from all donors combined, $19,900 — and the GOP swept the district by historic margins. “We were pretty much outgunned,” said Richard Brauhn, the Democratic Senate candidate, who raised $1,975 and mustered just 25 percent of the vote.

North Dakota’s experience may be unique because the state is so small and energy’s influence is so large. But energy money plays a huge role in politics everywhere — just look to how much the industry is looking to spend in Colorado’s fight over whether towns can say no to oil and gas development.

Kusnetz doesn’t tell us what to make of oil spending in North Dakota, but he doesn’t have to. Through telling examples of watered-down environmental and neighbor protection laws, frustrated landowners and lax regulations, he shows how North Dakota has become a veritable petro-state — a place where the costs of a domestic energy revolution that’s helping reduce our dependence on foreign oil and create thousands of new jobs are realized on a local level. Energy development is full of compromises, and reporters like Kusnetz bring these trade-offs to the forefront.