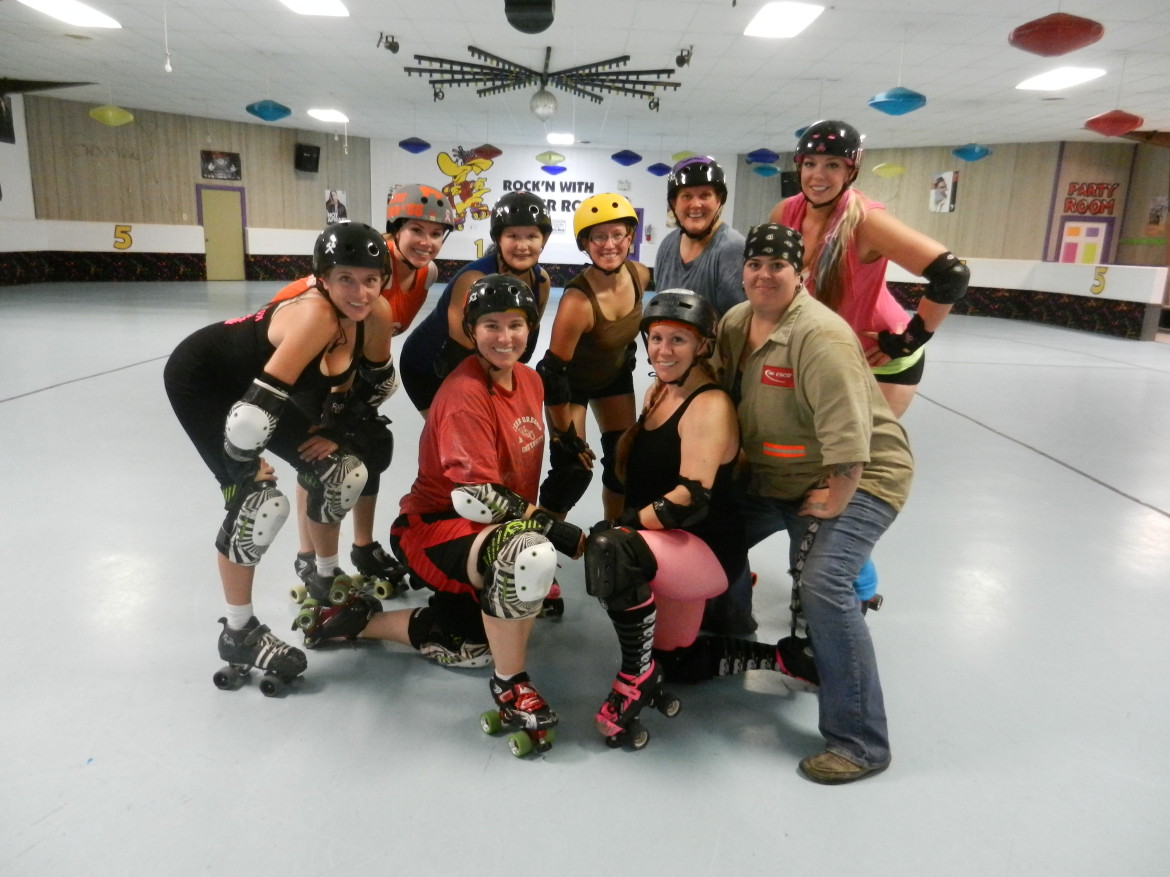 “We’re called the Coal Miner’s Daughters, number one because Loretta Lynn rocks!” Katie Buffington, president of the team, explained.  “Number two because coal is the main source of income in the area. And we really wanted to get back to our roots, where we come from.”

And yes, there are actual coal miner’s daughters on the team.  And others, like Buffington are coal miners themselves.

“Coal is so deeply rooted in the community that you really can’t go anywhere without meeting a coal miners daughter, at roller derby or not,” Buffington said.

Maybe that’s because one out of every hundred Wyoming residents works in the coal industry.  And the state produces a whopping 40% of the nation’s coal.   So, despite concern over climate change, competitive natural gas prices, and greater availability of renewables, Wyoming’s coal industry lives on.

In Gillette, a town of 30,000 in northeastern Wyoming, the hard black rock is everywhere you look: from the coal trains running right through town, to the ‘Friends of Coal’ bumper stickers, to the watering holes where miners blow off steam.

Lakeside Liquor & Lounge is a popular miner’s bar, just off the main drag in Gillette.  The day I visited, several men sat nursing drinks while the bartender made small talk.  It was a normal scene except for the time: 8am.

Troy Goodsell asked for another whiskey and coke, as he explained he had just finished the night shift, driving a haul truck at a nearby mine.  The son of two miners, Goodsell grew up in Gillette and has a deep appreciation for coal.  So, I asked him to explain to my grandmother in New York why she, or anyone else, should care about coal.

“Hi Granny in New York,” Goodsell said with a grin.  “Forty percent of your nation’s energy comes from coal, and we’re talking about electricity.  We have a huge pile of coal underneath our feet. Its easily obtainable, its not hard to get and its easy to make electricity out of.  So, what else would your granny ask hahaha?”

Between 2002 and 2012 coal production in Wyoming went up 8 percent.  But it fell substantially in the second and third top producing states: 19 percent in West Virginia and 26 percent in Kentucky.  And in that same time period, overall US production of coal decreased by 7 percent, according to the US Energy Information Administration.  So I went on a tour of Eagle Butte Mine, in Gillette, to find out what makes Wyoming coal different.

The pit we saw was massive: more than one mile long and laced with thick black coal seams.  On this grand scale, the coal hauling trucks, sporting wheels 13 feet high, look like toys.

My tour guide, Danelle Wilkerson, explained that most Wyoming mines are surface mines, like this one.  You can see right in.

“Well, back east, a lot of the mines are underground mines so they take the people actually underground 500 feet or more. With this, they’re just removing the dirt. The 200 or 300 feet over overburden. So its all open,” Wilkerson said.

Which means the coal is cheaper and easier to extract.  And Wyoming coal burns cleaner because of its low sulfur content.  So even under the EPA’s new plan to slash CO2 emissions by 2030, Wyoming would have to reduce its own emission rate by just 19 percent, which is less than most other states.  That could be good news for Wyoming’s cleaner burning coal.

But Tom Drean, of Wyoming’s State Geological Survey, is cautious.

“It’s a bit of a mixed bag on the coal industry. Many states have been hit harder than Wyoming but Wyoming has been hit too.  Prices have dropped.  Some of the companies producing coal in Wyoming have been economically challenged.”

The state’s largest coal company, Cloud Peak Energy reported large losses in their first quarter earnings this year, and smaller losses in the second quarter, published in late July.   If nothing else, these figures are a symbol of an industry in distress.

Back at roller derby practice, even Katie Buffington, a die-hard coal miners daughter, acknowledged that Wyoming’s industry must innovate in order to stay strong.

“Something does need to change. Because the way its going, some mines are doing better than others. And it is one of the main sources of income in this area.  If the coal mines were to shut down, so would Wyoming.”