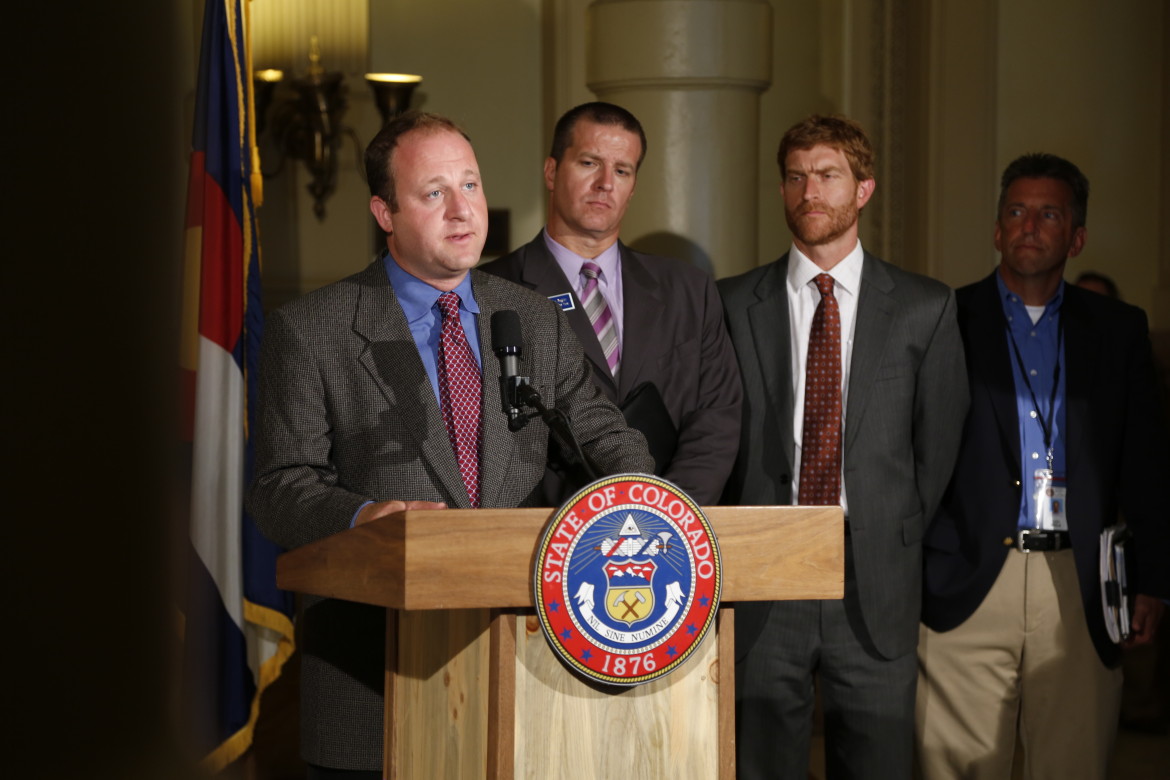 Congressman Jared Polis (D-CO) at the unveiling of the state's new oil and gas task force. Congressman Jared Polis (D-CO) at the unveiling of the state’s new oil and gas task force.

The Governor of Colorado announced on August 4th that he would convene a special task force to work on resolving conflicts between residents and the state’s oil and gas industry.

That announcement made the political establishment here breathe a huge sigh of relief. With his new task force, bringing together industry, environmentalists and the community, Gov. Hickenlooper is trying to put some of the unwanted attention on the state’s oil and gas development to rest.

As we reported, he unveiled it on the very day signatures were due for a handful of competing oil and gas ballot measures.

“This compromise is reached is by pulling back all four of those ballot initiatives,” he said at the capitol press conference on the deal.

These ‘Plan Bs’ cropped up after ‘Plan A’ failed –  state lawmakers were unable to pass compromise legislation on the topic.  Now, the task force will make recommendations to the legislature for 2015.

But Republican State Representative Jerry Sonnenberg said he wasn’t a part of this compromise. He was leading the effort for one of the pro-industry ballot measures and the Governor informed him after-the-fact of the deal that had been reached.

Initially, Sonnenberg had no intention of pulling his initiative. It wasn’t until he received a phone call from his oil and gas connections.

“They needed stability for their stockholders so they could continue to do business without a cloud of a ballot initiative,” he said.

If these measures would have made it on the ballot, the state was looking at a record-breaking political ad-spending showdown in the tens of millions of dollars,

“The entire Democratic Establishment came out against it, with the exception of Mr. Polis,” Cirulli said, referring to Colorado Congressman Jared Polis–a self-made tech millionaire who has been making a name for himself in national politics as well.

This year, Polis was putting all his financial and political weight into supporting both of the anti-fracking initiatives making their way to the ballot. Yet, when Governor Hickenlooper announced his task force compromise to stop the ballot measures, Polis was standing right next to him.

Cirulli said Polis was under ever-increasing pressure to back down.

“I think the pressure got so large that he began weighing the risks (of splitting Democratic voters.)”

Both Governor Hickenlooper and Democratic Senator Mark Udall are running for re-election this November, and both came out against the anti-fracking ballot measures that many of their environmental constituents strongly supported. Cirulli said both campaigns would have been drowned out by the political ad war over those initiatives.

“A significant part of which was going to attack them as being on the wrong side of the environment,” he said.

“The truth is there are a number of people within the Republican Party who are not happy with me,” said State Rep. Jerry Sonnenberg, “because they do think that was a political tool that would have hurt Democrats.”

But, he says he’s been convinced the oil and gas industry will be better off with this task force compromise.

That’s another group that breathed a huge sigh of relief with this ‘Plan C.’