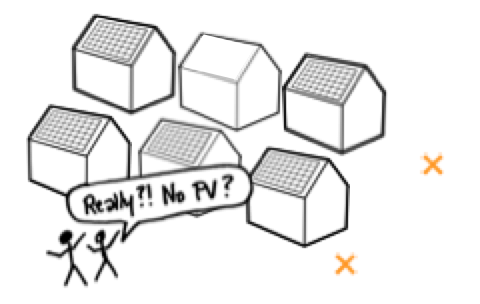 I still remember the first MP3 player I touched – it was the size of a fat sandwich and six times as heavy, with clunky rubber molding and a dim, finicky screen. It only held a couple hours of music. Why would anyone want one of these?

And then Apple released the iPod and changed – forever – the way we listen to music.

But the change didn’t happen right away. We resisted. The iPod was slick, and we all wanted one, but it was expensive, only for diehard Apple-heads. It took several years for the iPod to really take off.

Here’s a look at how the price of the iPod – per gigabyte of music it could hold – dropped over time: The price of an iPod, in terms dollars you paid per unit of storage, dropped sharply after the release of the first model in 2001. Data source: Brian Ford, Newsvine. By 2008, the iPod had jumped from 125,000 sales annually to nearly 55 million. Data source: Wikimedia Commons, compiled from Apple annual reports.

By the time 2008 rolled around, we were ready for the next disruption: Smart phones began cannibalizing the sales of MP3 players, and we’ve never look back.

Could rooftop solar panels be ready for a similar tipping point?

The drop in the price of a residential-sized solar system suggests that it is possible.   Rooftop solar currently costs less than half to install today than it did a decade ago: Today, the price per watt of a rooftop solar system is half what it was 10 years ago. Data source: Lawrence Berkeley National Laboratory.

Rooftop solar may still seem like a fringe trend, but the rate of rooftop installations (and the growth of net metering customers, who can sell power back to utilities) suggests solar is on its way to being mainstream: But Kegler thinks that’s about to change.

“I think three years out, if you build a new house in America and you don’t put solar on that house, that same group of friends, family and neighbors is going to say, ‘What happened, why don’t you have solar on that roof?’” Kegler said.

Of course, Kegler installs solar panels for a living, and has reason to be optimistic. Keep in mind, although solar is growing rapidly, it’s still a tiny part of our electricity infrastructure – only a quarter of a percent of U.S. homes have solar panels on their roofs. And solar panels aren’t, and never will be, iPods: The energy and entertainment industries operate under different economic, political, and social influences.

But whether or not rooftop solar is the next iPod, it is already reshaping the way our grid works, and the way everyone from small rural towns to national-scale utilities and power companies are thinking.