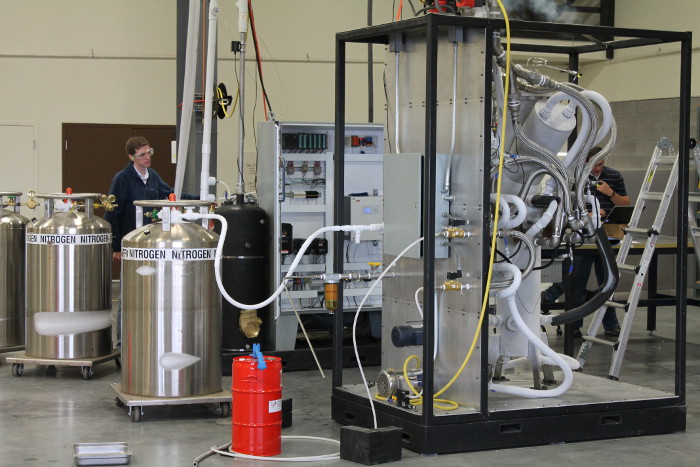 It’s a type of carbon capture technology, still in the research phrase, that separates out carbon dioxide or CO2 from carbon emissions by cooling the gas down to -135 degrees celsius.  That’s when the snow storm starts.

All sorts of science fiction-y research was on display at the University of Wyoming’s Clean Coal Technology Fund Research Symposium this week.  The Wyoming State Legislature has put over $40 million into this fund but, since its creation in 2007, very little of the technology developed by the 49 research projects involved has been built on a commercial scale.

Carbon capture, a potentially big part of clean coal innovation, isn’t just struggling to take hold in Wyoming.  Though it is a well-researched method, currently there aren’t any commercial-scale carbon capture facilities at any US coal-fired power plants. China, however, is home to one of the most advanced carbon capture systems in the world, a gigantic power plant called GreenGen, profiled earlier this year in Wired.

American coal could really use this some innovation right now. Both consumption and production are down nationally.  And this week, an export terminal that would have enabled US producers to export coal to Asia via Oregon, was shot down by a state agency.

According to Larry Baxter, it is all about funding.  “The scale of operation means it takes a couple of billion dollars to build a modern coal-fired power plant.  And our process is a significant add on to that plant.  Its hundreds of millions of dollars and the equipment is large and expensive. Getting to the point where people have the confidence to build technology that is that expensive and that large and try it on such a large scale is a huge  barrier.

During the forum, Baxter asked the keynote speaker, Jeane Hull, Executive Vice President at Peabody Energy, the world’s largest coal company and the only American with a share in China’s GreenGen facility, how coal can have a future when funding and interest in clean coal projects has been waning in recent years. Her answer: there is no silver bullet.