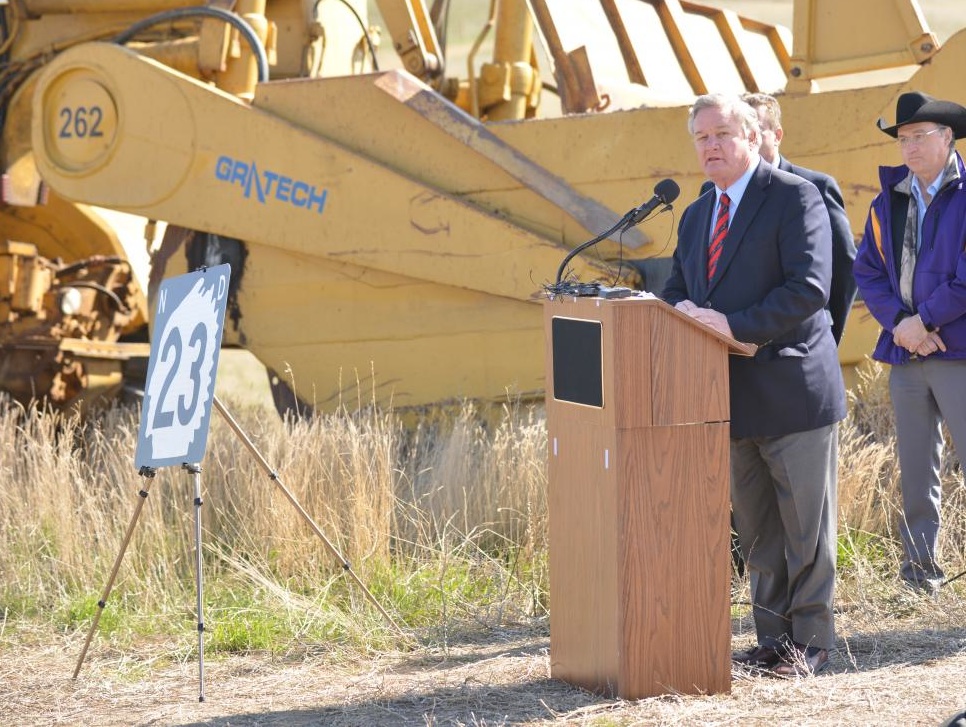 Gov. Jack Dalrymple speaks at the groundbreaking ceremony for the Watford City highway by-pass in May 2014, which will reduce oilfield traffic through town. Gov. Jack Dalrymple speaks at the groundbreaking ceremony for the Watford City highway bypass in May 2014, which will reduce oilfield traffic through town.

Inside Energy’s Emily Guerin spoke with North Dakota Governor Jack Dalrymple on Monday, September 15 about the state’s high worker fatality rate, especially in the oil and gas industry. During the interview, the Governor said he would ask his top safety and health officials to study the problem — his first major commitment of resources to the issue. Below is an edited version of their interview.

INSIDE ENERGY So in 2013, when the Bureau of Labor Statistics came out with new data showing North Dakota had the highest worker fatality rate in the country, you told The Dickinson Press the statistics were a matter of the businesses booming in our state. “If we were Connecticut and worked in office buildings all day long, we would have a much better rate.” And through some analysis we’ve done at Inside Energy, we determined that actually some of the dangerous industries we have here, like mining and oil and gas, some of them actually are more dangerous here than in other places. The oil and gas fatality rate here is three times the national average for oil and gas. Were you aware of that?

DALRYMPLE The statistics are, you know, a big concern for us. You know, we don’t like to see those kinds of numbers either. I think even within an industry like oil and gas, you have to realize that no two oil fields operate the same. And what we have is a new oil field opening up for the first time in history. It’s being developed from scratch basically. That’s much different from a mature oil field, say in Oklahoma, that’s been there for 60 years, and all the pipelines are in place and there’s very little truck traffic and things are virtually settled down.

Within oil and gas fatality statistics, one of the things that we notice is that almost 2/3 of the fatalities are attributable to transportation. And that tells us that we have a lot of people in western North Dakota on our roads and highways. And that is contributing tremendously to the fatality rate. And in the traffic area, we’ve done a lot of things to try to address that. For instance, we are in the process of turning a very long two-lane highway from Williston to I-94, turning that into a four-lane highway. And where we have completed that project we see instantaneously a big drop off in fatalities. Plus, we’ve sent 22 new highway patrolmen out into North Dakota, mostly Western North Dakota, to improve highway safety.

INSIDE ENERGY I’ve been talking with the National Institute for Occupational Safety and Health, they’re part of the Centers for Disease Control and Prevention (CDC), and they’ve done a lot of research dissecting the problem and figuring out what aspects are most dangerous. And in addition to the transportation issue you mentioned, they identified small companies and small drilling contractors in particular as having the highest fatality rates in the industry. Is there anything else you’re planning on introducing to address fatalities within the companies themselves?

DALRYMPLE We know from talking to our Secretary of State that there are literally thousands of new contracting businesses registered every month. So as this wave of small employers comes in, we try to get to them as quickly as we can. Make them aware of our programs through Workforce Safety and Insurance, TrainND, which is a program run through our two-year colleges, and also expose them to North Dakota Safety Council. So getting to the new arrivals is a big part of the challenge.

INSIDE ENERGY And do you think there is a place for a stronger enforcement presence? I know the Occupational Safety and Health Administration is federal here, not at the state level, but OSHA has known for 30 years that it doesn’t regulate oil and gas well enough. So knowing that other states have state-specific OSHAs, with oil and gas programs, is that something that you would ever consider to try to bring the rate down in this industry?

DALRYMPLE Well, our mind is open to any new approach that might be successful in improving safety. But we do rely on OSHA. It is a federal law that requires the employer to maintain a safe workplace. But in the end, North Dakota has had a somewhat different and I think better approach to workforce safety, and that is working through our Workforce Safety and Insurance Program we provide a lot of incentives to employers to do a better job of safety every day. We think that that is an effective way of making a difference in the workplace.

INSIDE ENERGY So I know that with other statistics related to the oil and gas industry here that have been high in North Dakota, like the percent of natural gas being flared, for example, you’ve come out and said, “This is an embarrassment for North Dakota. We’re going to make this a priority to bring this rate down.” Why haven’t we heard you say something like that about the workplace fatality rate here?

DALRYMPLE Well I think to some extent we feel we are aware of the situation. We feel the programs that we have in place are working. I don’t know, as far as some sort of public statement, we haven’t really thought about that very much because all of our cabinets are asked to focus on safety at all times.

INSIDE ENERGY So in 2009, in Wyoming, Governor Freudenthalcame out and said, “We have too many of our oil and gas employees dying.” And after that he convened a task force to study it, and I think the most interesting thing he did was, he hired an occupational epidemiologist to study worker fatalities as if they were a disease. And that’s a model that’s worked really well in Alaska for studying why commercial fishing and aviation there is so dangerous. And I’m wondering, is that something you would consider trying to enact here?

DALRYMPLE Well I think that it’s certainly appropriate for a governor to bring focus on something like that. There’s no doubt about that. Because you’ve brought this right to our attention and put it right in front of us, I will be talking to my cabinet members who can have an impact on this, to report to me on any ideas they have on improving what we’re doing, and maybe we will be able to generate an idea that could make a difference.