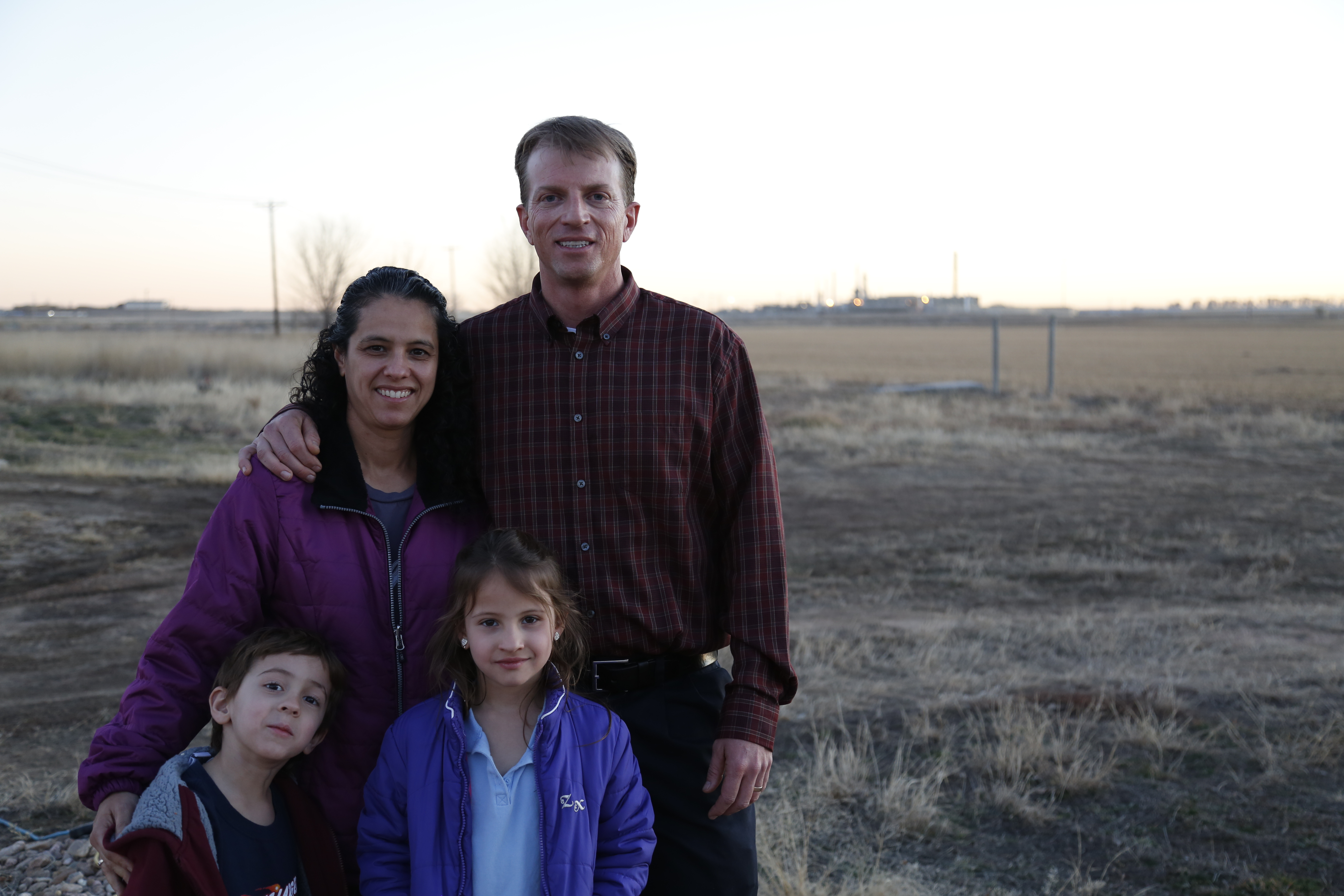 Eric Ewing pictured with his family outside of their home in Weld County, Colorado with a gas processing facility in the background. 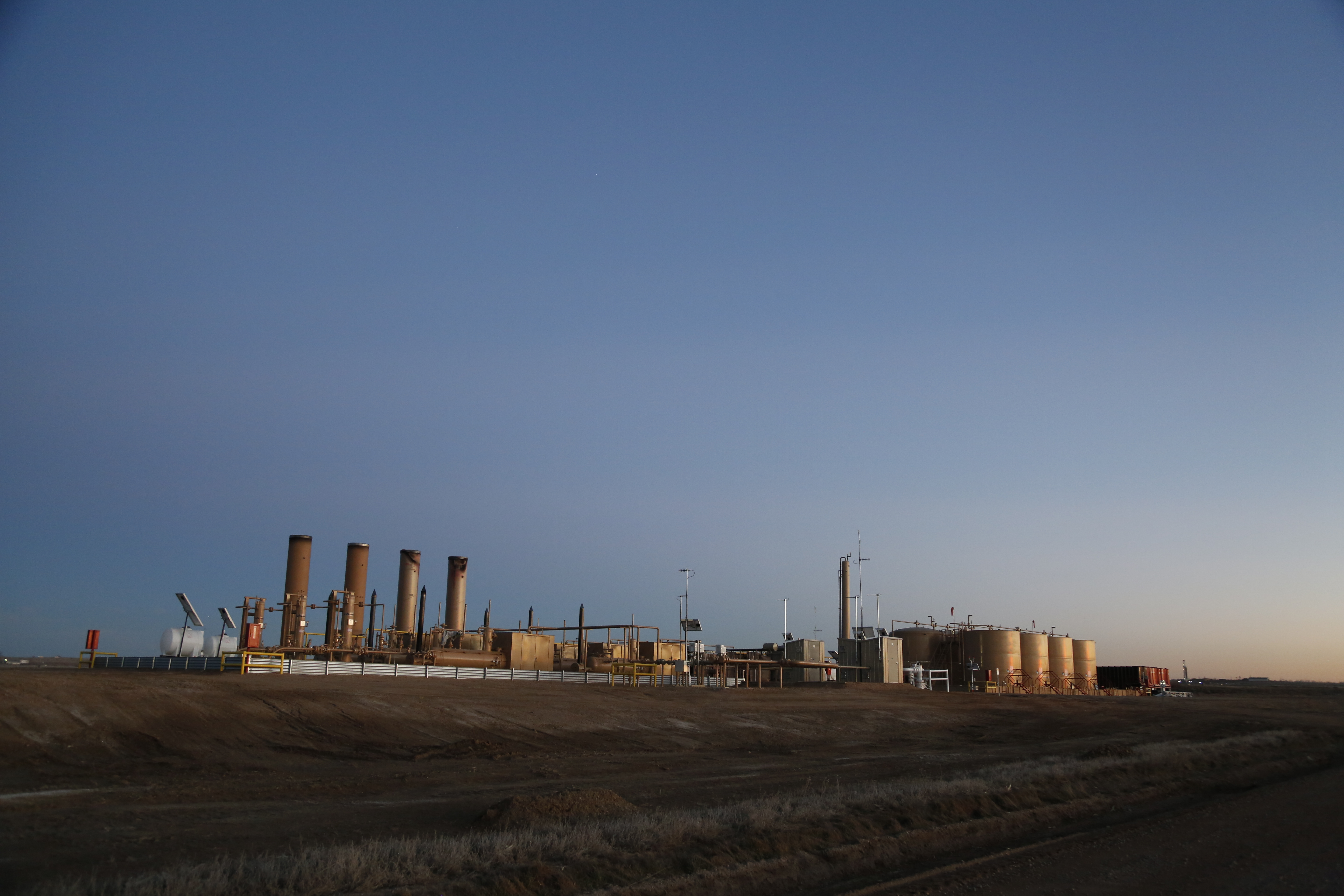 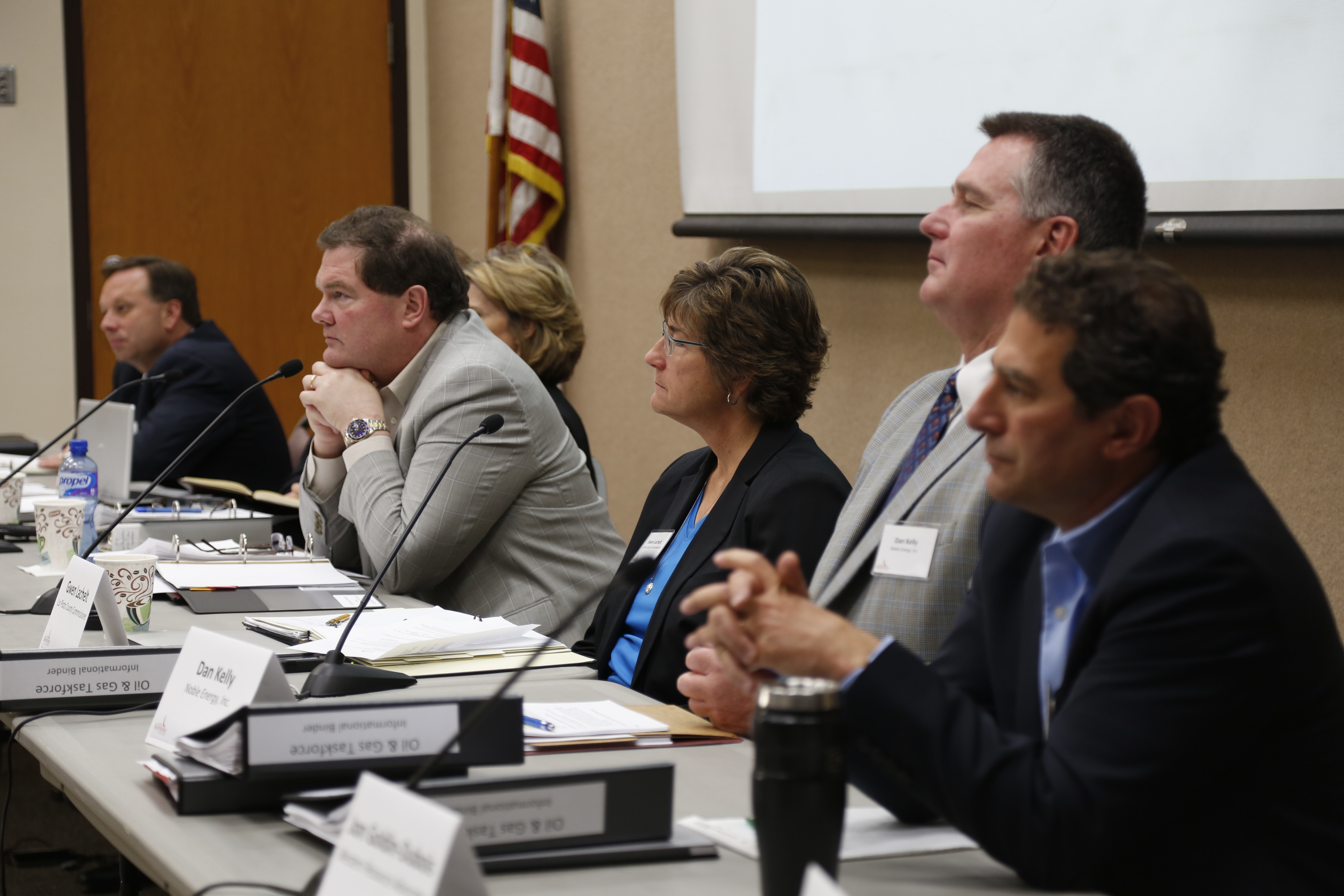 Gwen Lachelt (center) during the first meeting of the Oil and Gas Task Force.

For the first few years, Eric Ewing described his family’s two acre plot on the rural northern Colorado plains as heaven on earth. During a recent visit, however, the Ewing household was surrounded by the unmistakable signs of oil and gas production.

“It feels like I live in a factory now,” Ewing said.

There’s a large new gas processing facility a half-mile to the south, and clusters of wells and tanks within a few thousand feet to the west and north. This past summer, a well was drilled 650 from his home, just outside the state-mandated setback of 500 feet.

Ewing’s concerns about issues such as noise, air pollution and quality of life impacts are exactly what an oil and gas task force was formed late last summer to try to appease. The group was created by Colorado Governor John Hickenlooper’s office as part of a deal to avoid a handful of competing oil and gas ballot measures. But, time is running out for the group to submit policy recommendations to the Governor and state legislature following  two days of meetings early next week.

The 21 members, split between government leaders, industry representatives and citizens, have been meeting since last September to find ways to address the complaints of those who don’t want drilling next to homes and schools while protecting constitutional mineral rights and trying not to hinder the oil and gas production which is a major economic driver and job creator for the state.

The multi-day meetings so far have largely been information gathering. But this next meeting is critical to meet an end of February deadline for agreement on recommendations. The group can suggest state policy changes for the governor’s office with a simple majority. Yet, two-thirds approval is needed for the group to formally suggest actual legislation to state lawmakers.

So far, Lachelt sees two broad areas of agreement: Large oil and gas facilities should be located further from homes and communities and more staff are needed at state regulatory agencies.

But, will these discussions result in anything more than suggestions. Could real legislative action come out of the meetings? At this point, Lachelt is skeptical.

“I’m hoping I’ll be surprised,” she said, “but given how political these issues are and let’s face it, the drop in oil prices will likely have an impact on the industry members of our task force.”

Falling oil prices are likely to make the industry participants less willing to support expensive compromises. The representatives of the task force from oil and gas companies declined to go on tape for this story. But, in an email response, task force member and Anadarko Petroleum Vice President of Operations in the Rocky Mountain Region Brad Holly said:

“Unnecessary and unproductive regulatory burdens on any industry are very costly, and can make it challenging to continuing invest capital in technology and infrastructure, particularly in a lower-commodity price environment. Regardless of commodity prices, Anadarko is going to continue to listen to concerns and collaborate with stakeholders to find reasonable and constructive solutions.” “The industry, I think, wants to be good neighbors,” he said, “and they really want to find a way to work with local communities.”

Despite the impacts on his personal life, Eric Ewing does not consider himself against the oil and gas industry broadly.

“Yeah, I mean, we have family that drill,” Ewing said. “We need energy.”

Yet, living in Weld County, where oil and gas is so often viewed as a major boost to the economy, Ewing says the production near his house has cost him $5,000 in the last year between lost wages, medical bills, and legal costs.

Regardless of what the oil and gas task force comes up with, Ewing said his family is looking at the possibility of relocating.