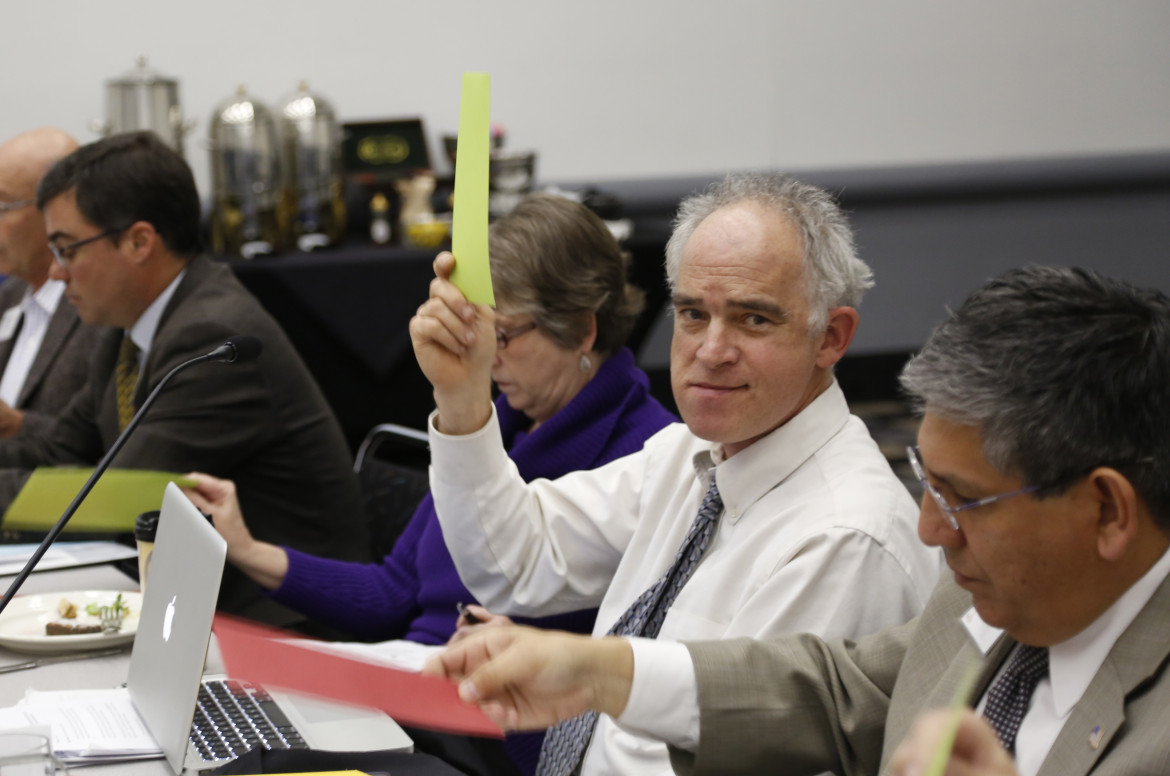 Task force member Will Toor holds up a green sheet to vote in favor of a policy recommendation during the group's February 3rd meeting.

Task force member Will Toor holds up a green sheet to vote in favor of a policy recommendation during the group’s February 3rd meeting.

The group, formed last September to tackle one of the states most divisive issues, is tasked with finding compromise between the oil and gas industry and the communities that host their activities. They have whittled their list of suggested policy changes from 56 down to about 40. These range from hiring more staff at oil and gas regulatory agencies to requiring greater disclosure of chemicals used in the fracking process. But, task force member Jon Goldin-Dubois said he worried the industry members of the group will not come to substantive compromise on the biggest conflict, giving local governments more control over where drilling can take place:

“If we don’t address that, we will have failed,” Goldin-Dubois said.

As reported by the Denver Post, the task force did advance a proposal requiring drillers seek local approval before applying for state permits. Local governments and operators would go through a mediation process if there was disagreement. The measure is less than what the local control advocates wanted, and members like Goldin-Dubois said it doesn’t go far enough.

Also, the Associated Press writes that proposals to increase the distance between homes or schools and drilling operations most likely will not be advanced by the task force.

Industry members of the task force have declined interview requests. But, President of the Colorado Oil and Gas Association Tisha Schuller was watching the proceedings. She said the past five months of meetings have proved there are no easy answers to these conflicts. She pointed out many of the recommendations suggested by industry members have been warmly received by the group as a whole.

“It seems to me that real collaboration is happening,” Schuller said, “and all the participants are trying to work towards complex solutions that aren’t going to meet everyone’s needs but are going to move the process forward.”

The task force will meet for the final time on February 24th, at which time they will take final votes on the policy recommendations. Those receiving at least a two-thirds vote will advance to either the legislature or to the governor’s office for consideration.