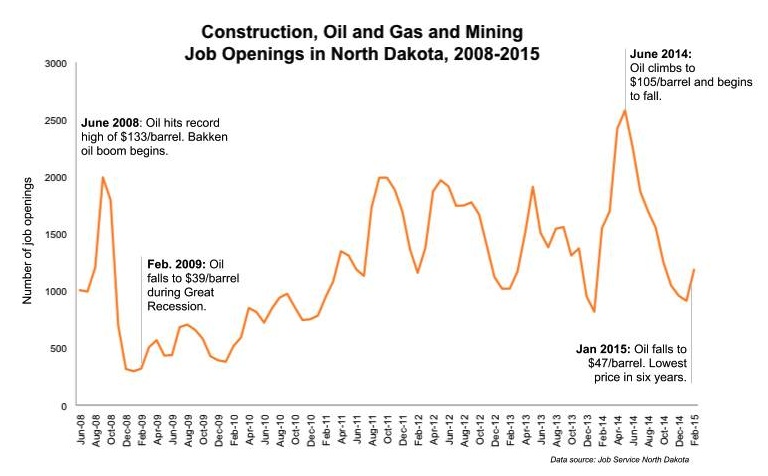 If you’re a rabid Inside Energy follower, you know we’ve been reporting a lot recently on the fallout of falling oil prices in this country. We’ve been focusing a lot on North Dakota, the nation’s second-largest oil producing state, whose economy and demographics have been transformed by the Bakken oil boom.

We’ve been hearing stories of oil workers getting laid off or seeing their hours cut. We wanted to know if those stories are showing up in employment data.

The quick answer is: Not yet.

Let’s take a look at this chart, which plots the number of job openings in the oil and gas, construction and mining sector. One thing really stands out: that high peak on the right side of the chart in June 2014. There were way more job openings then than at any point since the Bakken oil boom began, back in 2008. That date also coincides with really high crude oil prices, over $100 a barrel.

By January 2015, though, crude had dropped to its lowest point in six years. Job openings fell, too, as we would expect of a seasonal industry in the winter time. But they fell pretty low, lower than in the winter of 2012 or 2013. Perhaps that’s where falling crude oil prices come into play?

The other thing that stands out on the chart above is the volatility in employment: there are a lot of ups and downs. Oil and gas (as well as construction) is a very seasonal activity, with huge hiring sprees in the summer followed by massive lay-offs in the winter. This is North Dakota, after all: Who wants to operate a drilling rig or lay pipeline at -10˚F?! We plotted one more thing too: the ratio of open jobs to active resumes, which is an indicator of whether there is a labor shortage or whether jobs are pretty hard to come by. Nothing stood out.

Conclusion: With the data we have, which don’t go beyond February 2015, it’s too soon to say what effect low oil prices are having on the job market in the Bakken.

We’ll keep tracking this stuff, though, as data from later in the winter become available. Come spring, when hiring would normally start back up, we’ll begin to see the full impact of low oil prices.