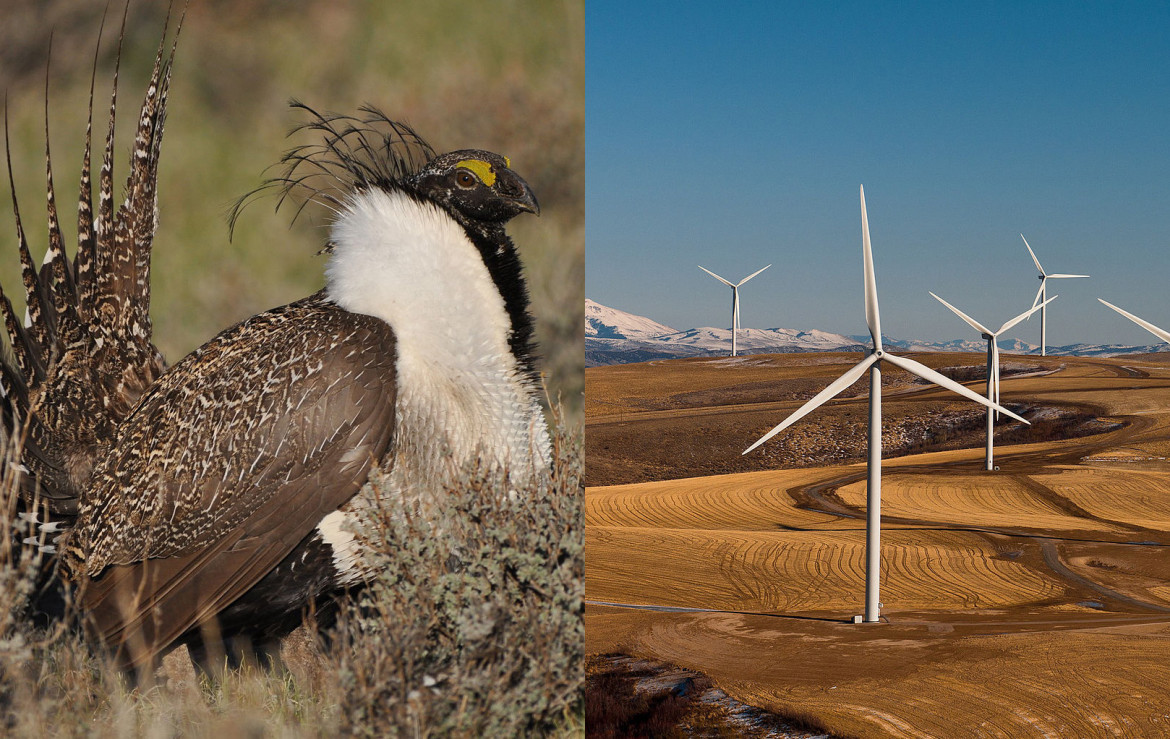 The US Fish and Wildlife Service is mulling whether to list the greater sage grouse as endangered this September. Effects from wind energy development may play a role in that decision. The US Fish and Wildlife Service is mulling whether to list the greater sage grouse as endangered this September. Impacts from wind energy development may play a role in that decision.

A chicken-sized game bird native to western sagebrush has become the subject of the biggest conservation project in U.S. history.

Efforts to keep the greater sage grouse off the endangered species list stretch across 11 states from North Dakota to California. It is a complex balancing act between saving critical ecosystems while at the same time protecting the region’s key industries.

Energy development is a key threat to the sage grouse, and some western conservationists are speaking out most urgently against a power source often thought of as one of the greenest — wind farms.

“It’s deeply frustrating to see the wind turbine put on the rear bumper of someone’s car as an expression of how green their attitude is,” said Brian Rutledge, Director of the Audubon Society’s Wyoming Chapter. He was speaking to a group of journalists traveling to what could become the country’s largest wind farm, the Chokecherry/Sierra Madre.

Government agencies like the Bureau of Land Managment, the Fish and Wildlife Service and the US Geological Survey agree that sage grouse naturally avoid tall structures out of fear they provide a perch for predators and the Chokecherry/Sierra Madre wind farm would be full of tall structures. Conservationists fear sage grouse would likely avoiding the entire 2,000 acre spread of wind towers. Add that to the hundreds of miles of gigantic transmission towers that would march down to Nevada. Brian Rutledge of the Audubon Society’s Wyoming chapter believes wind power is the biggest energy threat to the sage grouse.

Rutledge believes humanity needs to transition to clean power sources to combat climate change. But, he would vote for oil and gas development on sage grouse habitat over wind energy, if he had a choice.

Yet, the region boasts some of the country’s best wind energy potential. The proposed Chokecherry/Sierra Madre project would install 1,000 turbines, hundreds of feet tall each, across thousands of acres of southern Wyoming sagebrush.

The developer of the wind farm, the Power Company of Wyoming, said it is looking to offset the impacts of the project’s windmills.The company has spent about $3 million on studying just sage grouse in the area so populations can be closely monitored before and after construction, vice-president Gary Miller said. Also, conservation easements will cover nearly 28,000 acres of ranch land near the wind farm to preserve the sagebrush.

The 700-mile long transmission line called Transwest Express is also drawing the ire of sage grouse advocates. The line would carry the farm’s power output from Wyoming through Colorado and Utah before ending near Las Vegas.

“Most folks feel like that’s the most appropriate place for development, put it out there, no one cares about that,” Schafer said. “Well I care about that, and sage grouse certainly care about that.”

Schafer hopes the Bureau of Land Management, which has to approve the route, will choose a different path for the transmission line, one that is less direct, but follows already existing highways and power lines.