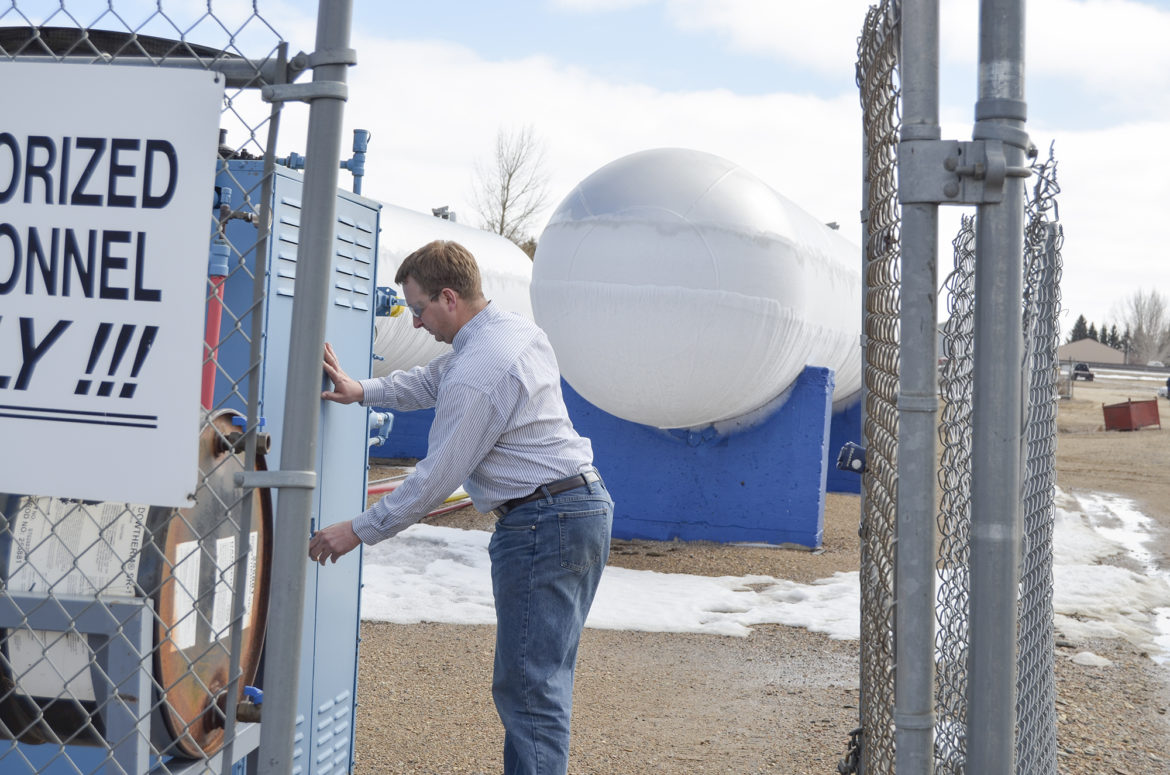 Jeff Duchscher of Rugby Manufacturing checks on the propane tanks outside his facility.

Big gaps exist in rural America where natural gas does not reach. These areas rely heavily on propane, with 12 million homes that use it for heating.

One North Dakota town is looking to make the switch, pushing the Legislature for flexibility to craft its own plan to bring in natural gas service.

“We’re blessed with good water, good schools, great health care,” said state Rep. Jon Nelson, R-Rugby. “But where we get hung up in attracting industrial growth is the lack of natural gas.”

Three thousand people call Rugby home. Though small in population, it’s a regional hub in northern North Dakota where it’s the biggest town an hour’s drive any direction. It maintains a large grain elevator and a truck parts manufacturer, as well as plenty of small businesses like a flower shop and fabric store.

Rugby relies mainly on propane and electricity for heating, and to fuel industrial processes. So do more than 300 other small North Dakota towns, and thousands more throughout rural America.

Community leaders in Rugby say gas heating could save large commercial users thousands of dollars a year, and provide savings for homeowners. It could also attract new businesses.

And they tout it as a way to put Bakken gas to use.

North Dakota has one of the nation’s most productive oil fields. For years, excess gas that came to the earth’s surface when drilling for oil was flared off. The state did not have infrastructure in place to capture it, but that’s now changing.

“The irony is you have a lot of gas in your state,” said Kyle Rogers, vice president of government relations for the American Gas Association. “Your gross domestic product could potentially go up exponentially because you can attract manufacturing to use that natural gas.”

But at what cost? It’s $1 million per mile to extend a natural gas pipeline to a new community. The closest line to Rugby is 20 miles away.

People in Rugby have an idea. Avoid a pipeline altogether and set up their own natural gas “island.”

“We’ll bring a couple vendors in and look at what it would take to set up a liquid natural gas or compressed natural gas plant in town, put some basic trunk lines in and go from there,” said the Rev. Tom Graner, priest at the local Catholic church and president of the town’s Job Development Authority.

One option for carting in gas in liquid or compressed form would be train. They roll through town all the time. Or gas could be trucked in, just like propane.

Rugby would install a small distribution line network to carry gas to consumers from the plant it builds.

But there’s a holdup — the North Dakota Public Service Commission.

PSC regulations are geared toward big utilities with a $150,000 fee any time there’s a rate change.

“While our regulatory oversight isn’t hugely burdensome, for a company that’s operating on really tight margins like they would be to make something work in a smaller town, it can make a big difference,” Commissioner Julie Fedorchak said.

So Nelson, the legislator from Rugby, with Fedorchak’s support, proposed a bill this legislative session modeled on a Minnesota law. Small towns could seek a waiver from PSC oversight to craft a plan to bring in natural gas. Rugby would likely be the first town to try it.

It cleared the legislature this month.

North Dakota’s not alone making this a priority. States from Mississippi to Connecticut are trying everything from offering tax credits to rebates to low-interest financing to bring in gas.

In North Dakota, these ideas face opposition from the state’s propane trade association.

“We can’t stop any utility company from coming in and supplying natural gas to a community. But we don’t believe the state or anyone else should be involved in helping to set an unfair playing field,” said Mike Rud, executive director of the North Dakota Propane Gas Association.

His organization has successfully fought against other state efforts to subsidize the extension of gas service to rural communities.

Another potential loser if natural gas is extended are rural utilities.

But Josh Kramer sees an upside if new businesses are drawn to the area. He’s general manager of the North Dakota Association of Rural Electric Cooperatives.

“It’s going to bring people to that community or living around the community and they’re going to need electrical service as well,” he said.

In Rugby, some local businesses are eager for the change.

Rugby Manufacturing makes metal bodies for the back of trucks.

Rugby Manufacturing uses propane for heating its facility and to fuel the painting process for the truck equipment it makes. It can be expensive, with the price fluctuating a lot, affecting his bottom line.

“We’re selling products throughout the entire country,” general manager Jeff Duchscher said. “A lot of our competitors that aren’t in these colder climates, that’s one area they don’t have to deal with that we do.”

He thinks natural gas is the way to go to ensure that stability, and a way to keep towns like Rugby on the map.