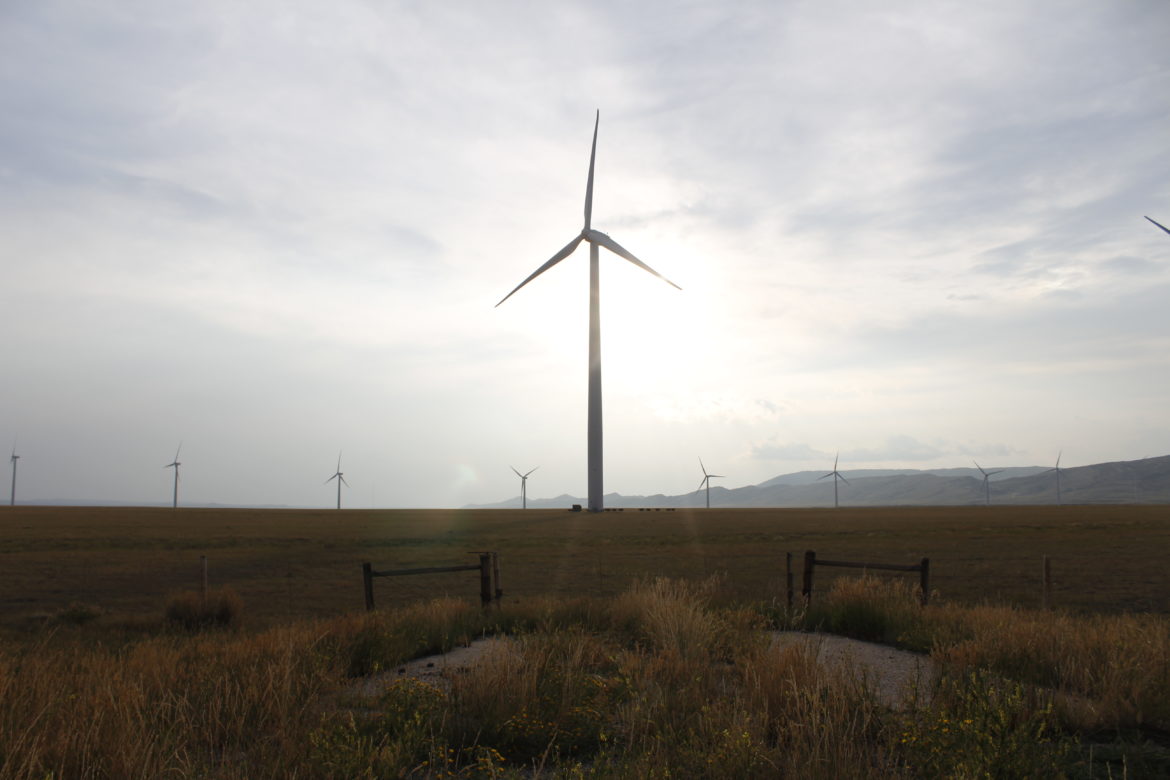 A wind farm churning off Highway 487 between Medicine Bow and Casper, Wyo.

Over 80 percent of new wind power last year went up in states that voted for President Donald Trump. It may sound strange when Trump’s aim is to bolster coal, not wind, but what red states usually promote is individual choice and a smart use of money. Now, wind power large and small is literally changing Wyoming’s energy landscape.

Some of that changing landscape will be around Chugwater, Wyo., population 212. Chugwater claims the state’s oldest operating soda fountain. Finding farmer Gregor Goertz was more of a challenge.

About 9 miles north of Chugwater , I turned west. Then I turned north. Finallly, east. Then I got lost. “I could so easily be stuck out in fields for days,” I muttered to myself.

I finally broke down and called Goertz who told me I needed to turn by the large, round hay bales. I eventually found him driving a large John Deere tractor, seeding a wheat patch for next year.

“We have a dry land wheat farm and we have a ranch,” he told me. “And we also direct sell livestock to consumers. Freezer beef.”

He said farms and ranches here are surviving on narrowing margins, and last year was especially hard: his wheat crop was a complete failure. It was too dry. That’s on top of low wheat prices to begin with. “With the price of commodities now, it’s going to take something to supplement our income or we will be the next ones to fall out and sell off, and it would probably be sold off in 40-acre plots and be housing developments.”

That income supplement will be wind turbines. A few years ago, Goertz got a bunch of farmers together to form an association to pool properties and attract wind energy companies. They now have a contract with wind company Pathfinder Renewable Wind Energy, which will put up the turbines once they find a buyer for all that wind energy.

Jim Lerwick is a member of Goertz’ association. I met him at his home near Albin, Wyo., in the southeast corner of the state.

He has thousands of acres spanning areas in Chugwater, Albin and even Nebraska. He said wind is just another way to make his operations profitable. A wind turbine on a ranch bordering Highway 487 between Medicine Bow and Casper, Wyo.

Wyoming is an energy state with oil, coal, natural gas and wind. In the past there’s been stiff opposition to the expansion of wind power.

Critics here say federal wind subsidies – production tax credits — give wind an unfair advantage. The turbines destroy Wyoming’s expansive views, they say, and besides all that, the wind energy wouldn’t provide power for Wyoming — instead, the market is likely the west coast. California wants 100 percent renewable energy by 2045.

All that can rile Wyomingites.

The state is one of only two in the nation that levies a tax on wind production. Last year, Republican State senator Cale Case proposed raising that tax, saying if California wants the wind,  “they should pay to compensate future generations of Wyoming’s children for something they’ll never have, which is that viewshed.”

Rep. Tyler Lindholm said the bill is likely going to come back at this year’s legislature.

“I think we’ll probably see something,” he said.

Lindholm said he looks forward to a discussion if it does. Another bill proposed in the Wyoming legislature last year would phase out all renewable energy in Wyoming, which Lindholm said he wouldn’t support.

Despite opposition, there may be a lot of new wind turbines on the horizon. There are two massive private projects going up in the state, both among the largest in the world. And earlier this year, regional utility Pacificorp announced a multi-billion dollar plan to upgrade and expand wind production in Wyoming. And they already have customers across six states. “Obviously, when you’re choosing to invest $3.5 billion in projects, that’s based not on politics, it’s based on business strategy,” she said.

Part of this new investment can be seen out on Pacificorp’s Glenrock wind farm where massive, new turbine parts sit on the ground, ready to extend the life and increase efficiency of the fleet.

Pacificorp now generates nearly 60 percent of its electricity from decades-old coal plants, but now wind can compete with cost of coal.

The economics are pushing wind, and so are politics. Federal wind subsidies will only help projects completed by the end of 2020. So Rocky Mountain Power wants permitting for their new plan to go through quickly. Once that’s complete, Rita Meyer says construction isn’t a problem.

“We are really good at building things,” she said with a smile. In the next five to ten years, there are plans to build more than 2,000 turbines across the state. Wind will be taking its place as one of the major sources of energy in Wyoming, right alongside coal, oil and gas.

While a lot of the wind energy will flow out of the state, it could bring extra income into these conservative rural areas; a helping hand for farms and ranches.

One rancher already benefitting is Mark Eisele. He has a century-old cow ranch out by Cheyenne where his grandparents homesteaded. Between his land and some leased land, he profits from 34 turbines. Over the last 10 years, he said that income has allowed him to improve his property, his business, and make enough money to bring his kids home.

“The real reason we were excited about it was because it gave us the ability to bring some young folks back to the ranch, and also generate some income that would level out some ups and downs of the cattle business,” he said.

He also said it will preserve the open spaces that make the area iconic: saving his ranch from being sold off to become a subdivision.